On Thursday, February 25, the Joe Biden administration bombed Iraqi Shi’ite militias in Syria, killing between 1–22 depending on who’s doing the reporting. Why did Biden order this strike?

On February 15, there was a rocket attack in Erbil, the capital city of semi-autonomous northern Iraqi Kurdistan, which killed a Filipino contractor working for the U.S. coalition and wounded six others, including an American guardsman. Iraqi Shi’ite militia Awliya al-Dam took credit for the attack, according to the semi-credible SITE Intelligence Group and the hawkish Washington Institute for Near East Policy.

Word quickly spread that this militia was backed by Iran. Therefore, the attack was blamed on them, even though the New York Times admitted that "little is known about the group, including whether it is backed by Iran or related to the organizations that used the facilities the American airstrikes targeted on Thursday."

But it was close enough for government work. Ten days later, Biden bombed two other possibly unrelated Iraqi Shi’ite militias, Kataib Hezbollah and Kataib Sayyid al-Shuhada, also supposedly (and KH at least) backed by Iran. But why in Syria?

Michael P. Mulroy, former Deputy Assistant Secretary of Defense for the Middle East, told the Times, "The decision to strike in Syria instead of Iraq was likely to avoid causing issues for the Iraqi government, a key partner in the continuing efforts against ISIS. It was smart to strike in Syria and avoid the blowback in Iraq." 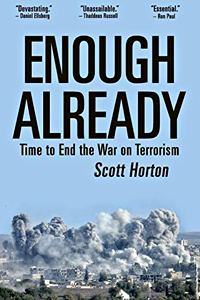 But why would U.S. strikes on Iranian-backed militia targets in Iraq cause blowback if hitting similar groups across the border wouldn’t? And what are Iraqi militias doing in Syria anyway?

Iranian advisers and Iranian-backed Iraqi militias are helping Syrian forces fight ISIS and al Qaeda, just as they help the Iraqi army fight ISIS. But in Iraq, the U.S. is aligned with the same government the Iranians and the Shi’ite militias are. In Syria, America remains opposed to the government and, in effect, have just scored a minor blow on ISIS’s behalf against them. That is why the administration figured that if they hit their enemies in Syria it would cause them fewer problems with the government in Baghdad.

Still confused? As noted in the Odierno Report, the U.S. Army’s official history of Iraq War II, Iran was the "only victor" of that war. After the U.S. invaded in 2003, the minority Sunni Arab-dominated Ba’athist dictatorship was replaced by the tyranny of the Shi’ite Arab majority. This also pushed the Sunnis into an alliance with the newly formed terrorist group, al Qaeda in Iraq (AQI).

Gen. David Petraeus’s "El Salvador Option" and later "surge" escalated matters by putting the U.S. military at the service of also-Iranian-backed Shi’ite death squads such as the Badr Brigade, building the Iraqi army from their ranks and waging a deadly sectarian "cleansing" campaign in Baghdad that changed it from a mixed city in 2003 to more than 85% Shi’ite by the end of 2007. The next year, Iran’s allies in the Iraq government told Bush to sign on the dotted line and leave. The U.S. had helped them win the civil war, and they didn’t need us anymore.

Bush’s government realized their error in empowering their major regional rival by the end of 2005. As Seymour Hersh revealed, in 2006, even while they continued to fight for the Shi’ite factions, the U.S. launched a project called "the redirection," in alliance with the Saudis, to attempt to make up for their Iraqi blunder. This meant allying with the Saudis’ support for the Muslim Brotherhood in Syria and the extremely dangerous bin Ladenite terrorist group Jundallah in Iran.

This was the policy Barack Obama picked up and expanded, especially with his support for the uprising in Syria beginning in 2011. When asked by The Atlantic‘s Jeffrey Goldberg if he agreed that removing the Iranian-allied Alawite dictator Bashar al-Assad from power in Syria would be a good way to weaken Iran’s influence in the region, the president replied, "Absolutely," and joked that he could not elaborate because Goldberg’s security clearance wasn’t high enough. This policy was, as Secretary of State Hillary Clinton’s adviser Jamie Rubin wrote to her in a memo later published by WikiLeaks, the "real reason" to seek regime change in Syria.

But that was what al Qaeda wanted too, and the Obama administration knew it from the beginning. Former Dick Cheney aide John Hannah revealed as early as April 2011 that Prince Bandar bin Sultan, former longtime Saudi Ambassador to the United States, had been put in charge of Saudi intelligence and had already begun to send fighters off to Syria to join the jihad against Assad. By February 2012 Clinton acknowledged that al Qaeda was supporting the uprising in Syria. By the end of the year, her spokesperson Victoria Nuland admitted that the "al-Nusra Front" leading the uprising in Syria was simply an "alias" for AQI, which had slaughtered U.S. troops and Shi’ite civilians alike during Iraq War II.

But our government hates their regional adversary, Iran – especially after handing Baghdad over to their best friends in the last war – more than the actual enemies of the American people, al Qaeda. So Obama ordered the CIA to work with our Middle East allies to funnel billions of dollars in cash and weapons to this insurgency, fully aware it would end up in the hands al Qaeda in Iraq in Syria.

In 2013, the Iraqi-dominated faction of AQI, which had renamed itself the Islamic State of Iraq at their lowest point in late 2006, broke away from the authority of al Qaeda, added "al Sham" ("the Levant") to their name and consolidated a state in eastern Syria. A year later, they rolled into predominantly Sunni western Iraq, erased the old border between the nations and declared the Caliphate.

Of course, the creation of the ISIS Caliphate was too embarrassing for the U.S. to let stand, so in August 2014, Obama launched Iraq War III, which again put the U.S. on the side of the same also-Iranian-backed Shi’ite militias and parties they wished they hadn’t fought for in Iraq War II – the regret that caused them to back al Qaeda in Syria against the Shi’ite-tied and Iranian-allied Damascus government in the first place. Without irony or admission of any wrongdoing for supporting both Bush’s policy in Iraq and Obama’s policy in Syria, then-Senator John McCain complained that we were again, "flying as Iran’s air force" in Iraq.

Even though the U.S. could not help but to align with the Shi’ite-dominated government they had created in Baghdad, and their Iranian friends, to fight ISIS in Iraq, on the Syrian side of the line, Obama couldn’t bear to admit that they had just been wrong and to call off the effort against Assad. The U.S. would only work with the Syrian Kurds to fight ISIS in Syria’s east, while still continuing to back al Qaeda-led forces in the west, insisting they were "moderate rebels" defending the country from Assad’s army which was attacking without reason. The CIA program to back those terrorists did not end until President Trump finally canceled it in the summer of 2017. Our allies the Turks continue to protect al Qaeda, now called "Hayat Tahrir al-Sham" in Syria’s northwest.

ISIS’s "territorial caliphate" has long-since been defeated. When Trump tried to declare victory and withdraw in 2018, and again in 2019, the cry went out that the U.S. cannot leave because Syria was closer to Iran than ever before since they had come to help the Syrians to fend off the al Qaeda and ISIS terrorists the U.S. had helped inflict on them.

So Trump left the troops in eastern Syria to occupy the oil and wheat fields to keep them out of the hands of the Syrian government. This is meant to accentuate the effect of the U.S.’s crippling sanctions against the country’s economy, and in a further irony, increase Syrian financial dependence on Iran to help in the economic war against that nation as well. U.S. forces in Syria are also trying to prevent Iran from shipping weapons across now-Shi’ite-controlled Iraq, through Syria and on to Hezbollah in southern Lebanon, which concerns Israel.

Trump also said that even though U.S. special operations forces remain in western Iraq, aligned with its Shi’ite government and militias fighting the remnants of ISIS there, the real mission is to "keep an eye on Iran." In other words, the aim is to try to block the highway the war party insists on calling a "land bridge" between Tehran and Beirut.

President Biden is continuing these wars for and against Iran and its friends.

And even though the Feb. 15 rocket attack, like the one which preceded Trump’ assassination of Iranian Qods Force commander Gen. Qassim Soleimani a year ago, could have just as easily been launched by ISIS in an attempt to implicate the Shi’ites and drive a wedge between their two most powerful enemies, that is why the U.S. bombed Iraqi Shi’ite militias fighting al Qaeda and ISIS in Syria.

Scott Horton is director of the Libertarian Institute, editorial director of Antiwar.com, host of Antiwar Radio on Pacifica, 90.7 FM KPFK in Los Angeles, California and podcasts the Scott Horton Show from ScottHorton.org. He’s the author of the 2021 book Enough Already: Time to End the War on Terrorism, the 2017 book, Fool’s Errand: Time to End the War in Afghanistan and editor of the 2019 book The Great Ron Paul: The Scott Horton Show Interviews 2004–2019. He’s conducted more than 5,400 interviews since 2003.