There’s no reason for you to accept the story about the Russian military paying Afghan militants to kill American troops in Afghanistan. The New York Times, Wall Street Journal and Washington Post all started this controversy late last week with incredibly thin stories. They did not even pretend to claim that it was true the Russians had put bounties on U.S. troops, only that they had anonymous sources who claimed there was a government report somewhere that said that. They were reporting the "fact" that there was a rumor.

They wouldn’t even say which agencies were leaking the story. All we were told was the story came from "intelligence officials" or even "people familiar" with the story.

They did not cite any evidence and did not claim to connect the rumored bounties to the deaths of any particular American soldiers or marines. 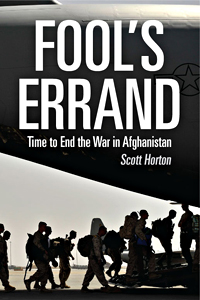 All three stories were written in language conceding they did not know if the story was true. The Times wrote this "would be an escalation," "officials have said," "it would be the first time," and again, "would also be a huge escalation." [Emphasis added.] ("Escalation" of what? Russia’s global dark arts war against American interests which also happens to only exist in the form of claims of anonymous government officials.)

The sources claim that the intelligence report says that captured "militants" — again deliberately vague — were caught with some American cash and later admitted to Afghan National Security Force interrogators that they had been paid these Russian bounties.

Well the entire country is awash in American cash as well as every form of black market in drugs, guns, prostitution and the rest. The U.S. itself has been paying the Taliban since 2005 or 2006 literally billions of dollars in protection money for convoys of U.S. supplies in the country. There’s even a whole book devoted to that subject called Funding the Enemy: How US Taxpayers Bankroll the Taliban by Douglas Wissing. They then spend that money buying American weapons, night-vision equipment and even Humvees from the Afghan Army the U.S. has built there.

Of course the Afghan government has a huge interest in perpetuating such tales as these, whether they tortured these statements out of these prisoners or not. They want desperately for U.S. forces to stay to protect their power. If making up a story about Russia and the Taliban could undermine the Trump administration’s peace talks with the Taliban, then they just might do that.

After all we’ve been through, we’re supposed to give anonymous "intelligence officials" in the New York Times the benefit of the doubt on something like this? I don’t think so.

The Wall Street Journal conceded yesterday that the National Security Agency is dissenting from the conclusion about the bounties, though of course not saying why. However, just the fact that they put that in the paper seems to signal a very strong dissent from the conclusion and the media and political war that is being waged in the name of it. The Pentagon also said on Monday it has not seen "corroborating evidence" to support the claims.

Current reports are that the supposed events all happened last year. This raises major questions why the story was leaked to the three most important newspapers in the country in the way that it was last week. The national security state has done everything they can to keep the U.S. involved in that war, successfully badgering Obama and Trump both into expanding it against their better judgement. If Trump had listened to his former Secretary of Defense James Mattis and National Security Advisor H.R. McMaster, we’d be on year three of an escalation with plans to begin talks with the Taliban next year. Instead, Trump talked to them for the last year-and-a-half and has already signed a deal to have us out by the end of next May.

The national security state also has a continuing interest in preventing Trump from "getting along with Russia." Anything they can do to advance the tired debunked old narrative that Trump puts Russian interests before America’s, they will. Of course that is the story TV is pushing again this week. (I am not a Trump supporter. But lies are lies and his position on Afghanistan is now correct.)

Before this supposed story broke last week, Sen. Angus King, the Democrat, was already complaining about Trump’s plans for a "precipitous" and "hasty" withdrawal from Afghanistan, after two decades — a withdrawal planned for completion another year from now. Shocking but not surprising, as they say.

It’s America who switched sides in the Afghan war, not Russia. They have supported the U.S. effort and U.S.-created government in Kabul since 2001. In 2012, when the Pakistanis closed the "southern route" from Karachi through the Khyber Pass, Russia re-opened the "northern route" through their country to allow American supplies into Afghanistan for Obama’s "surge." They have sent arms to the Afghan National Army. To get around their own sanctions, the U.S. has even had India buy helicopters from the Russians to give to the Afghan government.

There’s no question they are talking to the Taliban. But so are we.

There were claims in 2017 that Russia was arming and paying the Taliban, but then the generals admitted to Congress they had no evidence of either. In a humiliating debacle, also in 2017, CNN claimed a big scoop about Putin’s support for the Taliban when furnished with some photos of Taliban fighters with old Russian weapons. The military veteran journalists at Task and Purpose quickly debunked every claim in their piece.

Let’s say hypothetically that the story was true: The simplest explanation for Russia’s motive then would be that they were trying to provoke exactly the reaction they have gotten, which is renewed pressure on Trump to back out of the withdrawal deal with the Taliban since his political enemies will spin it as a "win" for Russia if we leave. But why would Russia want to provoke America to stay in Afghanistan? Could it be for the same reason that Jimmy Carter and Ronald Reagan backed the mujahideen against the USSR back in the 70s and 80s — to provoke them into committing national suicide by bogging them down in a no-win quagmire, killing hundreds of thousands of people and wasting uncountable billions of dollars?

So what would that say about our policy now?

Of course that’s all nonsense too. The reason the Russians have supported our efforts in Afghanistan for the last 19 years is because we’re protecting their friends in power and at least supposedly have been fighting to keep transnational Islamist terrorism at bay. If they are backing the Taliban at all now it would be just a small version of their own "Awakening" policy of supporting the local mujahideen against the new smaller and more radical groups claiming loyalty to ISIS there, since the Taliban have been their most effective opponents.

This is not much different than the current American policy which prioritizes the Taliban’s keeping ISIS and al Qaeda down and out for us.

Of course it’s America’s (dis)loyal Saudi and Pakistani allies who have been backing the Afghan Taliban insurgency against the U.S. occupation all these years, not the Russians.

Afghanistan will probably be mired in protracted conflict for years after U.S. forces finally leave, though hopefully all sides are tired enough of fighting now that they can negotiate acceptable power-sharing arrangements instead. If the pressure is bad enough that Trump renounces his own deal, the Taliban will almost certainly go back to war against U.S. forces there. That is not likely to happen though.

As far as America’s relationship with Russia — the single most important thing in the world for all people — this is just another setback on the road to a peaceful and acceptable coexistence.