What a tangled web these war-loving fools spin. We are referring, of course, to Washington’s belated attempts to ease or remove sanctions against oil producers Venezuela and Iran. That’s so it can crank up the sanctions against the new villain of the month, Russia, without monkey-hammering American consumers with $7 gasoline prices.

Then again, why is Washington in the Spanker-in-Chief business in the first place?

Yes, the Venezuelan people foolishly elected a socialist government which proceeded (predictably) to wreck their economy. But why did Uncle Sam have to administer a spanking, especially since the strapping occurred during a Republican Administration that should know better than to indulge in the folly of nation-building? Yet that’s the whole purpose of sanctions – to force recalcitrant nations to reshape themselves according to Washington’s dictates.

Then again, who ever said the Donald was a Republican or rational for that matter? The sanctions on Venezuela that Sleepy Joe is fixing to lift where actually slapped on by the Donald in a bid to consolidate the Cuban/Latin emigre vote in Florida.

Still, couldn’t Washington have let well enough alone and wished the people of Venezuela better luck next time rather than viciously hobble what remained of their energy industry?

Likewise, it was also the Donald who withdrew from the nuke deal, not Tehran, and you know what vote was in the cross-hairs in that instance.

Moreover, the fact that Iran chooses to conduct a regional policy based on confessional ties with the Shiite communities of Syria (Assad/Alawites), Yemen (Houthis) and Lebanon (Hezbollah/Shiite) matters not one whit to the safety and security of the U. S. homeland. It’s just another case of spanking an alleged miscreant for activities which are none of Washington’s business.

So lets get the bigger picture straight. Washington is the self-proclaimed war capital of the world. It is now red in tooth and claw with war sanctions fever, capped off today by Biden’s foolish embargoing of Russian energy imports.

As we explain below, in any kind of reasonable time frame this embargo will not harm Russia at all, but in the near-term it will surely send pump prices in the US soaring still higher. According to GasBuddy, the national gas price average has risen 49.1 cents per gallon in the last 7 days alone. That’s the largest 7-day rise in history and the average pump prices now stands at a record $4.19 per gallon nationally.

In the longer run, of course, global commodities are completely fungible once suppliers and vendors make adjustments for logistics, product grades and mixes and other short-term technical obstacles, for which there are always market-driven workarounds.

Thus, prior to the invasion, Russia was exporting about 6 million barrels per day of seaborne crude oil (i.e. by tanker). About 4.0 million barrels went to the US and Europe, 1.5 million bbls to China and the balance to various parts of Asia and Africa.

So assume that Europe gets aboard the embargo 100%, which is highly unlikely but illustrates the point. Once the global marketplace finishes working its fungibility magic, however, it is perfectly conceivable that China and other Asian destinations would take up the entire 4.0 million barrels now going to USA/Europe, while the latter back-fills its needs from Middle East sources now supplying China.

Nor should anyone take our word for it. That longer run supply/demand reallocation comes straight from the horses mouth – Goldman Sachs itself:

First, from a crude import quality perspective, Russia’s crude is well suited to displace up to 3mb/d of similar quality medium sour crude imports from outside of Russia.

Second, Chinese imports can increase from their recent 10 Mb/d level, with a peak import capacity above 12.7 Mb/d, and with the country able to replenish its depleted inventories, down at least 100 Mb since their Nov-20 peak. This would admittedly not be a smooth process, as a full redirection of oil flows to the East would still tighten global markets, as it would require a 12-day increase in transit time, equivalent to the loss of 90 million barrels (nearly double Iran’s current floating storage).

The potential key bottleneck that could arise in such a redirection is the availability of additional ships necessary to operate on this longer route, alongside a similarly inefficient reallocation of displaced Chinese import flows. This pull on the global fleet could be exacerbated by the potential for additional sanctions on Russian-flagged vessels as well as due to draft restrictions on Russian Black Sea ports.

In particular, none of Russia’s exports flow via VLCCs or ULCCs, typically using LR2s(c.500kb-1mb) for its crude, and predominantly MR vessels (c.150kb-300kb) for its products. On our calculations, however, Russia’s trade requires less than 10% of the global LR and MR fleet, with China’s LR and MR fleet alone twice the size of that needed to sustain the entirety of Russia’s oil flows.

Overall, global shipping capacity should not be a limiting factor for reallocating Russian oil flows, although it may come at the expense of elevated freight rates and fast-steaming of tankers to increase effective capacity.

There you have it: Elevated freight rates and more steaming days on the blue water!

That is to say, supply and demand will eventually be re-balanced at premium costs because that’s what sanctions actually do – force reallocations outward and costs upwards. So Russia will get its “blood money” from China (at a discount to world prices) rather than from the refiners in the Gulf Coast, which have been beaten to a guilty pulp by geniuses like Senator Ted Cruz, one of the most bloody-thirsty of the GOP neocons.

Nor is that the half of it. The sheer waste created during the displacement process will simply detract from global GDP and prosperity, with the shortfall distributed willy-nilly among impacted parties.

For example, in addition to it 6.0 million barrels per day of seaborne exports, Russian also sends upwards of 800,000 barrels a day of its flagship Urals crude to Europe through the Druzhba pipeline. The latter is a Soviet-era conduit which carries crude to refiners in Germany – Europe’s biggest economy – as well as to Poland, Slovakia, Hungary and the Czech Republic.

If Russian crude were to be completely embargoed as the war-heat driven politicians in Washington and Brussels are demanding, the low-cost Druzhba pipeline flows would cease, only to be replaced with higher cost seaborne imports from the middle east and Africa. Talk about shooting yourself in the kneecap!

Still, sooner or later the global market would find its workarounds. As per the Wall Street Journal, for example,

Central European refiners on the southern leg of the Druzhba pipeline, such as those run by Hungary’s Mol Group, could import oil from the Adria pipeline. That pipe starts on the Croatian coast and has been renovated in recent years to bolster the region’s energy security. Urals is moderately heavy and sulfurous, meaning it can be replaced by crudes such as Arab Medium, produced in Saudi Arabia, and most crudes produced in Iraq.

Needless to say, the dislocations and premium-cost workarounds in the crude oil trade are merely a microcosm of the entire array of traded commodities and products. The same process would eventually happen with wheat, nickel, palladium, corn, natural gas, etc.

For instance, wheat prices have skyrocketed more than 60% in the past two weeks as the war effectively shut off more than 30% of the world’s wheat supply, which ordinarily trades out of the Black Sea ports for Ukraine and Russian producers.

The commodity, in turn, is used in everything from bread to cookies and noodles. Accordingly, those soaring upstream costs will rapidly work their way down the processing pipeline until they arrive on the grocery shelves, say in June. That is, just in time for American consumers to be paying $6 per gallon to drive to Kroger’s to pick up an inflated load of bread.

At the end of the day, of course, the only negative is that Russia gets its commodity sales and the rest of the world pays the premiums for sub-optimizing the supply chains. 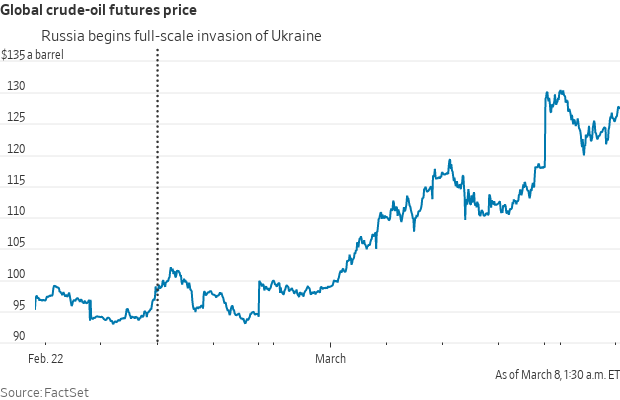 But that ain’t the half of it, unfortunately. What is happening in both Washington and the European capitals is the Green New Deal crowd is using this very self-inflicted economic crunch to demand massively increased subsidies for wind, solar and other so-called renewables.

Indeed, Europe appears to be intend upon committing economic hari kari. Reports indicate that the EU’s executive arm is mapping out a path to end the bloc’s reliance on Russian gas, which could see import needs cut by almost 80%. That is, effectively replace the staggering sum of 155 billion cubic meters of gas it currently imports from Russia, with 125 billion cubic meters of renewables, conservation and high priced LNG imports.

As to how this economic gravity defying miracle is to happen, the Wall Street Journal has the scoop:

The commission is set to say that accelerating the Green Deal, the bloc’s sweeping strategy aimed at reaching climate neutrality by 2050, will reduce greenhouse gas emissions, cut reliance on imported fossil fuels and shield the economy from price hikes, according to the official, who asked not to be identified, as discussions on the strategy are private. The proposals may still change before they are adopted.

As part of the clean shift, the EU is currently discussing a set of laws to meet a stricter 2030 goal of cutting greenhouse gases by at least 55% from 1990 levels. Full implementation of the “Fit for 55” rules would cut EU gas consumption this decade by 23%, or an equivalent of 82 billion cubic meters.

Tuesday’s plans will add on higher LNG imports and pipeline supplies from outside Russia, more renewable gases, energy savings and a shift to electrification.

The summary for the last sentence captures the whole misbegotten strategy: Namely, replace lower costs with higher costs – sometimes drastically higher costs – whenever and wherever possible.

In that sense, the West’s grand Sanctions War and the Green New Deal are two peas from the same pod. They are the work of politicians over-riding the natural and hard-won efficiencies of the marketplace in the name of a bogus objective.

And we do mean bogus. The phony Climate Change Hoax speaks for itself – the earth’s average temperature today and CO2 concentrations are at among the lowest levels, respectively, in the last 600 million years.

Likewise, Russia’s latest demands at the so-called negotiation sessions in Belarus tell you exactly what the war is such a Washington-prolonged crock.

….the Kremlin issued updated demands saying it would halt all military operations if Ukraine agreed to the following: recognize Russian sovereignty over Crimea, acknowledged the statehood of Donetsk and Luhansk, and importantly to update the Ukrainian constitution barring entry into external military alliances (namely NATO).

That amounts to partition of a country in the midst of an ethnic-based civil war, and one that didn’t even exist until that great builder of democracy and Christian charity, Vladimir Lenin, declared it one in 1922.

So the bloody sanctions warriors of Washington might well be asked, what’s wrong with partition, when it would end the war tomorrow?

The answer, of course, is they devoutly do not wish to end the war tomorrow. Washington is in the Spanker-in-Chief business and it relishes cracking the strap.

As we said, brace for impact. Your rear-end is next in line!