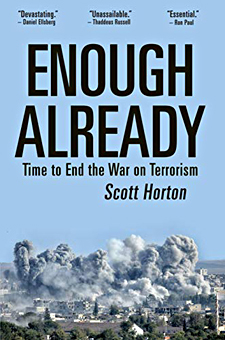 The following is the Introduction to Antiwar.com editorial director Scott Horton’s new book, Enough Already: Time to End the War on Terrorism.

The Middle East, North Africa and South-Central Asia are in chaos. Populations have been riven by sectarian civil war in what remains of the former states of Iraq, Syria, Libya and Mali, across to Afghanistan and down into the Arabian Peninsula. More than a million people have been killed. Tens of millions more have been displaced, resulting in the massive refugee crisis that afflicted Europe in the last decade.

This is because the U.S. government has spent the last 20 years waging wars and interventions across these regions against an endlessly shifting series of enemies. They claim to be doing all this to defend the American people against international terrorist groups. In truth, the entire War on Terrorism has been at the expense of the actual security of the United States and the people of the Middle East and Africa. Membership in bin Ladenite terrorist groups is near its all-time high.

The reality is that the US government got us into this mess in the first place and that virtually everything they have done in response to anti-American terrorism has only helped the terrorists grow in strength.

This is by design: the enemy’s. As Osama bin Laden explained for years before the attacks of September 11, 2001, he was attempting to lure Americans into personally fighting the wars al Qaeda members believed the US was already waging against them. They blamed America for the actions of its various proxy forces in the region, primarily the dictatorships in Saudi Arabia and Egypt as well as the Israeli occupation in Palestine.

By providing the American government a crisis to exploit, bin Laden guaranteed that the United States would set about accomplishing the terrorists’ goals for them. Among these were the destabilization of U.S.-supported regimes in the region, religious and political radicalization of populations of Middle Eastern countries, and most importantly, the bankruptcy of the American treasury with the ultimate goal of forcing the US from the region entirely.

Their plan was to provoke a US invasion of Afghanistan so they could attempt to replicate their 1980s war of attrition against the Soviet Union’s military occupation of that nation. By most accounts, that effort, supported by the United States and their Saudi and Pakistani allies, did contribute to the final collapse of the USSR in the years 1988–1991.

Al Qaeda’s mission was accomplished when America attacked Afghanistan in 2001. But, if the US invasion of Iraq in 2003 was the "hoped for, but unexpected gift to bin Laden," in the words of the former chief of the Central Intelligence Agency’s al Qaeda unit, the rest of American policy since then must seem like they hit the lottery. The regimes in Egypt and Saudi Arabia still stand, but America’s wars in Iraq, Somalia, Yemen, Libya, and especially the covert war against the Syrian government from 2011–2017 have helped spread bin Ladenite political and religious radicalism and violent conflict throughout the region and into northern and western Africa. Membership in groups declaring loyalty to al Qaeda or its Iraqi splinter group ISIS are now in the tens of thousands.

A long-term proxy war between Saudi Arabia, Iran and their respective Sunni and Shi’ite allies was worsened considerably by the US invasion of Iraq in 2003, which redrew territorial lines of authority through bloody conflict and guaranteed further violence for decades to come. Over time, America has fought for and against all sides of this conflict, sometimes at the same time.

Both radical Sunni al Qaeda, the American people’s enemy, and Shi’ite-led Iran, the American government’s major strategic rival for dominance over the Middle East, have only continued to make gains these last two decades, at the expense of entire Middle Eastern civilian populations. As many as two million fighters and civilians have been killed, wounded and widowed – and tens of thousands of American soldiers, sailors, airmen, marines, guardsmen and contractors with them.

Congress has passed thousands of new laws, established entire new federal bureaucracies and granted spy agencies such as the CIA, NSA and FBI vast new powers to collect information on all American citizens without constitutional warrants. In the era of the War on Terrorism, federal government lawlessness has made a mockery of the American values of freedom and justice that our politicians have cynically invoked to justify their destructive policies.

The government has spent trillions of dollars. Politically connected interests have made massive fortunes, but American society at large has gained nothing beyond, perhaps, increasingly necessary technological advancements in the manufacture of prosthetic limbs.

The generals and hawks say we can never withdraw from any Muslim country where US forces are stationed because those spaces will then become "safe havens" from which terrorists will be able to stage attacks on American civilians. But it has been unwarranted American intervention in other people’s countries that has motivated terrorist attacks against us all along. Meanwhile, American strategy and tactics against al Qaeda-loyal forces have only been counterproductive, increasing the power and influence of the targeted groups. When the US has outright sided with the enemy in Libya, Syria and Yemen, the results have been catastrophic.

In a perverse imitation of our enemies, the policy of American dominance in the Middle East amounts to murder-suicide on a mass scale. The treasury is empty, the infantry is exhausted, the Bill of Rights is in tatters and the American people do not believe in the war anymore.

Polls show that strong majorities of even the troops who have fought in Iraq and Afghanistan say these wars should never have happened in the first place.

It is time to end the War on Terrorism.

It is time to just come home.

Scott Horton is director of the Libertarian Institute, editorial director of Antiwar.com, host of Antiwar Radio on Pacifica, 90.7 FM KPFK in Los Angeles, California and podcasts the Scott Horton Show from ScottHorton.org. He’s the author of the 2021 book Enough Already: Time to End the War on Terrorism, the 2017 book, Fool’s Errand: Time to End the War in Afghanistan and editor of the 2019 book The Great Ron Paul: The Scott Horton Show Interviews 2004–2019. He’s conducted more than 5,400 interviews since 2003.