Lavrov told Russian state news agency RIA Novosti things had "substantially changed" since the Russian-Ukrainian peace talks in Istanbul failed four months ago. Then, the focus was on Donetsk and Luhansk in the Donbass. Lavrov:

"Now the geography is different, it’s far from being only the Donetsk and Luhansk People’s Republics, it’s also Kherson and Zaporizhia oblasts and a number of other territories. And this process continues consistently and persistently."

Lavrov added that to the extent that the West, in impotent rage or in a desire to aggravate the situation as much as possible, pumps Ukraine with more and more long-range weapons, for example, HIMARS, the geographic tasks of the special operation will move even farther forward from the current line. "Because we cannot allow the part of Ukraine that Zelensky will control, or whoever replaces him, to have weapons that will pose a direct threat to our territory and the territories of those republics who have declared their independence, those who want to determine their future on their own." 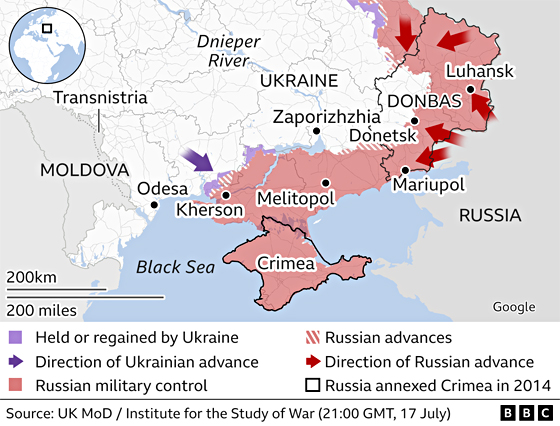 Also today, U.S. Defense Secretary Lloyd Austin announced the US will provide Ukraine with four more Lockheed-Martin-built M142 High Mobility Artillery Rocket Systems (HIMARS), bringing the total to 16. The range of the systems provided reportedly are 80 kilometers (50 miles). He noted that Ukrainian troops have been able to use the systems "effectively" and that they have already "made a difference on the battlefield.”

Austin also said the US will also soon be providing Ukraine with more munitions for the HIMARS, as well as “precision-guided artillery ammunition, tactical vehicles and other urgently needed support.” He added, “We’ll continue to provide historic levels of security assistance to help Ukraine defend itself."

But Who Are the Targeteers?

In a highly unusual article titled "Staged Incidents as the Western Approach to Doing Politics," Russian Foreign Minister Sergey Lavrov has issued a forewarned-is-forearmed kind of warning on what surprises one might expect in Ukraine as Russian troops move forward. Embedded in his lengthy litany of past false-flag-type attacks, which he blames on the West and the "Anglo-Saxons," is the following implicit warning:

"NATO instructors and Multiple Launch Rocket Systems aimers are, apparently, already directing the actions of the Ukrainian Armed Forces and nationalist battalions on the ground."

True or not (and most military specialists doubt the Ukrainians could have been able to master such systems in such a short time), the HIMARS issue moves NATO and Russia closer to direct confrontation.

To saner minds, this particular juncture also offers an opportunity for the give and take that could occur in serious negotiations. Surely enough blood has been spilled already.