Putin’s op-ed in the Times appeared under the title: “A Plea for Caution From Russia.” In it, he warned that a military “strike by the United States against Syria will result in more innocent victims and escalation, potentially spreading the conflict far beyond Syria’s borders … and unleash a new wave of terrorism. … It could throw the entire system of international law and order out of balance.”

Three weeks before Putin’s piece, on August 21, there had been a chemical attack in the Damascus suburb of Ghouta and Syrian President Bashar al-Assad was immediately blamed. There soon emerged, however, ample evidence that the incident was a provocation to bring direct U.S. military involvement against Assad, lest Syrian government forces retain their momentum and defeat the jihadist rebels.

Despite his concern of a US Attack, Putin’s main message in his Op-Ed was positive, talking of a growing mutual trust:

“A new opportunity to avoid military action has emerged in the past few days. The United States, Russia and all members of the international community must take advantage of the Syrian government’s willingness to place its chemical arsenal under international control for subsequent destruction. Judging by the statements of President Obama, the United States sees this as an alternative to military action. [Syria’s chemical weapons were in fact destroyed under UN supervision the following year.]

“I welcome the president’s interest in continuing the dialogue with Russia on Syria. We must work together to keep this hope alive … and steer the discussion back toward negotiations. If we can avoid force against Syria, this will improve the atmosphere in international affairs and strengthen mutual trust … and open the door to cooperation on other critical issues.”

In a lengthy interview with journalist Jeffrey Goldberg published in The Atlantic much later, in March 2016, Obama showed considerable pride in having refused to act according to what he called the “Washington playbook.”

He added a telling vignette that escaped appropriate attention in Establishment media. Obama confided to Goldberg that, during the crucial last week of August 2013, National Intelligence Director James Clapper paid the President an unannounced visit to caution him that the allegation that Assad was responsible for the chemical attack in Ghouta was “not a slam dunk.”

Clapper’s reference was to the very words used by former CIA Director George Tenet when he characterized, falsely, the nature of the evidence on WMD in Iraq while briefing President George W. Bush and Vice President Dick Cheney in December 2002. Additional evidence that Ghouta was a false flag came in December of 2016 parliamentary testimony in Turkey.

In early September 2013, around the time of Putin’s Op-ed, Obama resisted the pressure of virtually all his advisers to launch cruise missiles on Syria and accepted the Russian-brokered deal for Syria give up its chemical weapons. Obama had to endure public outrage from those lusting for the US to get involved militarily. From neoconservatives, in particular, there was hell to pay.

Atop the CNN building in Washington, DC, on the evening of September 9, two days before Putin’s piece, I had a fortuitous up-close-and-personal opportunity to watch the bitterness and disdain with which Paul Wolfowitz and Joe Lieberman heaped abuse on Obama for being too cowardly to attack.

In his appeal for cooperation with the US, Putin had written these words reportedly by himself:

“My working and personal relationship with President Obama is marked by growing trust. I appreciate this. I carefully studied his address to the nation on Tuesday. And I would rather disagree with a case he made on American exceptionalism, stating that the United States’ policy is ‘what makes America different. It’s what makes us exceptional.’ It is extremely dangerous to encourage people to see themselves as exceptional, whatever the motivation. There are big countries and small countries, rich and poor, those with long democratic traditions and those still finding their way to democracy. Their policies differ, too. We are all different, but when we ask for the Lord’s blessings, we must not forget that God created us equal.”

In recent days, President Donald Trump’s national security adviser, John Bolton, has left no doubt that he is the mascot of American exceptionalism. Its corollary is Washington’s “right” to send its forces, uninvited, into countries like Syria.

As was the case in September 2013, Syrian government forces, with Russian support, have the rebels on the defensive, this time in Idlib province where most of the remaining jihadists have been driven. On Sunday began what could be the final showdown of the five-year war. Bolton’s warning of a chemical attack by Assad makes little sense as Damascus is clearly winning and the last thing Assad would do is invite US retaliation.

US Ambassador to the UN, Nikki Haley, with remarkable prescience has already blamed Damascus for whatever chemical attack might take place. The warnings of direct US military involvement, greater than Trump’s two previous pin-prick attacks, is an invitation for the cornered jihadists to launch another false-flag attack to exactly bring that about.

Sadly, not only has the growing trust recorded by Putin five years ago evaporated, but the likelihood of a U.S.-Russian military clash in the region is as perilously high as ever.

Seven days before Putin’s piece appeared, Donald Trump tweeted: “Many Syrian ‘rebels’ are radical Jihadis. Not our friends & supporting them doesn’t serve our national interest. Stay out of Syria!” 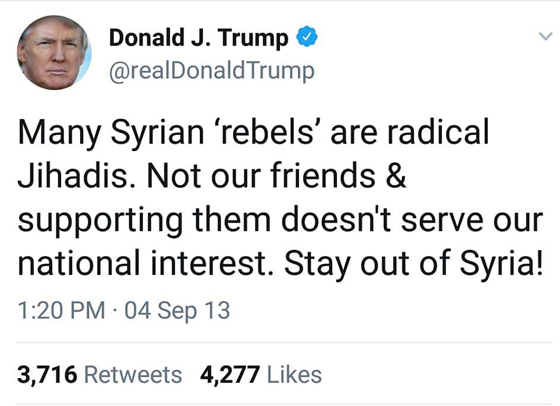 In September 2015 Trump accused his Republican primary opponents of wanting to “start World War III over Syria. Give me a break. You know, Russia wants to get ISIS, right? We want to get ISIS. Russia is in Syria – maybe we should let them do it? Let them do it.”

Last week Trump warned Russian and Syria not to attack Idlib. Trump faces perhaps his biggest test as president: whether he can resist his neocon advisers and not massively attack Syria, as Obama chose not to, or risk the wider war he accused his Republican opponents of fomenting.

Ray McGovern works with Tell the Word, a publishing arm of the ecumenical Church of the Saviour in inner-city Washington. His 27-year career as a CIA analyst includes serving as Chief of the Soviet Foreign Policy Branch and preparer/briefer of the President’s Daily Brief. He is co-founder of Veteran Intelligence Professionals for Sanity (VIPS). William Binney worked for NSA for 36 years, retiring in 2001 as the technical director of world military and geopolitical analysis and reporting; he created many of the collection systems still used by NSA. Reprinted with permission from Consortium News.