Republicans are a pretty pathetic lot. They are always yapping about the socialist dangers posed by the Dem spenders, but actually wouldn’t recognize actual socialism if it whacked them across the forehead.

That is to say, in recent days they have been hooping and hollering in favor of Washington’s Sanctions War on Russia, but that’s about as pure a case of socialism as can be imagined. In essence, economic sanctions assume that the state is entitled to expropriate and destroy economic value owned by any business which had been doing good faith trading or financial transactions with sanctioned Russian entities.

Sure the big cap Fortune 500 and Silicon Valley giants can virtue signal about closing operations in Russia owing to the sanctions or just purported patriotic duty. But that’s phony because most of these corporate giants are vastly overvalued on the stock market owing to the Fed’s reckless money-printing, and therefore believe they can take a multi-billion value hit with impunity.

Needless to say, the C-suites that rationalize this government ordered or induced theft of property are in for a considerable surprise not too far down the road when the stock market finally collapses. That is, economic value destruction and asset-impairment is just that whether it is immediately reflected in stock market capitalizations or not.

More importantly, the entire medium and small business sector apart from the corporate giants is taking it squarely on the chin. In effect, exporters of sanctioned materials and products to Russia are economic draftees without compensation.

That much is strikingly evident in a WSJ piece praising the national security bureaucrats who planned the Sanctions War. These geniuses concluded that avionics and aircraft parts would be a ripe sector for an export embargo owing to Russia’s heavy dependence on western aircraft and their parts suppliers:

What emerged was a wide-ranging list of targets, including aviation and avionics. At least 80% of Russia’s commercial aircraft fleet is made by Boeing Co. or Airbus SE. State carrier Aeroflot has ambitious expansion plans, and even Russian-made planes use Western equipment. Imposing export controls on Russia’s aviation could eventually ground most of its planes.

Ground them indeed, but that also amounts to grounding US suppliers and exporters who were making an honest living selling these parts to Aeroflot and other Russian buyers. And those acts of peaceful commerce also likely included investment in the form of equipment, tools and working inventories needed to manufacture or fill Russian parts orders – investments that are now stranded and likely to lead to losses.

This is only a tiny example, of course, but multiply it by all the acts of commerce impacted by thousands of new pages of US Treasury regulations and you are talking about tens of billions of property impairments. Yet judging by the WSJ article these unconstitutional “takings” did not get a moments consideration by the careerist national security apparatchiks who launched this sanctions monstrosity.

Nor are they done. Apparently Sleepy Joe was scripted for his AM call with Xi Jinping to warn the Chinese dictator that if China dared engage in acts of commerce inconsistent with Washington’s sanctions writ that his country would be next in line for this form of economic warfare.

Previewing the conversation, US Secretary of State Antony Blinken emphasized Biden will “make clear that China will bear responsibility for any actions it takes to support Russia’s aggression, and we will not hesitate to impose costs” in a Thursday news conference. Blinken has charged that China is “considering directly assisting Russia with military equipment.”

Blinken said further “it appears that China is moving in the opposite direction by refusing to condemn this aggression, while seeking to portray itself as a neutral arbiter.” An example of this kind of mixed signaling is that China has so far withheld calling what kicked off on Feb. 24 an “invasion” but has used the words “issue” or “crisis”.

So we will say it again. Where does this little dipshit get the authority to impair billions of private investments and economic value so that he and his Washington comrades can get high administering a spanking to Vladimir Putin?

Folks, that’s what this whole Sanctions War amounts to – a unilateral act of sanctimonious punishment for Russian actions which in no way bear on the safety and security of the American homeland. For crying out loud, the economic might of NATO is 29X that of Russia and thereby tells you all you need to know about the “Russian threat”:

So whatever Putin is he is not an incipient Hitler bent on conquest. The very idea is absurd. Even if Putin had a screw loose, which Cool Hand Vlad most definitely does not, the notion that Russia has designs on the Baltics or Poland, to say nothing of western Europe, the UK and North America, is just plain poppycock.

Indeed, as we demonstrated earlier this week this isn’t even a case of one long-standing neighbor invading the other, thereby warranting a global policeman act by Washington.

To the contrary, Russia and Ukraine have been joined at the hips for centuries and are now engaged in what amounts to a civil war brought on by Washington’s 2014 coup in Kiev. Its subsequent arming to the teeth of the anti-Russian populations and factions who took control of the central government and who have long-shared the territory known as Ukraine with Russia, in fact, is the approximate cause of the current devastating war.

So there is really no cause for Washington’s intervention in this unfortunate intramural conflict, and to use it as an excuse to attack honest American businesses, which, in fact, were minding their own business. The latter are just plain victims of statist aggression by a puffed up Imperial City nomenklatura that revels in its self-appointed role as global Spanker-in-Chief.

Needless to say, this anti-constitutional binge gives sanctimony a wholly new definition. As one one insightful market commentator underscored, the stakes in Washington’s emerging secondary sanctions attack on China are exceedingly high:

“I cannot help myself but to editorialize here and say this is a profound diplomatic misstep, one that pushes China into the arms of Russia – creating an alliance between two Asian nations that are perfectly fit for one another – with Russia providing natural resources and materials and China manpower and technology. The hubris of American diplomacy to demand China to heel before US policy in Ukraine could end up being a total disaster.”

He got that right. Besides, the idea that the US has global support for its Sanctions War is just plain establishment propaganda. In fact, the world is overwhelmingly not behind Washington’s self-appointed role as Spanker-in-Chief.

When you line up the nations which voted no or abstained on the UN resolution condemning Russia – including China, India, Pakistan, Brazil, South Africa and Iraq – they represent 4.14 billion of the world’s 7.41 billion population outside of the USA. That’s 56% of the planet not joining Washington in its rabid warmongering against Russia. 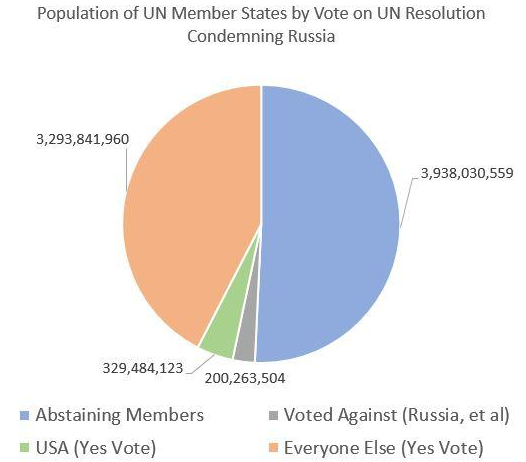 Still, the delusional apparatchiks of the Deep State are pleased to pretend they are involved in a noble cause that justifies expropriating the wealth of honest American businesses:

The hell we are! What we are really doing is stealing private wealth, and not just from the Russians but from every honest counter-party based in the US and Europe who transacted with Russian entities in trade or finance. That’s what the weaponization of the dollar amounts to – state initiated theft on a grand scale.

Needless to say, the Washington nomenklatura doesn’t get either the profound principles involved or the implications of its global Sanctions War.

Meanwhile they are clueless about the disaster they are bringing to the domestic economy. That was underscored as plainly as can be by Nancy Pelosi’s recent claim that inflation is caused by the “Putin tax” and that,

There you have it. Sheer economic idiocy that is actually shared by the bipartisan duopoly. Washington is destroying American prosperity and these fools think they are doing god’s work

Indeed, the national security apparatus actually crossed the Rubicon when it decreed that the reserves of Russia’s central bank were fair game for confiscation. As the WSJ explained,

US officials worried other central banks might come to doubt the US was a reliable place to hold reserves if they froze the reserves. That could undermine the dollar’s status as the financial system’s bedrock currency.

You don’t say! Still that did not stop them from plunging over the brink when it became apparent that Russia would move to safeguard the nearly 50% of its $650 billion of reserves deposited abroad:

They had just a few hours to deliberate on whether to counter. On Saturday Feb. 26, the allies agreed to block any move of Russian reserves before trading resumed on Monday. By 3:30 a.m. Brussels time on Feb. 28, the text of a blocking order was agreed and announced soon after, alongside plans to cut some of Russia’s biggest banks off from the Swift global financial messaging system, a move officials had been reluctant to take before the invasion but which they signed onto after.

There you have it. Outright theft of the wealth of the world’s other major nuclear power – even as Washington doubled down against its own citizens and took a fateful step toward wrecking the dollarized international payments system on which America’s tenuous prosperity hangs.

As we said, with bipartisan governance like that, who needs to worry about socialism. We already have it.