This is getting downright pathetic. If you want the smoking gun proof that ol’ Vlad Putin actually didn’t brandish over these past few weeks of Washington bellicosity about the sanctity of Ukraine’s borders, well, here it tis: Sleepy Joe’s plummeting approval ratings: 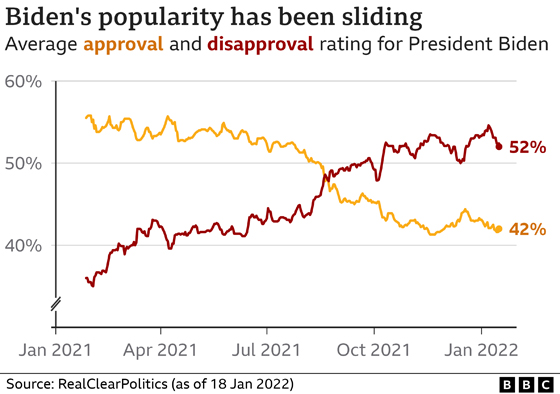 That’s right. It has nothing to do with the annexation of Crimea, Russian greenmen marauding the Ukraine’s eastern Russian-speaking populations in the Donbas or certainly not an imminent Russian invasion of Ukraine proper and its anti-Russian capital of Kiev.

No, it’s from the script right out of the 1997 Hollywood movie about Bill Clinton’s blue dress problem. At least back then Hollywood hadn’t totally buried its collective head in that part of the liberal anatomy where the sun don’t shine:

Wag the Dog is a 1997 American political satire black comedy film produced and directed by Barry Levinson and starring Dustin Hoffman and Robert De Niro. The film centers on a spin doctor and a Hollywood producer who fabricate a war in Albania to distract voters from a presidential sex scandal.

Of course, Sleepy Joe’s problem being veritable wobbles in the upstairs, not too many stiffies in the downstairs, departments.

Still, the latest caterwauling from the desperate Biden White House – on top of the idiotic British intelligence “leaks” over the weekend about a nonexistent Russian invasion plan – was even too much for its ostensible Ukrainian allies. They latter have been far more cautious in their assessment of the situation on the ground, with current and former Ukrainian national security and defense officials saying they don’t recognize Russia’s latest military buildup as anything out of the ordinary.

Ukrainian President Volodymyr Zelensky “does not think there’s any remotely imminent threat to Kyiv” at the moment, a source close to the president told BuzzFeed News on Monday, reacting to the partial US withdrawal.

“The fact that the US was the first one to announce this” – this being the voluntary departures and mandatory withdrawals – “is extremely disappointing and quite frankly these Americans are safer in Kyiv than they are in Los Angeles … or any other crime-ridden city in the US,” said the source.

Well, they got that right.

They also hit the larger issue of Washington’s hideous hypocrisy on interventions squarely on the head. Even a recent Washington Post in-depth research on US foreign interventions since WWII by Lindsey A. O’Rourke, who is an assistant professor of international politics at Boston College, couldn’t deny the screaming hypocrisy of Secy Blinkey’s non-stop talk show appearances this weekend.

It’s all in the name of protecting the liberal order against unwanted border changes or threats to sovereignty, Blinkey neighed again and again.
Really?

Between 1947 and 1989, the United States tried to change other nations’ governments 72 times; That’s a remarkable number. It includes 66 covert operations and six overt ones.

Most covert efforts to replace another country’s government failed.

During the Cold War, for instance, 26 of the United States’ covert operations successfully brought a U.S.-backed government to power; the remaining 40 failed.

I found 16 cases in which Washington sought to influence foreign elections by covertly funding, advising and spreading propaganda for its preferred candidates, often doing so beyond a single election cycle. Of these, the U.S.-backed parties won their elections 75 percent of the time.

My research found that after a nation’s government was toppled, it was less democratic and more likely to suffer civil war, domestic instability and mass killing. At the very least, citizens lost faith in their governments.

In the next article, we will go back to the beginning in 1917, but for now suffice it to note that demanding Russia give up its historic claim to the Russified province of Crimea as an excuse for Washington’s belligerence and threat of economic and even militarized war is just plain idiotic.

Indeed, Washington’s hypocritical and tendentious accusations against Russia’s re-absorption of Crimea imply that the dead hand of the Soviet presidium must be defended at all costs – as if the security of North Dakota depended upon it!

The allegedly “occupied” territory of Crimea, in fact, was actually purchased from the Ottomans by Catherine the Great in 1783, thereby satisfying the longstanding quest of the Russian czars for a warm-water port. Over the ages, Sevastopol then emerged as a great naval base at the strategic tip of the Crimean peninsula, where it became home to the mighty Black Sea Fleet of the czars and then the Soviet Commissars, alike.

For the next 171 years Crimea was an integral part of Russia (until 1954). That span equals the 170 years that have elapsed since California was annexed by a similar thrust of “Manifest Destiny” on this continent, thereby providing, incidentally, the United States Navy with its own warm-water port in San Diego.

While no foreign forces subsequently invaded the California coasts, it was most definitely not Ukrainian rifles, artillery and blood that famously annihilated The Charge of the Light Brigade at the Crimean city of Balaclava in 1854; they were Russians defending the homeland from invading Turks, French and Brits.

At the end of the day, security of its historical port in Crimea is Russia’s Red Line, not Washington’s.

Unlike today’s feather-headed Washington pols, even the enfeebled Franklin Roosevelt at least knew that he was in Soviet Russia when he made port in the Crimean city of Yalta in February 1945.

Maneuvering to cement his control of the Kremlin in the intrigue-ridden struggle for succession after Stalin’s death a few years later, Nikita Khrushchev allegedly spent 15 minutes reviewing his “gift” of Crimea to his subalterns in Kiev.

As it happened, therefore, Crimea became part of the Ukraine only by writ of the former Soviet Union:

On April 26, 1954 The decree of the Presidium of the USSR Supreme Soviet transferring the Crimea Oblast from the Russian SFSR to the Ukrainian SSR. Taking into account the integral character of the economy, the territorial proximity and the close economic and cultural ties between the Crimea Province and the Ukrainian SSR…. (emphasis ours)

In fact, the Kiev government’s current Washington-supported brouhaha about “returning” Crimea is a naked case of the hegemonic arrogance that has overtaken Imperial Washington since the 1991 Soviet demise.

After all, during the long decades of the Cold War, the West did nothing to liberate the “captive nation” of Ukraine – with or without the Crimean appendage bestowed upon it in 1954. Nor did it draw any red lines in the mid-1990s when a financially desperate Ukraine rented back Sevastopol and the strategic redoubts of the Crimea to an equally pauperized Russia.

In short, in the era before we got our Pacific port in 1848 and even during the 170-year interval since then, America’s national security has depended not one whit on the status of Russian-speaking Crimea and the Donbas region of eastern Ukraine. The fact that the local population of the former in March 2014 chose fealty to the Grand Thief in Moscow over the ruffians and rabble that have seized Kiev amounts to a giant, “So what?”

Still, it was this final aggressive drive of Washington and NATO into the internal affairs of Russia’s historical neighbor and vassal, Ukraine, that largely accounts for the demonization of Putin. Likewise, it is virtually the entire source of the false claim that Russia has aggressive, expansionist designs on the former Warsaw Pact states in the Baltics, Poland, and beyond.

The latter is a nonsensical fabrication. In fact, it was the neocon meddlers from Washington who crushed Ukraine’s last semblance of civil governance when they enabled ultra-nationalists and crypto-Nazis to gain government positions after the February 2014 coup.

So it may be fairly asked: What lame brains did not understand yet that Washington’s triggering of “regime change” in Kiev would reopen this entire bloody history of sectarian and political strife?

Moreover, once they had opened Pandora’s Box, why was it so hard to see that an outright partition of Ukraine with autonomy for the Donbas and Crimea, or even accession to the Russian state from which these communities had originated, would have been a perfectly reasonable resolution?

Certainly that would have been far preferable to dragging all of Europe into the lunacy of the current anti-Putin sanctions and embroiling the Ukrainian factions in a suicidal civil war.