There have been few politicians in modern times who have done more to undermine personal liberty, capitalist prosperity, small government and especially world peace than the Cheney Clan. So upon Liz Cheney’s ouster from the #3 job in the US House GOP hierarchy, we say: Good riddance!

And, no, we don’t begrudge her vote to impeach the Donald. The man is such an insufferable bully-boy and megalomaniac that upon his richly deserved exile from Washington her “yes” vote amounted to little more than a slightly offensive Bronx cheer.

But what is profoundly offensive about the Cheneys is their central role in high-jacking the Republican Party in behalf of the demented worldview of a small priesthood of neocon intellectuals. The latter have turned the Warfare State of the now defunct cold war with the Soviet Union into a globe-spanning imperialist monster that has bled America dry fiscally and unleashed unjustified destruction and mayhem all around the planet in a manner that would have put even Imperial Rome to shame.

The immorality, stupidity and monumental fiscal waste of the neocon Forever Wars is bad enough, but actually there is something even more lamentable.

To wit, in today’s world, prosperity and liberty depend more than ever on fiscal rectitude and a conservative party that fights relentlessly and effectively to uphold it. Otherwise, the inherent self-aggrandizing proclivities of the state and the pork-barrel propensities of elected politicians will mushroom unchecked.

Yet impairment of the fiscally conservative party was the basic and original reason why the Reagan Revolution failed. It was hard enough to get elected GOP legislators to walk the plank in behalf of canceling popular Washington handouts or curtailing the entitlement benefits of up to 45% of the public that gets checks directly or indirectly from Uncle Sam. And that was even with the tailwind of a charismatic communicator in the Oval Office.

But when they were asked to face the slings and arrows of domestic interest groups and beneficiaries enraged by the Gipper’s budget cuts while simultaneously voting for massive defense increases even larger than the domestic cuts, well, they just didn’t.

After the early 1981 round of modest spending cuts it was all over except the shouting because the incipient neocons of the day convinced Reagan that the economically and industrially collapsing Soviet Union was still striving for world domination and first strike nuclear capacity, when both propositions amounted to exaggerations, lies and self-serving propaganda of the military industrial complex.

As a result, Reagan essentially threw in the towel on domestic spending retrenchment to save his huge and wholly unnecessary defense buildup. In turn, that meant that virtually no domestic programs of material import were abolished, thereby insuring that the programs modestly cut in 1981 could live for another day and an eventual recovery and make-whole, which is what actually happened. 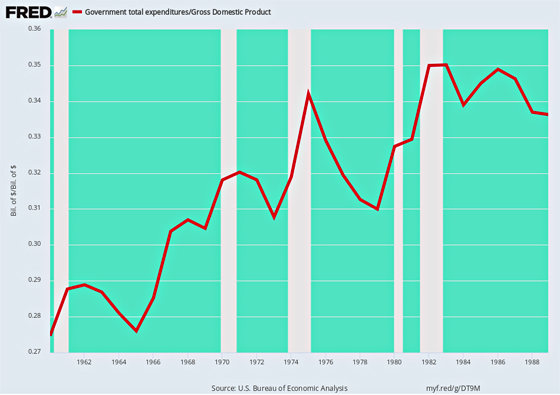 Still, contrary to neocon revisionism, the Reagan defense buildup did not cause the sudden collapse of the Soviet Union in 1991. It was the inherent impossibility of communist dictatorship and central planning that caused its economy to fail, the morale of its people to wither and its military to run out of resources.

This not only put the lie to the Reagan defense buildup, but, more importantly, offered the Republican party a historic reprieve. It could now jettison its embrace of Big Government on the Pentagon side of the Potomac and its politically motivated acquiescence to the Welfare State to assure funding for the the Warfare State.

But that was not to be and it’s Liz Cheney’s old man more than anyone else who is responsible. By becoming a stalwart war-hawk, he helped lose the strategic moment in history in 1991 when the shell of the Soviet Union formerly disappeared from the face of the earth, bringing to a close the 75-Years War that incepted with the “guns of August” in 1914.

At that point, America needed a Secretary of Defense who could see that the waters of war had parted, and that the Warfare State which had barnacled American governance for most of the years since the Great War could now be dismantled. Destiny had, in fact, bestowed upon Washington a golden opportunity to lead the world to disarmament and a restoration of the status quo ante of 1913—a world at peace and enjoying a flowering of global commerce, prosperity and freedom like never before.

What America got, instead, was a brash advocate of Washington hegemony in a now so-called “unipolar” world and an arrogant champion of applying military power or the threat of it against weak states like Iraq, Iran and North Korea which did not bend to Washington’s edicts, even if they presented no national security threat to the American homeland (they clearly didn’t).

Indeed, Dick Cheney emerged during those years as the foremost advocate of the American Imperium, and not unsurprisingly so. We had known him as a colleague in the US House as a moderate conservative on the issues, but also as a man in a hurry to accumulate power. That he did by rising to the rank of House GOP Conference Chairman after 1985, the same position that Liz Cheney holds today.

So when Bush the Elder called upon him to become defense secretary in 1989, Cheney was by then a 50-year old who had spent his entire career suckling from the public teat.

That started in the Wisconsin statehouse in 1966 and thereafter he was quickly off to Washington as a Congressional intern in 1969. There he soon hitched his star to Don Rumsfeld in the Nixon White House, eventually working his way up the slippery slope to Chief of Staff to President Ford. And that was followed by election to Congress from Wyoming in 1978 and embrace of the neocon national security ideology during his years in the US House in the 1980s.

The man’s sins as Secretary of Defense were history changing. He fully supported Bush the Elder’s rash drawing of a line in the sand during Saddam’s petty quarrel with the Emir of Kuwait over OPEC quotas; the latter’s alleged theft of oil from Iraq via directional drilling along their artificial border that had been affixed by the Arab League as recently as 1960; and the war debts to Kuwait that had stemmed from Saddam’s Gulf States supported invasion of Iran during the 1980s.

The fact is, America had no dog in that hunt and should have never intervened military, but essentially did so because it could for the first time since WW II owing to the Soviet Union’s disappearance.

What added insult to injury, however, was Dick Cheney’s personal diplomacy in convincing Saudi Arabia to permit several hundred thousand American troops to be deployed on the sacred lands of the two holy places, the catalyst which turned America’s anti-Soviet mercenary army in Afghanistan, Osama bin-Laden and his al-Qaeda jihadists, into implacable enemies. The war on terrorism which inexorably followed thereupon was essentially the spawn of Cheney’s foolish brinkmanship in a middle eastern world he did not remotely understand and which presented no threat to the safety and security of America anyway.

Likewise, it was Cheney and his neocon pals in the administration of Bush the Elder who launched the unwarranted demonization of Iran, which became another bloody thread in the neocon hegemony. The phony “leading state sponsor of terrorism” charge, in fact, has justified Washington’s destructive meddling in the region ever since.

Ironically, after Washington helped Saddam Hussein make war on the Iranians during the 1980s, Cheney ultimately put him to the gallows during the regency of Bush the Younger, paving the way for his fortunately aborted plan to take out Iran’s embryonic uranium enrichment facilities with nuclear bombs.

The single most important development attendant upon the collapse of the Soviet Union in 1991, of course, was the opportunity for NATO to declare victory, fold its tent and dissolve.

Alas, that was not to be, either, because it was Dick Cheney and his neocon henchman who got the NATO allies into the first Gulf War and conceived of the perversely misguided strategy of bringing the former eastern European satellites of the Soviet Union into NATO. So doing, they laid the foundation for today’s utterly pointless and dangerous confrontation with Russia owing to NATO’s hostile presence on its very doorstep.

Needless to say, the Cheneys are a case of the rotten apple falling directly and completely from the poisoned tree. To our knowledge, Liz Cheney has never strayed an inch from the neocon line on any of the Forever Wars, Washington’s foolishly provocative pressure on Russia or the current insane $800 billion national security budget.

Undoubtedly, the Donald’s rejection of the neocon imperium, poorly and inconsistently executed as it was, is what turned the Cheneys into enemies. And for that, at least, he deserves some credit.

‘Moreover, if his misguided followers in the ranks of House Republicans can now get rid of the Cheney Clan, he deserves even more.

At least that would be a start toward the restoration of a conservative party free from the toxic influence of Washington’s neocon cabal, and therefore capable of re-engaging with its real mission in American democracy—that of bringing Leviathan to heel on both sides of the Potomac.