Of course, we have no doubt the robo-machines and momo traders will strain for the above mentioned 50-DMA and 200-DMA chart points just overhead; and probably next by plucking some morsel out of tomorrow’s jobs report that allegedly proves Goldilocks still has a pulse, thereby inciting some 11th hour dip-buying by the algos.

But we have a newsflash for the casino: Goldilocks doesn’t have much pulse. It’s all over except the shouting.

And the tell for that was the stunning stupidity of last night’s announcement that the CFO of Huawei, the world’s largest telecom company, national champion of the Red Ponzi and pride and joy of Mr. Xi’s politburo, was nabbed by the US sanctions cops while making a flight change at the Vancouver airport.

For crying out loud. This latest victim of the Washington sanctions gestapo, Wanzhou Meng, is the daughter of the company’s founder, who, in turn, is one of China’s most revered and Beijing-connected industrialists.

But this isn’t just an "oops!" The loathsome neo-cons twins – Pompeo and Bolton – sitting on Trump’s right side at the Buenos Aires dinner apparently didn’t tell him that she was actually being nabbed at the very moment they were slicing their steak.

After all, the Chinese have a thing about saving face, and this stunt literally ripped Emperor Xi’s right off his forehead. 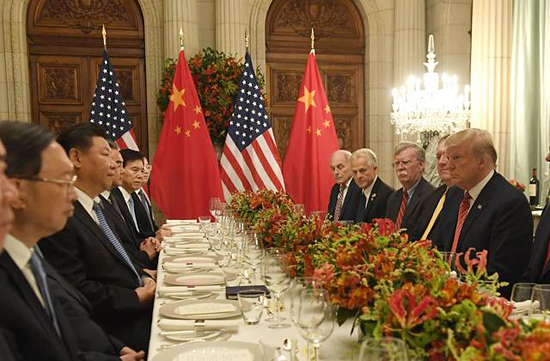 Yet the real oops is not this one hideously stupid episode. It’s the whole sweeping, global-spanning sanctions regime that Imperial Washington has put in place over the last several decades.

There are now more than 30 countries under sanctions for behavior and policies that the grandees of the Potomac disapprove of; and more than 500,000 individuals – mostly higher ranking foreign businessman and government officials – who travel abroad or engage in international commerce at risk of being nabbed or having their goods and assets confiscated by the Washington sanctions police.

As the Huawei cases makes deadly clear, however, the neocon’s Empire of Sanctions is an anti-American jobs destroyer if there ever was one. That’s especially the case for higher level exports of semi-conductors and other tech components which are incorporated into finished products abroad.

In those instances, Washington’s oppressive sanctions regime essentially says to foreign producers, become an enforcer of the neocon’s demented sanctions regime or expect to become enforced upon yourself.

Or, in the alternative, don’t buy parts and components from US companies.

Even then, the Empire of Sanctions is just a poster boy for the much, much larger problem. Namely, Imperial Washington has succumbed to rotten policies across-the-board including the money-printing madness of the Fed, massive public and private debt, fiscal debauchery like never before and, now, the Donald’s lurch into an unhinged Trade War with the very Achilles Heel of the whole global regime of Central bank driven Bubble Finance and faux prosperity.

That is, the steaming mountain of debt, speculation and malinvestment which we call the Red Ponzi. It was destined to eventually collapse of its own weight anyway – perhaps slowly like the old Soviet Union.

But throw on top of its own unsustainable economics the Donald’s simple-minded conviction that trade deficits equate to theft and that the US can absorb 25% tariffs far longer than China – plus the neocon campaign to vilify and confront China politically and militarily as well as on trade – and you have an altogether different kettle of fish.

To wit, the possibility of sudden, severe, globe-shaking breakdown of the Red Ponzi – a prospect that we scarcely dare think about. But one which we know for sure would leave the chart-monkeys hanging from the rafters.

In any event, whether the Red Ponzi succumbs soft and slow or hard and sudden, the time may be near at hand when hourly chart points cease to matter, and when the dazed denizens of the casino start desperately wondering what’s happening and why.

That is to say, when once again the political, policy, macroeconomic and financial market fundamentals matter.

And when they do, it won’t be a pretty picture that the sleepwalkers at both ends of the Acela Corridor wake up to.

In a long podcast discussion with Tom Woods yesterday we took up the big picture fundamentals, and noted that peace, capitalist prosperity and personal liberty are at risk when the Warfare State and Empire are ridding high and when Washington is populated with statists and interventionists whose policies are inimical to capitalist prosperity and constitutional liberty.

It so happened that our conversation was recorded at the very time that Donald Trump was sitting in the row of former presidents at the funeral of George H. W. Bush.

The sight of it reminded us that in the great scheme of history, Bush the Elder blew the best chance in a century for peace and surcease from the crushing fiscal burden of the Warfare State when the Soviet Union slithered off the pages of history in 1991; and that the Great Disrupter is fast lowering the boom on the faux prosperity of the last several decades, which was purchased with the bad money policies of the Keynesian central bankers and the soaring, unsustainable debts that it enabled both the public and private sectors to accumulate.