The Great Disrupter was in fine fettle Wednesday. First he scolded Germany for investing in a natural gas pipeline from Russia that makes all the sense in the world and then blasted it for not spending money on defense it doesn’t need.

Well, I have to say, I think it’s very sad when Germany makes a massive oil and gas deal with Russia, where you’re supposed to be guarding against Russia, and Germany goes out and pays billions and billions of dollars a year to Russia……On top of that, Germany is just paying a little bit over 1 percent, whereas the United States, in actual numbers, is paying 4.2 percent of a much larger GDP. So I think that’s inappropriate also. You know, we’re protecting Germany, we’re protecting France. We’re protecting everybody. And yet we’re paying a lot of money to protect.

But not to worry. The talking heads of bubblevision say today’s market dip is the pause which refreshes. It’s still "risk-on" because by their lights when push comes to shove no mere politician – including the Donald – is going to do anything that the boys and girls on Wall Street might find troubling.

They apparently don’t dare – as was well and truly proven in late September 2008. When the remnants of principled Republicans voted down the TARP bailout of Wall Street, the Dow instantly plunged by 7% or $1.2 trillion, which would be equivalent to a 1700 point meltdown at today’s index level.

Of course, that particular hissy fit brought the GOP pols scampering back to the House floor. Having gotten their heads right in the interim, they marched back up the hill to approve George Bush’s $700 billion package of crony capitalist loot.

There hasn’t been even a close call since then. The only thing the gamblers really fear, apparently, is that a central banker might look at them cross-eyed. But as we told CNBC viewers yesterday, no central banker has the backbone to even wrinkle his brow in the direction of Wall Street.

We also told them that a bone-crushing trade war is coming. That’s because the Donald has no idea what he’s doing and is triggering an avalanche of bouncing billiard balls on the $17 trillion global trade table that is too complex and too interactive to even fathom and which, therefore, will be nigh impossible to stop.

Needless to say, our bubble vision hosts were having none of it. Since the Russell 2000 – the index of America’s home-based small and midsized companies – hit an all-time record yesterday, albeit at 90X its meager earnings, they averred the market is attesting that no serious trouble looms.

Really, that’s exactly what they said, as per the attached clip.

Likewise, when we mentioned 43-years of continuous and growing US current account deficits, Mike Santoli, a casino croupier if there ever was one, suggested there is nothing to see here, implying that viewers should move along toward the buy key on their trade stations.

After all, America’s huge current account deficits – $7 trillion in the last 15 years alone – are allegedly just the accounting record of happy campers all around the world cheerfully sending their savings to America so that we can buy their goods and live high on the hog.

Besides, Santoli intoned, what’s the "emergency" if it’s been going on for 43 years?

Which, of course, is exactly what the 43-year smoker said right before he was felled by lung cancer.

What we are saying is that its dangerous out there because the conventional wisdom has incorporated big memes and postulates that are fundamentally untrue.

In this particular case, for crying out loud, the world is not sending the US its "savings".

To the contrary, other central banks have spent 3o years pumping-up their own fiat monies in order to scoop-up unwanted US dollars, thereby sequestering America’s prodigious debt emissions in the vaults of foreign central banks. And that was done, of course, to suppress their own exchange rates and boost export industries so that they could sell America even more goods on credit.

This is sustainable? You can borrow your way to everlasting prosperity?

We will have much more to say on this topic in the future because in his blunderbuss manner, the Donald is finally bringing it all to a head. Not withstanding that a tariff war is exactly the wrong solution, Trump is actually asking the right question: To wit, how in the world can the US still be running an $800 billion trade deficit long after the world economy was allegedly fixed by ZIRP and QE?

The fact is, the US’ massively imbalanced trade accounts are the flip-side of the very hollowed out economy in Flyover America that put the Donald in the Oval Office.

And yet establishment groupthink doggedly insists that the richest big country in the world can borrow indefinitely from the mostly poorer ranks elsewhere on the planet, and that sooner or later the Donald will flinch from his quest to fix the problem because Wall Street will take him to the woodshed if he doesn’t.

We’d call that head-in-the-sand insouciance, and suggest it is exactly reason why the coming correction will be so tumultuous. And the comforting theory that the Donald is all bark and no bite on trade is not the end of the complacency, either.

Both ends of the Acela Corridor, in fact, are riven with dangerous groupthink that is utterly detached from reality.

With that in mind, the topic at hand is another of these groupthink falsehoods and provides another angle on why the current third great central bank fostered financial bubble of this century is fixing to burst.

Trump: ….. I don’t know what you can do about it now, but it certainly doesn’t seem to make sense that they paid billions of dollars to Russia and now we have to defend them against Russia.”

Well, here’s a news flash for the Donald: You don’t need to your budget-busting $716 billion defense budget to defend Germany from Russia because there is absolutely no reason to believe the latter wants to attack Germany or any other country in Europe.

Indeed, the very idea is just plain madness – yet the quest for ever more funding for the Warfare State is exactly what is helping to bring-on a thundering crisis in the bond pits just ahead.

To the contrary, what Trump should have said was well capsulized by Bruce Fein in a recent post:

……. President Donald Trump should tell the other 28 other members what Congressman John Randolph of Virginia told Greek proponents of American military assistance during their war of independence against the Ottoman Empire: “Let us say to those seven millions of Greeks, ‘We defended ourselves, when we were but three millions against a Power, in comparison to which the Turk is a lamb. Go and do thou likewise.’”

Now that’s exactly right. As shown by the table below, the NATO-28 (excluding the US) are now actually spending $250 billion per year on defense (2017). That’s 4X Russia’s entire military budget of $61 billion.

So what is NATO doing with all those tens of billions that wouldn’t keep the Russkies at bay – even if they had aggressive intentions, which by the record they most surely do not?

Likewise, the GDP of Russia is but $1.4 trillion compared to $18 trillion for the NATO-28. So is Cool Hand Vlad so completely foolish and reckless as to think that he could invade and occupy territories that have an economy 13X bigger than that of Russia?

Actually, it’s far more ludicrous than that. As we have often pointed out, Russia is a giant hydrocarbon province attached to some wheat fields, timber lands and mineral deposits – all dependent upon an aging work force afflicted with an undue fondness for Vodka etc.

What that means is that Russia must export its commodities big time or die. In fact, during 2017 Russian exports totaled $357 billion or 26% of its GDP. And 55% or nearly $200 billion went to Europe!

Moreover, when you breakdown Russian exports it is plain to see that the industrial maw of Europe is the port of first call for its vast tonnages of exported commodities. These included $173 billion of oil and gas and $60 billion of iron, steel, aluminum, precious metals, forest products, fertilizers, grains and copper, among others.

Finally, the table on defense spending by country below speaks for itself as to the purported Russian threat. If the German government really feared that Russian tanks would be soon rolling through the Brandenburg Gates, it would have more than 20 operational tanks, and it would spend far more than $40.6 billion or 1.2% of GDP to defend itself.

And the same is even more true of the former Warsaw pact countries that are located cheek-by-jowl on Russia’s border. Yet Romania spends the tiny sum of $2.8 billion or 1.2% of GDP on its military, while the figure for Hungary, which learned all about Soviet-style invasion in 1956, spends only $1.2 billion or barely 1.0% of GDP. And besides that, its intrepid leader, Viktor Orban, doesn’t even support NATO’s ridiculous sanctions on Putin’s cronies and allies.

And as for the allegedly threatened Baltic states, their combined defense budgets are less than $1.5 billion, representing a miniscule 1.7% of combined GDP; and Bulgaria, fast upon the Russian Lake called the Black Sea, spends only $660 million or 1.4% of its GDP.

In short, European policy action on the defense spending front trumps all the hot air that wafts from NATO’s spanking new Brussels headquarters. Their governments and parliaments positively do not think they are threatened by the Russian Bear because they aren’t.

What would help alot, therefore, is for the Great Disrupter to forget about his unfortunate infatuation with the idea that bigger is always better, and do what no other American politician in thrall to the Warfare State has been unable to do since 1991 when the Soviet Union slithered off the pages of history.

That is, declare "mission accomplished" with respect to NATO and disband it forthwith.

You could call it a Mercy Killing, and yet a couple more NATO summits like this one, and the Europeans themselves may well start begging for exactly that. 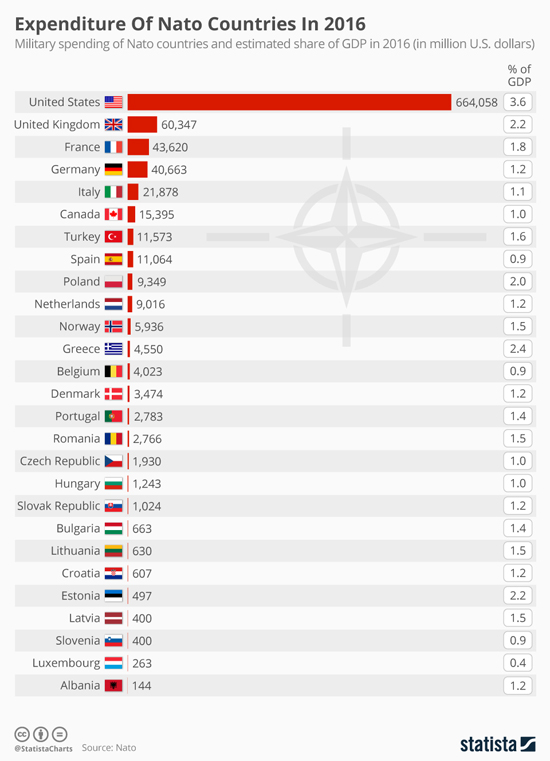