At his so-called Cabinet meeting this morning, the Donald basically threatened Iran with annihilation if it does what 15 other signatories to the nuclear non-proliferation treaty (NPT) do every day: Namely, increase production of industrial grade nuclear fuel (3.5%-5.0% purity) at its enrichment plant at Natanz – which, in any event, is crawling with IAEA inspectors.

Moreover, it really doesn’t matter whether Trump was play-acting in the style of Art of the Deal or that the JPAOC could be improved.

The mere threat of a military attack from the White House is madness because it arises from blatant lies that have absolutely nothing to do with US national security. Nor, for that matter, the security of any other country in the region, including Saudi Arabia and Israel.

The real purpose of the Donald’s missile-rattling is nothing more than helping Bibi Netanyahu keep his coalition of right wing religious and settler parties (Likud, United Torah Judaism, Shas, Kulanu and the Jewish Home) together, thereby maintaining his slim 61-vote majority in the 120-seat Knesset.

Netanyahu’s malefic political glue is the utterly false claim that Iran is an "existential threat" to Israel because it is hell-bent on getting the bomb.

But that’s where the whopper comes in. It amounts to the ridiculous postulate that Iran is so fiendishly evil that if it is involved in the nuclear fuel cycle in any way, shape or form – presumably even just operating a uranium mine – it is only a matter of months before it will have a bomb.

As a matter of record, of course, Netanyahu has been saying this since the early 1990s and he has always been wrong because there were never any facts or logic to support his blatant fear-mongering. For example, here is the cartoon-style, evidence-free "proof" that he offered way back in 2012. 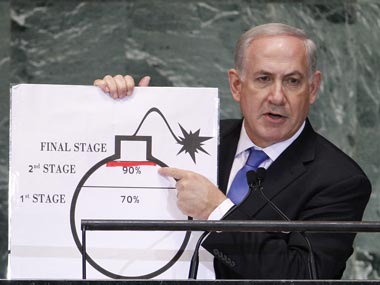 The truth is more nearly the opposite. Not only the IAEA, but also the CIA and its 16 fellow spook agencies, agree that Iran has not had anything which remotely resembles a nuclear bomb weaponization program for the last 15 years; and that even the one it ran briefly in 1999-2003 – out of fear that Tehran’s mortal enemy, Saddam Hussein, might be doing the same – was essentially a series of science experiments that didn’t get close to making even a single bomb.

The fact is, 98% of the enriched uranium that Iran had on hand at the time of the 2015 nuke deal was in the LEU (low enriched uranium) category and was not remotely relevant to a bomb. And the 2% balance (450 pounds) was enriched to the 20% medical isotope level (also non-bomb grade), which, according to IAEA verification, has all been shipped out of the country.

Iran never had, nor does it possess now, anything close to the 90% enriched weapons grade (HEU) material that is an absolute pre-requisite for a nuclear bomb via the U-235 route.

Moreover, it couldn’t possibly go the plutonium route to a bomb, either. Pursuant to the deal, its plutonium reactor core at Arak – which theoretically could have produced enough plutonium for two bombs per year – has been completely removed and filled with concrete. Even the tin foil brigade among the neocons can’t plausibly suggest otherwise because the whole process has been viewed and verified by the IAEA inspectors.

In sum, if the Donald succeeds in killing the JPAOC, Tehran would have every right under the 193-nation NPT (which it signed but Israel, North Korea, Pakistan and India didn’t) to go back to making more industrial grade reactor fuel for civilian power.

Back in the day, the great Dwight D. Eisenhower called the latter Atoms for Peace. But after yesterday’s blatantly stupid action, the Donald has in effect declared himself to be the middle east’s Spanker-in-Chief, promising to annihilate Iran for doing exactly what Ike had in mind.

Even that is not the half of it, however. By turning the US war machine into an auxiliary operative in Bibi Netanyahu’s political machine, the Donald has put the Deep State First like never before.

That’s because without the Iranian Bomb cover story, there would be absolutely no reason for the US to pick sides as between the Iran-Shiite crescent and the Saudi-Wahhabi-petro state axis in the middle east.

In the first place, there is no threat whatsoever in the region to the safety and security of the American people. With the strategic nuclear triad already in place, there is no risk of nuclear blackmail by either side, neither of which has nuclear weapons nor any prospect of an offensive intercontinental first strike capacity, anyway.

As for the threat of a conventional attack on the American homeland from the middle east, the very idea is preposterous. Saudi Arabia’s 21st century military would be grounded in a week without US technical aid and spare parts; and the GDP of Iran amounts to less than one week of US output.

Likewise, the Persian Gulf is not an American lake, and the solution to high oil prices is high oil prices. That is to say, it has now been unequivocally demonstrated during the nearly five decades since the 1973 oil crisis that global energy supply and price is a matter for the free market, not the Fifth Fleet.

As we explained awhile back, a true America First national security policy could be done for $250 billion per year – the amount needed to maintain the strategic triad and protect the airspace and shorelines of the homeland.

But the Deep State luxuriates in $800 billion of annual spending for the military and the empire, and the unspeakable prosperity of the military-industrial-surveillance complex and the beltway’s army of consultants, think-tanks, NGOs, lobbyists, "law" firms and racketeers.

So it desperately needs enemies and threats to justify the half-trillion dollar per year excess. Ironically, Donald the erstwhile Swamp drainer is now doing his part to ensure that this yawning gap remains permanently bridged.

In part, that is no fault of his own. The biggest threat inflation lies in the demonization of Putin and the anti-Russian hysteria that suffuses the Imperial City.

That already had a head of steam after the Deep State enabled coup on the street of Kiev got the anti-Putin war-drums beating loudly back in February 2014. But then when the Donald unaccountably won the Presidential election and Obama’s inner circle invented the Russia collusion hoax to explain it and potentially reverse it – the Russia threat inflation was off to the races.

Without the Putin demonization and anti-Russian hysteria – even the compliant congressional politicians who function as handmaidens to the Deep State would never have been persuaded to embrace a $700 billion military budget or confirm a war-mongering thug like Mike Pompeo to serve as Secretary of State.

Still, the Donald’s utter blindness to the Big Lie about Iranian nukes and its role as the purported greatest state sponsor of terror amounts to the coup de grace.

It will lead to a rapidly intensifying confrontation between the two blocks in the middle east and turn the Persian Gulf into the front-line of battle, drawing both the Russians and Chinese ever deeper into the confrontation on the side of the Iranian cause.

You’d think this directional dynamic would be more than obvious. And that it absolutely guarantees a fiscal trainwreck, and the bond market carnage which must inexorably follow.

And that gets us to the madness at the other end of the Acela Corridor. On a day in which there was no good news whatsoever – except that defense spending will go ever higher making the impending yield shock even worse – the stock market rose by another 1%.

There is no mystery as to why, however. Honest price discovery and the discounting of real world information was totally destroyed by the Fed’s monetary central planners years ago.

The only thing the casino discounts today is the trading points on the hourly, daily and weekly stock charts, and the presumption that both the fiscal and central banking branches of the state stand ready to "stimulate" whenever a serious breach occurs on the charts.

Nothing could be more mistaken – and for reasons we will amplify upon in Part 2.

But the spoiler alert is this: The private sector is now swamped under record and unsustainable debt in both the household and business sectors. By succumbing to the most incendiary Deep State meme of all – the Iranian Nuke lie – the Donald has now made a public debt catastrophe an absolute certainty.