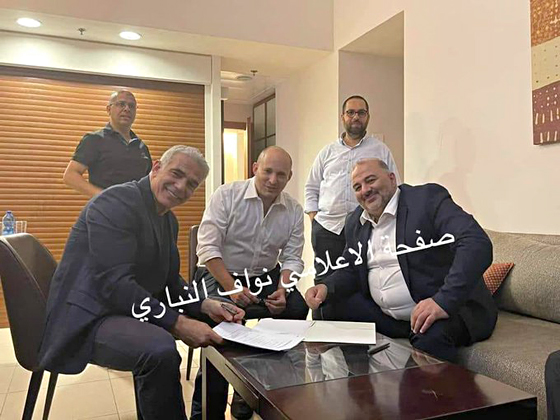 The photo was unprecedented. It showed Mansour Abbas, leader of an Islamist party for Palestinians in Israel, signing an agreement on Wednesday night to sit in a “government of change” alongside settler leader Naftali Bennett.

Caretaker Prime Minister Benjamin Netanyahu will fervently try to find a way to break up the coalition in the next few days, before a parliamentary vote takes place. But if he fails, it will be the first time in the country’s 73-year history that a party led by a Palestinian citizen has joined – or been allowed to join – an Israeli government.

Aside from the symbolism of the moment, there are no other grounds for celebration. In fact, the involvement of Abbas’s four-member United Arab List in shoring up a majority for a government led by Bennett and Yair Lapid is almost certain to lead to a further deterioration in majority-minority relations.

There will be a reckoning for this moment, and Israel’s 1.8 million Palestinian citizens, a fifth of the population, will once again pay the heaviest price.

The sole reason that this makeshift coalition exists – the only glue holding it together – is the hostility of the various parties towards Netanyahu. In most cases, that is not a hostility towards his political positions; simply towards him personally, and towards the corrupting stranglehold he has exerted on Israel’s political system for the past 12 years.

The “change” referred to by this proposed government coalition begins and ends with the removal of Netanyahu.

It barely needs stating again that Bennett, who will serve first as prime minister in rotation with Lapid, is even more right wing than Netanyahu. In fact, three of the new coalition’s main parties are at least, if not more, rabidly nationalistic than the Israel’s longtime leader. In any other circumstances, they would be enthusiastically heading into government with his Likud Party.

As Bennett and Mansour huddled inside a hotel near Tel Aviv to sign the coalition agreement as the clocked ticked down on Lapid’s mandate to form a government, far-right demonstrators noisily chanted outside that Bennett was joining a “government with terror supporters”.

Much of the ultra-nationalist right is so incensed by Bennett’s actions that he and other members of his Yamina party have been assigned a security detail for fear of an assassination attempt.

No one has forgotten that it was Bennett’s own settler camp that produced Yigal Amir, the man who in 1995 shot dead the then-prime minister, Yitzhak Rabin, in a bid to foil the Oslo peace accords with the Palestinians. Amir killed Rabin in large part because the latter was seen to have betrayed the Jewish people by allowing “Arabs” – Palestinian parties in parliament – to prop up his minority government from outside. They did so to pass legislation necessary to begin implementing the Oslo process.

The chain of events that followed the assassination are well-known. Israelis lurched further rightwards and elected Netanyahu. The Oslo track with Palestinian leader Yasser Arafat was derailed. A Palestinian intifada erupted. And – coming full circle – Netanyahu returned to power and is now Israel’s longest-serving prime minister.

Today’s potential Yigal Amirs are doubly offended by Bennett’s behavior. They believe he has stabbed the right’s natural leader, Netanyahu, in the back, while at the same time allowing Abbas – seen by the right as Hamas’s man in the Knesset – to dictate policy to the Jewish owners of the land.

It was notable that Bennett and Abbas were the last to sign the coalition agreement, after both made great play of digging in their heels at the final moment for more concessions. Each risks inflaming their own constituency by being seen to cooperate with the other.

Commentators will try to spin this agreement between a settler leader and the head of an Islamic party as a potential moment of healing after last month’s unprecedented inter-communal fighting inside Israel.

But such a reading is as misleading as the narrative of the recent “Jewish-Arab clashes”. In fact, protests by Palestinian youths against systematic discrimination escalated into confrontations only after Israeli police turned violent and let Jewish gangs take the law into their own hands. Just as the balance of power on the streets was weighted in favor of Jewish vigilantism, so the balance of forces in this new coalition will work solidly against Abbas.

When Bennett spoke publicly on Sunday, as the horse-trading began in earnest behind the scenes, he underscored his credentials as the former head of the Yesha Council of Jewish settlements. That will be the theme of this proposed “government of change”.

Pact with the ‘devil’

During the coalition-building negotiations, the more moderate Labor and Meretz parties conceded time and again to the demands of the far-right and settler parties on ministerial positions and policy. That is because the moderates have nowhere else to go.

They have built their whole electoral strategy on ousting Netanyahu at any cost, using the anti-Netanyahu street protests of the past two years as their rallying cry. They cannot afford to be seen as missing this opportunity.

By contrast, as the death threats highlight, Bennett has far more to lose. Some 60 percent of his party’s voters recently told pollsters they would not have backed him had they known he would join a coalition with Lapid. Equally at risk are Gideon Saar, whose New Hope party broke away from Likud to challenge Netanyahu, and Avigdor Lieberman, a settler politician whose right-wing base has found in him their local strongman.

These three must now do everything in their power during the term of this new government – if it happens – to prove to their constituencies that they are not betraying the far-right’s favorite causes, from settlements to annexation. Baiting them from the sidelines at every turn will be Netanyahu, stirring up passions on the right – at least until he is forced to step down, either by his party or by a verdict against him in his current corruption trial.

The Achilles heel Netanyahu will keep prodding as viciously as he can is the fact that his rivals on the right have made a Faustian pact with the Arab “devil”. Netanyahu has never been shy to incite against the Palestinian minority. To imagine he will restrain himself this time is fanciful.

Bennett understands the danger, which is why he tried to legitimize his dealings with Abbas on Thursday by calling him “a brave leader”. But Bennett was also keen to emphasize that Abbas would not be involved in any security matters and that he was not interested in “nationalism” – in this case, indicating that Abbas will neither offer support to Palestinians under occupation nor seek to advance national rights for Palestinian citizens of the kind Israeli Jews enjoy.

Early on Thursday, Netanyahu had decried the new coalition as “dangerous” and “left wing”. He will most likely be in the driving seat, even while in opposition. Far from healing the country, a “government of change” could rapidly provoke yet more street violence, especially if Netanyahu believes such a deterioration would weaken Bennett as prime minister.

Abbas, the United Arab List leader, reportedly held out until last before signing. His whole electoral strategy was built on a promise to end the permanent exclusion of Palestinian parties from Israel’s national politics. He will be keen to show how many benefits he can extract from his role inside government – even if most are privileges the Jewish majority have always enjoyed by right.

Abbas trumpeted that the agreement would “provide solutions for the burning issues in Arab society – planning, the housing crisis, and of course, fighting violence and organized crime”. He has reportedly secured some $16bn in extra budgets for development and infrastructure, and three of the many Bedouin villages the state has long refused to recognize will be given legal status.

Abbas is also pushing for the repeal of a 2017 law that makes tens of thousands of homes in Palestinian communities inside Israel vulnerable to demolition.

One of his fellow legislators, Walid Taha, observed of the United Arab List’s new role: “For decades, Arab Israelis [Palestinian citizens] have been without any influence. Now, everyone knows that we’re the deciding votes as far as politics goes.”

Abbas has every incentive to use such claims as a whip to beat his rivals in the Joint List, a coalition of several other Palestinian parties that are staying in opposition. He needs to emphasize his role in bringing about change to make them look weak and irrelevant.

But despite the promises that lured Abbas into the new government, he will face a rough ride getting any of them translated into tangible changes on the ground.

Lapid will be busy as foreign minister, selling this as a new era in Israeli politics. Meanwhile, Benny Gantz, the current defense minister who just oversaw the destruction yet again of Gaza, will offer continuity.

Back home, the key internal ministries will be held by the far-right. Lieberman will control the purse strings through the finance ministry, directing funds to settlements before Palestinian communities inside Israel. Bennett’s partner, Ayelet Shaked, will be interior minister, meaning the settlements in the occupied West Bank will be treated as more integral to Israel than the communities of Palestinian citizens. And Saar will be justice minister, helping to drive the legal system even further to the right.

Faced with this bloc, all of them keen to be seen as upholding the values of the right, Abbas will struggle to make any progress. And that is without considering the situation he will find himself in if Bennett pushes for annexation of the West Bank, or authorizes another police invasion of al-Aqsa, or oversees the expulsion of Palestinian families from Sheikh Jarrah, or launches a fresh attack on Gaza.

Abbas put the coalition negotiations on pause during Israel’s assault on Gaza last month. He won’t be able to do the same from inside the government. He will be directly implicated.

As a result, Palestinian citizens are likely to end up growing even more disillusioned with a political system that has always treated them with a mix of hostility and disdain. They will finally have representatives inside government, but will continue to be very much outside of it. The triggers for the protests that erupted among young Palestinians in Israel last month are not going away.

The most likely scenario over the coming months is that Netanyahu and Bennett will engage in a furious competition for who deserves the title of champion of the right. Netanyahu will seek to break apart the coalition as quickly as possible by inciting against Abbas and the Palestinian minority, so he has another shot at power. In turn, Bennett will try to pressure Likud to abandon Netanyahu so that Bennett can collapse the “government of change” as quickly as possible and rejoin a large majority, far-right government with Likud.

Rifts will not be healed; coexistence will not be revived. But the preeminence of the ultra-nationalist right – with or without Netanyahu – will be restored.

This article is available in French on Middle East Eye French edition.

Jonathan Cook won the Martha Gellhorn Special Prize for Journalism. His latest books are Israel and the Clash of Civilizations: Iraq, Iran and the Plan to Remake the Middle East (Pluto Press) and Disappearing Palestine: Israel’s Experiments in Human Despair (Zed Books). His website is www.jonathan-cook.net. This originally appeared in the Middle East Eye.

Jonathan Cook is a writer and journalist based in Nazareth, Israel. His latest books are Israel and the Clash of Civilizations: Iraq, Iran, and the Plan to Remake the Middle East (Pluto Press) and Disappearing Palestine: Israel's Experiments in Human Despair (Zed Books). Visit his Web site. View all posts by Jonathan Cook