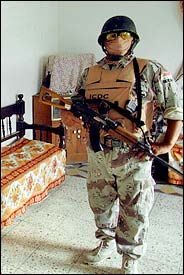 Thanks to Antiwar.com for the parenthetical “empty” inserted into the N.Y. Times‘ hyped headline regarding the “vast” (well, ok, a quarter of a skyscraper’s worth, anyway) underground insurgent hideaway. Such a facility found occupied = triumph; found empty = ominous. That’s why we need you guys.

I read your article with considerable interest because some of the arguments you make were the kinds of arguments I faced during my visit to Palestine and Israel last August. Palestinians in the Diaspora and some within the country insisted that I should be talking to and teaching nonviolence to the Israeli Jews rather than the Palestinians, which is true only in the sense that all of us need to learn nonviolence to create a society where such conflicts would not occur. However, in the context of the present, if Israel believed in nonviolence they would not have committed the aggression in the first place. I believe that the philosophy of nonviolence – and I insist it is a philosophy and not a strategy – is a tool for the victim and not the aggressor. Let me reiterate, an aggressor would not be an aggressor if he or she believed in nonviolence. I am reminded of the words expressed by Napoleon, a master at warfare, who said: The general who holds the initiative wins the war.

This is what I tried to impress upon President Arafat during my talks and upon the people of Palestine. What has happened for 55 years is that the Palestinians have reacted to Israeli provocation. In other words, the Palestinians have allowed the Israelis to set their agenda. Out of understandable frustration, the Palestinians have resorted to the kind of violence that has been brought into urban streets and the doorsteps of innocent people. As you rightly point out, the Palestinians have opened themselves to being branded as “terrorists” and have earned very little sympathy around the world. There is no doubt that administrations around the world have devised sophisticated ways of dealing with nonviolent activists. But that is the nature of philosophies. The philosophy of violence thrives because it has been constantly changed and improved upon. It thrives on fear. The more fear one can generate, the greater the control. The philosophy of nonviolence has not worked because not only has it been mutilated but no one has made any significant attempt to understand the basic principles. I disagree with those who say it is a strategy. If one needs an engineer to do a job, one does not look in medical schools for the right talent. We are today ready with violent responses because we live, think, behave, and respond violently when faced with a conflict. Correspondingly, therefore, if one has to respond nonviolently it is essential that one lives, thinks, behaves, and acts nonviolently.

Nonviolence cannot be practiced if one is filled with hate, anger, frustration, and a desire to destroy. The basis of nonviolence is that we recognize our adversary is wrong and we are going to help educate them and change their way of thinking. This can happen only through an appeal to the heart not only of the opponent but of the whole world. That appeal, as Gandhi demonstrated, can come only through self-suffering and sacrifice. This does not mean meekly submitting to injustice, but suffering the consequences of a moral stand against injustice. This is why it is essential for the Palestinians to find the “Gandhi” within them and through their experience reveal to the Israelis the “Gandhi” within them.

As a San Franciscan, I am especially frustrated by Nancy Pelosi, my purported Congressional representative, who has been “spineless” on the Iraq exit issue, though her constituents overwhelmingly want the U.S. military out of Iraq.

On Nov. 2, 2004, 63 percent of San Franciscans voted “to urge the United States government to withdraw all troops from Iraq and bring all military personnel in Iraq back to the United States.” Yet, on May 25, 2005, Pelosi and a minority of Democrats voted with the Republicans against the Woolsey amendment to HR 1815 calling for a U.S. plan for withdrawal from Iraq.

Apparently, Pelosi’s justification for protracting our participation in the Iraq quagmire is similar to the flawed and disastrous rationale that kept us in Vietnam, to our nation’s everlasting detriment and shame.

I have repeatedly called and written Pelosi to tell her that we need a plan now for withdrawal of the U.S. military from Iraq. But so far, I have gotten no response.

I urge your readers, especially San Franciscans, to let Pelosi know their opinions on Iraq.

I do not know what planet you are from, however I happen to be from planet Earth; more specifically I was born in Hungary, and I can tell you with total certainty that when the Soviet forces kicked out the Nazi Germans in the spring of 1945, they were not considered as liberators by the preponderant majority of the Hungarian people, but rather as a new brand of fascist occupiers. I personally witnessed the Hungarian revolution in 1956, and I remember when your so-called Soviet liberators shamelessly reoccupied Hungary, even though the then Soviet ambassador to Hungary, Yuri Andropov, promised a complete withdrawal of Soviet military forces from Hungary. Then, too, they were not considered as liberators but rather as a truculent occupation force. If you are so enamored with Soviet-style communism, I suggest you emigrate to North Korea where I am sure you will feel at home.

I think Mehdi Mir has not quite got it right when he writes of “the incapability of governments to admit mistakes.” Certainly the current Bush administration does not admit mistakes, but surely it genuinely believes that it hasn’t made any significant ones.

The entirely reasonable, view that Bush et al. have been mistaken over Iraq and Afghanistan assumes that the outcomes have been bad. For anyone who disapproves of death, destruction, and the squandering of taxpayers’ money, they are disasters. But if your primary concerns are awarding your cronies vast profitable contracts and having the excuse to enact new authoritarian legislation, then things are going just fine. I suspect that the neocons would be even happier if there had been a bit less resistance in Iraq and they could have smashed up Syria and Iran, too. However, precisely how well the war is going is of secondary importance to having continuous, profitable war.

For the Bush administration to have, from their own standpoint, made a mistake would mean that in retrospect they would have to regret embarking on their crusade. I have no doubt they regret the odd detail, but I don’t for a moment believe they will ever regret the endeavor as a whole.

I am certain that the Iraq and Afghan conflicts are militarily unwinnable and will continue until the U.S. government gives up. I don’t believe that the current administration will ever give up. We will have to wait for another U.S. administration.

From the World’s Most Dangerous Place

I think Praful Bidwai should abandon that “from the world’s most dangerous place” marquee under which he features his blather. Everybody knows that the South Asian region is nothing of the kind. He need not pander so shamelessly to the asinine characterization that Bill Clinton adopted on the eve of his visit to India and Pakistan in 2000. It may be marketable, but it is not authentic. There is none of the existential antagonism that today characterizes the struggle in Palestine; neither is there any of the underlying venom of the disastrously misconceived crusade in Iraq. So it is time to get real and stop playing to the gallery, Bidwai.