By the twisted logic of Imperial Washington you could say the Iranians were asking for it. After all, they had the nerve to locate their country right in the middle of 35 U.S. military bases!

Then again, your saner angels may ask: What in the hell is Washington doing with a massive military footprint in a region and in a string of backwater countries that have virtually no bearing on homeland security, safety and liberty?

In fact, Washington destroyed the former for no good reason and based on egregious Big Lies about Saddam’s nonexistent WMDs and sheltering of al-Qaeda. That turned Iraq into a failed state hellhole pulsating with sectarian frictions and anti-American grievances – even as the rump state of Iraq centered in Baghdad fell under the control of Iran-friendly Shiite politicians and militias.

At the same time, Iran itself is zero threat to the American homeland. It’s tiny $350 billion GDP amounts to 6 days of US annual output and its $20 billion defense budget is equivalent to what the Pentagon wastes every 8 days.

Militarily, it has no blue water navy, an air force that could double as a cold war museum and a short and medium range missile force that is self-evidently dedicated to defense and deterrence in the region, not an attack on the USA way over on the yonder side of the deep blue seas.

Its 300 or so active aircraft, for example, include 175 US F-4, F-5, F-14 and sundry transports, helicopters and trainers purchased by the Shah during the 1970s and kept together since the revolution with bailing wire and bubble gum. It also fields 60 or so Soviet vintage MiG-29s and Sukhoi Su attack aircraft – plus a few dozen European and Chinese planes of mostly ancient design. 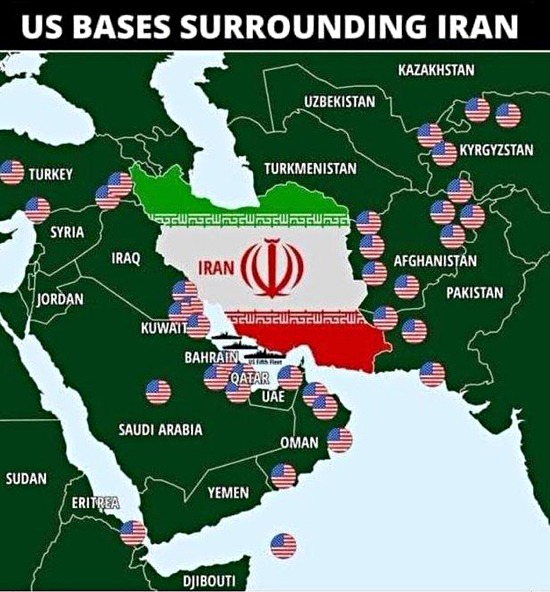 Likewise, even its most advanced medium range cruise missile (Soumar) can barely get to Rome, Italy, to say nothing of Rome, Georgia.

As is evident from the yellow, green, red and black circles on the map below, which circles outline each missile’s striking range, the overwhelming bulk of Iran’s missile force has a range of 500 miles or less. These missiles are capable of hitting targets in the immediate vicinity of the Persian Gulf, or roughly the same area which encompasses the 35 military bases designated by American flags in the graphic above.

Stated differently, Iran’s extremely modest military capacities are not remotely about an offensive threat to the American homeland. They are overwhelmingly about defending itself in its own neighborhood, where Washington has been intervening and occupying with massive firepower and hostile intent for decades. 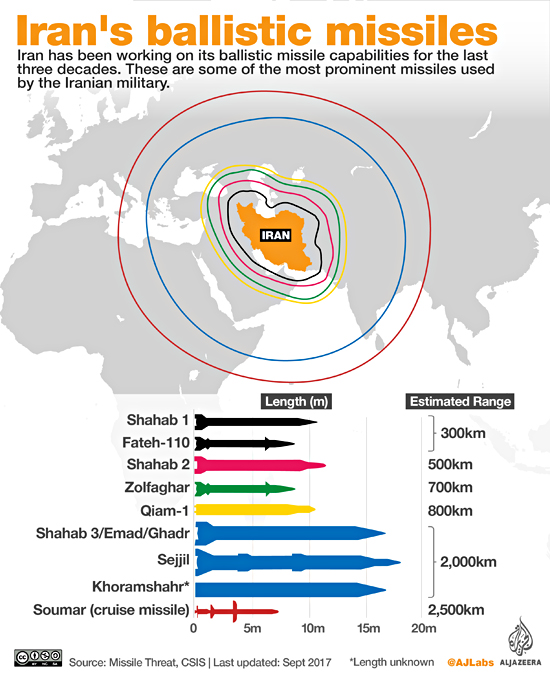 Therein, of course, lies a hint. More than 13 years after Saddam’s last hurrah on a Baghdad gallows, the US still has upwards of 30,000 troops and contractors in the immediate vicinity of the Persian Gulf. But why?

It can’t be owing to ISIS. The Islamic State was never much more than a no count salient of dusty, woebegone towns and villages on the Upper Euphrates straddling Western Iraq and northeastern Syria that was destined to collapse on its own barbaric madness anyway; and which was essentially dispatched by the Russian air force, Assad’s military and the Shiite militia forces organized by the dead man himself, Major General Soleimani.

Likewise, it should be obvious by now that it’s not the oil, either. At the moment the US is producing nearly 13 million barrels per day and is the world’s leading oil producer – well ahead of Saudi Arabia and Russia; and is now actually a net exporter of crude for the first time in three-quarters of a century.

Besides, the Fifth Fleet has never been the solution to oil security. The cure for high prices is high prices – as the great US shale oil and Canadian heavy oil booms so cogently demonstrate, among others.

And the route to global oil industry stability is peaceful commerce because virtually every regime – regardless of politics and ideology – needs all the oil revenue it can muster to fund its own rule and keep its population reasonably pacified.

Surely, there is no better case for the latter than that of Iran itself – with an economy burdened by decades of war, sanctions and mis-rule and an 80-million population that aspires to a western standard of living.

So left to its own devices, Tehran would produce 5 million barrels per day from its abundant reserves. That’s barely one-tenth of its present meager output, which is owing to Washington’s vicious sanctions against any and all customers for its oil and potential investors in modernizing and expanding it production capacity.

So if it’s not ISIS or oil, exactly why does Washington maintain the circle of 35 bases displayed in the graphic above and keep thousands of US troops and other personnel in harms’ way in the region?

Or more to the moment, why has the Donald been unable to bring the forces home as he has so often proclaimed to be his policy?

The answer, of course, is that the foreign policy apparatus of the US government is controlled by anti-Iran neocons and regime changers. We are still in Syria not to fight ISIS, which is gone, but to block Iran’s land route to its allies in Syria and Lebanon (Hezbollah); and we remain in Iraq solely to use it as a base for clandestine US and Israeli attacks on these allies and proxy forces.

These Washington instigated or conducted attacks on Iranian allies, in fact, are why there was growing pressure in the Iraqi government to demand that the US finally leave. These pressures will now become overwhelming in light of this week’s US bombing of five PMF camps (Popular Mobilization Forces) which are Shiite militias that have been integrated into the Iraqi army and which are under the command of its prime minister, and last night’s assassination of their Deputy Commander along with Soleimani.

To be sure, Iran’s choice of allies has nothing to do with America’s homeland security: None of the sovereign governments of Lebanon (where Hezbollah is the leading political party) or Syria or even Iraq (which is an ostensible US ally) have protested these confession (i.e. Shiite) based arrangements and the aid and benefits which flow from them.

That’s because the so-called Shiite crescent is a bogeyman invented by Bibi Netanyahu and is the excuse for his hysterical anti-Iranian foreign policy. The latter is not even designed to enhance Israel’s own security, but to vilify a "far enemy" that can keep his rightwing coalition glued together and himself in power.

Likewise, the US military-industrial complex’s greed and appetite for power and pelf is so voracious that it will embrace any and all missions anywhere on the planet – no matter how stupid or futile or immoral, as per the case of 19-years in Afghanistan – that keep the budgetary loot flowing.

Accordingly, the Washington apparatus conspires to keep the 35 Mideast bases in place and to trigger actions like last night’s insane assassination of Iran’s foremost military leader in order to reify the threat and to periodically stoke tensions and counterattacks that keep missions alive and the forces deployed.

Indeed, we are hard-pressed to imagine a more poignant case of the pot calling the kettle black than Washington’s claim that it had to retaliate owing to actual and expected Iranian "aggression".

For crying out loud, Washington has been demonizing, ostracizing and economically attacking Iran for decades, and is now literally attempting to destroy its economy and society through is oil sanctions and its "maximum pressure" campaign that aims to bring the fate of Saddam Hussein and Muammar Gaddafi to its top leaders in Tehran.

So do ya think a regime under a veritable existential threat might gravitate toward retaliation as an alternative to extinction?

And we needs be clear about the matter of striking back in self defense. Washington’s current sanctions campaign against Iran is so aggressive and brutal that it constitutes war by any other name.

When you surround a sovereign nation with an armada of land, sea and air-based high-tech lethality and than declare outright economic war on it with a barely-disguised aim of regime change, it must and will fight back however it can.

That’s why Secretary of State Pompeo’s statement justifying the Donald’s act of naked aggression is so hideous.

Washington is putting the entire nation of Iran at risk in the very place where God or evolution, as the case may be, formed the peninsula on which it resides; and it is doing so without any Iranian provocation against the security of the American homeland whatsoever.

But this neocon knucklehead has the gall to insist that when it comes to the actual anti-Iranian belligerents (i.e. U.S. forces) Washington has bivouacked where they have no business being at all, that not a hair on their head should come to harm.

That’s Imperial arrogance of a kind rarely seen in a world history which is littered with exactly that.

"I can’t talk too much about the nature of the threats. But the American people should know that the President’s decision to remove Soleimani from the battlefield saved American lives," Pompeo told CNN.

The IRGC general had been "actively plotting" in the region to "take big action, as he described it, that would have put hundreds of lives at risk," according to Pompeo.

Undoubtedly, things will now spiral out of control because the Iranian regime must and will retaliate for Soleimani’s death. Indeed, by vaporizing the latter, the Donald has now also vaporized any chance of actually implementing the "America First" policy upon which he ran, and which was the principal basis for his freakish elevation to the Oval Office.

The fact is, the only decent thing Obama did on the foreign policy front was the Iran Nuke Deal. Under the latter, Iran gave up a nuclear weapons capability it never had or wanted for the return of billions of escrowed dollars (which belong to Tehran in the first place), while putting itself in a straight-jacket of international inspections and controls that even Houdini could not have broken free from.

But the Donald wantonly shit-canned this arrangement, not because Iran violated either the letter or spirit of the deal, but because the neocons – led by his bubble-headed son-in-law and Bibi Netanyahu errand boy, Jared Kushner – blatantly lied to him about its alleged defects.

Indeed, the resulting Washington pivot to the current "maximum pressure" aggression against Iran is fast becoming the Empire most demented and shameful hour – even as it crystalizes like rarely before the difference between homeland defense and imperial aggression.

Under the former, not one American serviceman, contractor or civilian official would be in harms’ way because the ring of hostile bases surrounding Iran would not exist nor would Washington be waging economic warfare on what would otherwise be a prosperous 5 million barrel per day oil trade with the world.

Only empires put their citizens needlessly in harms’ way and thereby trap their leader’s into a cycle of violence which feeds upon itself.

The Donald is now yet another American president ensnared in the kind of tit-for-tat trap that is the modus operandi of Empire First.