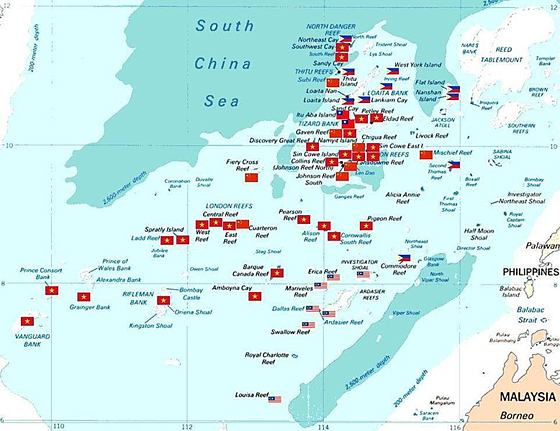 On September 30, a US Navy destroyer, the USS Decatur, sailed within 12 miles of the Gaven and Johnson reefs in the South China Sea’s Spratly Islands. Twelve miles being the “territorial waters” limit set by the UN’s 1982 Convention on the Law of the Sea, the Decatur was met and warned off by a Chinese destroyer.

The US government complains that the Chinese ship maneuvered “in an unsafe and unprofessional” manner, approaching within 45 yards of the Decatur before veering to avoid a collision. Now, CNN reports, “[t]he US Navy’s Pacific Fleet has drawn up a classified proposal to carry out a global show of force as a warning to China.”

The Decatur had no legitimate business in those waters. It was there for one and only one purpose: To rattle the US saber in a continuing domestic propaganda campaign for “containment” of Chinese “expansionism,” (read: “Keep spending lots of money on the US Navy”).

No fewer than six states – China, Taiwan, Vietnam, the Phillipines, Malaysia, and Brunei – assert territorial claims over all or part of the (largely uninhabited) Spratly archipelago. To which, if any, of those states do the Spratlys “belong?” That’s for them to work out between themselves, through arbitration and mediation or maybe even war. The US government, neither numbering itself among those claimants nor having any plausible basis upon which to do so if it wished to, needs to butt out.

In 1821, then US Secretary of State (and later president) John Quincy Adams wrote that the United States “has abstained from interference in the concerns of others …. she goes not abroad, in search of monsters to destroy.”

Adams’s words echo the sentiments of his former rival, Thomas Jefferson, who in his first inaugural address called for “peace, commerce, and honest friendship with all nations, entangling alliances with none.”

While those principles of peace and non-interventionism more often found expression in breach than observance – the Mexican War comes to mind – they fell completely apart with the Spanish-American War, which marked the beginning of the US as a global empire.

We’ve been paying the price ever since: Two world wars, 33,000 American dead in Korea, 58,000 in Vietnam, more than a quarter century of war in the Middle East and Central Asia, and no end in sight.

The rest of the world has paid an even higher price in blood, treasure, and servitude for the imperial games of self-styled “superpowers” – a class the US often holds itself out as the sole remaining example of since the Soviet Union’s 1991 dissolution.

It’s time to retire the “superpower” nonsense entirely, stop gaming other countries’ conflicts to justify our own military-industrial complex’s corporate welfare checks, and let the parties to the Spratly spat work it out among themselves.

Thomas L. Knapp is senior news analyst at the Center for a Stateless Society, letters editor at Antiwar.Com, and publisher of Rational Review News Digest. View all posts by Thomas Knapp