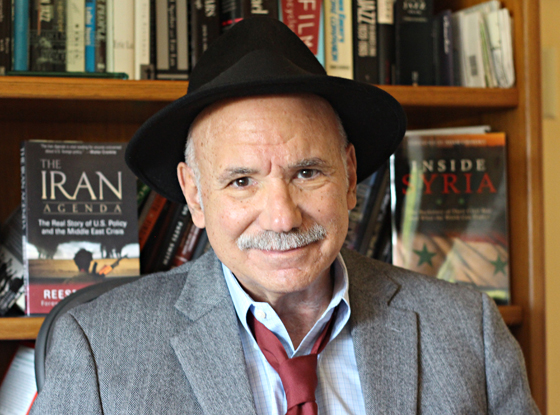 When Reese Erlich died in early April, we lost a global reporter who led by example. During five decades as a progressive journalist, Reese created and traveled an independent path while avoiding the comfortable ruts dug by corporate media. When people in the United States read or heard his reporting from more than 50 countries, he offered windows on the world that were not tinted red-white-and-blue. Often, he illuminated grim consequences of U.S. foreign policy.

The first memorable conversation I had with Reese was somewhere over the Atlantic Ocean on the way to Iraq in September 2002 – as it turned out, six months before the US invasion. He was one of the few journalists covering a small delegation, including Congressman Nick Rahall and former Senator James Abourezk, which the Institute for Public Accuracy sponsored in an attempt to establish U.S.-Iraqi dialogue and avert the looming invasion.

As the organizer of the trip, I was on edge, and I asked Reese for his assessment. Drawing on his extensive knowledge of the Middle East, he provided cogent insights and talked about what was at stake.

After filing stories from various parts of Iraq, Reese returned home to California and we worked together to write alternating chapters of a book that came out two months before the invasion – Target Iraq: What the News Media Didn’t Tell You. (The book is posted online.) Reese’s eyewitness reporting and analysis were crucial to the book.

Reese critiqued the basic flaws in US media coverage then beating the war drums, and he also wrote about the "professional" atmosphere that led US journalists to conform.

As President George W. Bush and Prime Minister Tony Blair methodically lied the US and Britain into a war on Iraq, Reese pointed out: "The Bush and Blair administrations are fighting a two-front war: one against Iraq, another for public opinion at home. The major media are as much a battleground as the fortifications in Baghdad. And, for the most part, Bush and Blair have stalwart media soldiers manning the barricades at home."

In a chapter titled "Media Coverage: A View from the Ground," Reese wrote: "The US is supposed to have the best and freest media in the world, but in my experience, having reported from dozens of countries, the higher up you go in the journalistic feeding chain, the less free the reporting. . . . The journalist’s best education is on the job. In addition to journalistic skills, young reporters also learn about acceptable parameters of reporting. There’s little formal censorship in the US media. But you learn who are acceptable or unacceptable sources. Most corporate officials and politicians are acceptable, the higher up the better."

Reese summed up: "Money, prestige, career options, ideological predilections – combined with the down sides of filing stories unpopular with the government – all cast their influence on foreign correspondents. You don’t win a Pulitzer for challenging the basic assumptions of empire."

While Reese won prizes, including a Peabody Award, he did something far more important – skillfully and consistently challenging "the basic assumptions of empire."

Reese did so with balance and accuracy as a freelancer reporting for such outlets as the Christian Science Monitor, San Francisco Chronicle, New York Times Syndicate, Dallas Morning News and Chicago Tribune.

I saw Reese at work in Iran in 2005 and Afghanistan in 2009. He was meticulous and good-natured even when the journey became exhausting and stressful. Unusual stories were usual for him. It was all in a day’s work when Reese lined up an interview with a grandson of the Islamic Republic’s founder Ayatollah Khomeini or got us to a women’s rights protest at Tehran University, or when he located an out-of-the-way refugee camp in Kabul where we could interview victims of the war.

Along with his radio reports and articles, Reese went in-depth as the author of Inside Syria, The Iran Agenda Today, Dateline Havana, and Conversations with Terrorists. Reese’s firsthand reporting, multilayered knowledge and wry humor enrich those books. Meanwhile, he reached many people via interviews and public appearances, even when he was fighting cancer in his last months (as when he spoke about U.S.-Iranian relations and the Iran nuclear deal in February).

During recent years, Reese’s "Foreign Correspondent" column for The Progressive magazine appeared in kindred online outlets like Common Dreams and the San Francisco-based 48 Hills. His last article – "My Final Column?" – embodies the honesty and deep humanity that made Reese such a wonderful journalist.

Norman Solomon is the national director of RootsAction.org and the author of many books including War Made Easy: How Presidents and Pundits Keep Spinning Us to Death. He was a Bernie Sanders delegate from California to the 2016 and 2020 Democratic National Conventions. Solomon is the founder and executive director of the Institute for Public Accuracy.

Norman Solomon's Made Love, Got War: Close Encounters with America's Warfare State is out now. View all posts by Norman Solomon