Israel’s American lobby has long categorically rejected assertions that Israel is or would ever become an apartheid regime. That position has become more difficult to maintain over time.

Former President Jimmy Carter’s 2006 New York Times bestseller "Palestine: Peace Not Apartheid" argued that Israel’s construction of settlements and control of occupied territories were the primary obstacles to a comprehensive peace agreement in the Middle East. The word "apartheid" provoked an immediate firestorm within the U.S. Israel affinity ecosystem. The Anti-Defamation League (ADL) even accused Carter of "engaging in anti-Semitism" in the book.

In spring of 2014 Secretary of State John Kerry warned world leaders at a closed-door Trilateral Commission meeting that if peace talks failed Israel would become an apartheid state. Israel’s US lobby’s reaction was once again swift. The American Israel Public Affairs Committee (AIPAC) responded that "any suggestion that Israel is, or is at risk of becoming, an apartheid state is offensive and inappropriate." The ADL said Kerry’s remarks were "inappropriate."

At the time, Kerry was pushing hard for a "two-state" solution as the only viable remaining alternative for Middle East peace. Israel would either wind up being a unitary state with second class Palestinian citizens or a state that no longer had the capacity "to be a Jewish state" Kerry claimed. AIPAC indignantly responded that "Israel is the lone stable democracy in the Middle East and protects the rights of minorities regardless of ethnicity or religion."

In 2018 Israel passed its controversial "nation-state law" stating the "right to exercise national self-determination" in Israel was "unique to the Jewish people." It mandated Hebrew as the official language and established "Jewish settlement" as a national value. The Trump administration indulged nearly every Israeli policy initiative. This included silencing campus critics of Israel in the U.S., recognition of Israeli sovereignty over Syria’s Golan Heights, transferring the U.S. embassy to Jerusalem, claiming settlements were legal and a lopsided peace deal. Most of the policies were opposed by strong majorities of Americans.

During the summer of 2020 as Israel made its moves towards formal annexation of West Bank territory, a dozen Democratic Party representatives signed on to a letter to Secretary of State Mike Pompeo warning of U.S. foreign aid cutoffs if Israel proceeded. "Should the Israeli government continue down this path, we will work to ensure non-recognition of annexed territories as well as pursue legislation that conditions the $3.8 billion in U.S. military funding to Israel to ensure that U.S. taxpayers are not supporting annexation in any way." A plurality of Americans polled in 2020 (37.3%) opposed US recognition of Israeli West Bank annexation.

The 2020 letter referred to John Kerry’s earlier warning, saying it "would actively harm prospects for a future in which all Israelis and Palestinians can live with full equality, human rights and dignity, and would lay the groundwork for Israel becoming an apartheid state, as your predecessor John Kerry warned in 2014."

AIPAC again sharply rejected the apartheid label and threatened aid cut-off, saying it would threaten "the U.S.-Israel relationship in ways that would damage American interests, risk the security of Israel & make a two-state solution less likely." Per usual practice, AIPAC did not specify any quantifiable U.S. interests that were served in exchange for Israel’s position as the lead recipient of US foreign aid.

In January of 2021, the Israeli Information Center for Human Rights in the Occupied Territories, B’Tselem, issued a damning report titled "This Is Apartheid." B’Tselem is based in Jerusalem and documents human rights violations in Israel and Israeli-occupied territories. B’Tselem combats official and news media denial of the existence of such violations and works to create a human rights culture in Israel. B’Tselem was founded in 1989 with the support of ten Knesset members and a large group of Israeli lawyers, academics and medical professionals.

The documented evidence and conclusions in the B’Tselem report are compelling: Israel and the territories it occupies already form an apartheid regime. East Jerusalem and the West Bank have already been "annexed in practice." Palestinians, whether citizens of Israel or not, do not have the same rights as Jewish Israeli citizens. Discrimination is observable and endemic. No matter where they live, Israel affords Palestinians "a different package of rights" than Jewish Israelis. The "two-state solution" if it ever was viable, is dead.

While the report made a small splash in January, U.S. news media interest and follow up quickly tailed off. As is the norm, no mainstream U.S. pollster surveyed the American taxpayers who subsidize Israel and whose government supports the regime commercially, diplomatically while lavishing secret intelligence and military support how they viewed the situation. 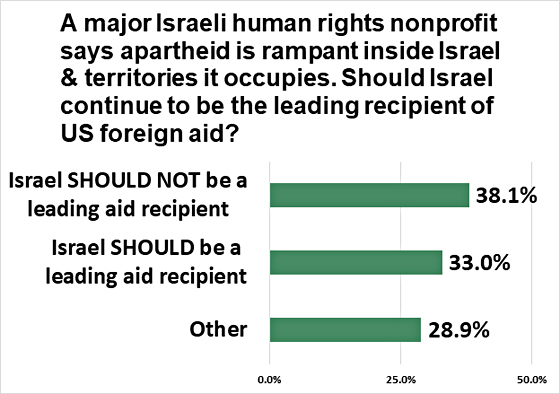 Between March 22-25 IRmep asked a representative sample of 2,194 American adults through Google Surveys whether – given the B’Tselem report – Israel should be a leading US aid recipient. A 38.1 percent plurality said it should not. In fielding the question, the answer order was randomly reversed and the resultant sample bias was 5.7 percent.

A plurality of Americans appear to believe, unlike their government, that systemic discrimination witnessed by credible, local observers should have consequences.

Grant F. Smith is the director of the Institute for Research: Middle Eastern Policy in Washington. IRmep and the Washington Report on Middle East Affairs are co-organizing the annual IsraelLobbyCon on April 17 and 24 with the theme "End US Support for Israeli Apartheid?"