In 2015 the intelligence community acknowledged that it had a "duty to warn" U.S. persons of impending threats of "serious bodily injury." The objective of that "duty" – which has many loopholes – is to compel intelligence agencies to warn individuals or organizations of threats so they can take evasive measures. It affirms a moral obligation intelligence agencies have to those funding – willingly or not – their operations. The duty to warn demands they no longer stand idly by – or worse attempt to exploit credible threats to Americans – as leverage or for other, secret intelligence purposes.

Last fall the US Army Corps of Engineers announced it was finally ready to resume a $500 million toxic waste cleanup of the Nuclear Materials and Equipment Corporation (NUMEC) dump. An earlier attempt at the Pennsylvania site to excavate was stopped after the discovery of unexpected materials. NUMEC’s plant sites in Apollo and Parks Township have long been the subject of litigation over wrongful mass deaths and illnesses caused by toxic pollution.

NUMEC was launched and managed by Zalman Shapiro, a nuclear chemist credited with solving engineering issues for naval nuclear propulsion in the 1950s. His partner, David Luzer Lowenthal was a smuggler with murky ties to Israeli intelligence and industrialist. Luzer organized the emergence of NUMEC from a complicated merger and acquired facilities for NUMEC in a defunct steel mill in the middle of Apollo, Pennsylvania. The Zionist Organization of America, originally chartered to "do any and all things that may be necessary" to support Israel, supplied three of NUMEC’s executives. Zalman Shapiro, Pittsburgh region president of ZOA, Morton Chatkin and Ivan J. Novick who became ZOA’s national president.

Officially NUMEC was a startup supplier of highly-enriched fuel for the US Navy. But two Central Intelligence Agency officials claimed NUMEC’s true purpose was to amass and divert US government-owned highly enriched uranium into Israel’s nuclear weapons program. 300 kilograms of highly enriched uranium disappeared from NUMEC between 1957-1978, with most of it gone by 1966. Material stolen from NUMEC would have been the most likely source for Israel’s ability to ready nuclear weapons for use during the 1967 Six-Day War.

CIA Tel Aviv Station Chief John Hadden, who performed field operations to sample the environment around Dimona for highly enriched uranium – material Israel was incapable of producing on its own – claimed NUMEC was "an Israeli operation from the beginning." CIA Directorate of Science and Technology Deputy Director Carl Duckett testified that "NUMEC material had been diverted by the Israelis and used in fabricating weapons." There were other telltale signs.

That NUMEC was a front operation, following in the footsteps of Israel’s 1940s-era conventional weapons smuggling operations from the US such as Martech, Service Airways, and the Sonneborn Institute, is well-known by the FBI and CIA. Both have released extensive archives of intelligence reports and surveillance photographs of Israeli conventional weapons smuggling from the United States through overseas networks. But both FBI and CIA have fought attempts at full disclosure of clandestine Israeli nuclear weapons related activities in the US, ostensibly because such smuggling has been unpunished and unabated. It is also US policy, under penalty of prosecution, that no federal agency may admit that Israel has nuclear weapons or release information about its program.

A February 2015 lawsuit seeking all of the CIA’s "thousands" of files about NUMEC was ended when the presiding judge refused to allow adding the US Department of Justice – which has worn many hats in the NUMEC affair – as an additional defendant. However some CIA documents were released during the court battle, revealing how the CIA had refused to cooperate with two separate FBI investigations of NUMEC, preferring to cover up damning information obtained from clandestine CIA operations in Israel confirming the diversion.

Documents grudgingly released by the FBI so far reveal the intelligence community likely knows that cost-cutting at NUMEC to achieve its smuggling aims was what made it such a toxic polluter. On May 5, 1969, Shapiro discussed a major toxic spill caused by such shortcuts, most likely with David Lowenthal, since the acquisition of other US companies was also part of the conversation. Shapiro ordered NUMEC workers – who often worked with no protective gear of any kind – to dampen down the spill with picks and shovels to avoid the spread of toxic dust and rain runoff carrying away the waste. Shapiro’s call was wiretapped by the FBI. 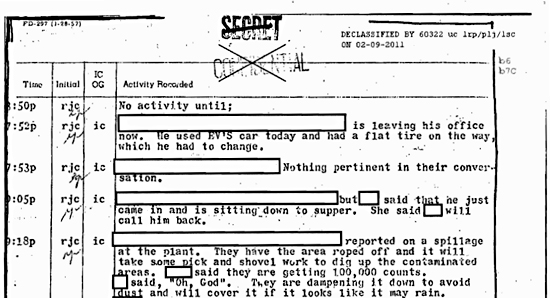 The full phone call summary reveals how Shapiro – who commuted every day from Pittsburgh – considered NUMEC workers as mostly replaceable and expendable.

"It’s not only a bad spill but ‘actually they are operating outside compliance.’ They had the drums all together. They have about 200 drums and estimate that about six a day will corrode through. The trouble lay with a fluoride which was put in to help the decay, and this was not checked. CENSORED said they are also about $230,000 over on their construction costs for the scrap plant. Z [Zalman Shapiro] said if they could get other people, there would be a lot of firing."

NUMEC workers and town residents, exposed to radiation levels hundreds of times higher than health standards allowed, continue to suffer fallout and death from NUMEC. In addition to residents, the US Army Corps of Engineer contractors restarting the cleanup could benefit greatly from knowing what material is likely present – as well as what is not – at the site. Residents and the cleanup crew would also benefit from knowing of any intelligence on the potential threat that materials stolen decades ago might be returned or buried under cover of the cleanup at the site for crews to "find."

Legal precedents suggest such toxic exposure as occurs at NUMEC could amount to "oppression, fraud, or malice" and be sufficient for victims to recover damages from polluters. However, neither the CIA nor the FBI have met their current obligations under "duty to warn" to officially alert the victims of NUMEC and contractors precisely what dangers they are still facing as the cleanup recommences.

Such overdue disclosures could also allow NUMEC’s victims to pursue claims against the perpetrator and beneficiary of the fraud and pollution – the Israeli government. Evidence stored away in FBI and CIA files could fully reveal ZOA’s NUMEC involvement. If ZOA did more than unwittingly provide key members of management, ZOA’s $40 – plus million in current assets could go a long way toward compensating the long-suffering Pennsylvania victims of Israeli nuclear smuggling and partially shift the burden of paying to clean up after NUMEC away from American taxpayers.

Grant F. Smith is the author of the book Divert! NUMEC, Zalman Shapiro and the diversion of US weapons-grade uranium into the Israeli nuclear weapons program. He is director of the Institute for Research: Middle Eastern Policy in Washington, D.C. and plaintiff in the 2015 lawsuit calling on the CIA to release all NUMEC-related files.