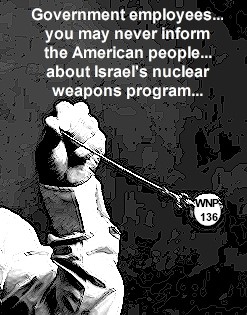 Governmental lying by omission involves intentionally leaving out important facts to foster broad popular misconceptions. In 2012 the Obama administration promulgated a gag order in the form of a secrecy classification guideline – WNP-136 (PDF) – banning all federal agency employees and contractors from discussing, writing about, or releasing government information about Israel’s nuclear weapons program.

When two agencies enforcing the gag order received a Freedom of Information Act request in 2015, they released WNP-136 only after redacting most of the content.

Backers of the gag order hope to undermine informed public debate about nuclear proliferation in the Middle East, ongoing illicit transfers of know-how, material and technology from the US to Israel, to maintain a spotlight on Iran as the region’s nuclear proliferation threat as well as quell debate about whether the US is truly a champion of nuclear non-proliferation. But the overarching purpose of WNP-136, curiously titled "Guidance on Release of Information Relating to the Potential for an Israeli Nuclear Capability," is even more nefarious. The core objective behind WNP-136 is to perpetuate a single massive and ongoing violation of US law.

Since the Symington & Glenn Amendments became law in the mid-1970s, all administrations have faced public pressure to explain why the US gives away the lion’s share of the foreign aid budget to a country has long been known to have a disqualifying secret nuclear weapons program.

Now part of the Arms Export Control Act, the Symington and Glenn amendments demand special protocols for any US aid delivery to non-NPT signatory countries that traffic in nuclear weapons making technologies like Israel is known to do. Recently released CIA files from another lawsuit reveal Senator John Glenn’s intense concern that the Israeli diversion of US nuclear weapons-grade uranium from Apollo, Pennsylvania was not handled with due diligence. Yet, under pressure from the Israel lobby’s campaign finance network, no administration has ever enforced Symington or Glenn’s required protocols toward Israel in publicly known or black-budget aid disbursements. Congress, subject to the same Israel lobby pressures, has similarly ignored its own law when passing massive annual aid giveaways to Israel, even though it has not amended the law to exempt (or retroactively exempt) Israel. One key backer of US aid to Israel, Senator Chuck Schumer, admitted to a reporter on camera that Israel has nuclear weapons.

Instead, Presidents from Gerald Ford through the George H.W. Bush administration simply turned a blind eye toward any Israeli actions triggering Symington & Glenn. Yet this informal cooperation was insufficient to the Israeli government. The New Yorker revealed that beginning with the William Clinton administration, Israeli officials started soliciting and receiving promises to subvert Symington & Glenn in the form of secret presidential letters. Although the Trump administration was reportedly angered by the Israeli pressure campaign for a letter as it worked to reverse Obama’s key programs from Obamacare to the Iran nuclear deal, it has so far not reversed WNP-136.

The results of this effort to gag informed responses to valid public inquires is revealed in years of on-camera contortions by US executive branch officials making themselves the object of domestic ridicule and international condemnation.

A 2018 lawsuit in the DC District Court seeking an injunction for unredacted release of the two-page WNP-136 "Israel nuclear gag order" is now in its final stages. Defendants Department of Energy and the Department of State argue that WNP-136 is properly classified. Edith Chalk, the Energy Department’s Director of the Office of Technical Guidance oversaw processing of the 2015 Freedom of Information Act request. In a July affidavit, Chalk affirmed (PDF) WNP-136 cannot be disclosed under FOIA Exemption 1, because it was under "Executive order to be kept secret in the interest of national defense or foreign policy." Chalk cited Executive Order 13526, the most recent, which provides the basis for classification and declassification to safeguard national security information. Chalk also argued that Exemption 7(E) permits retention of records "compiled for law enforcement purposes…if such disclosure could reasonably be expected to risk circumvention of the law."

Eric Stein, Director of the Office of Information Programs and Services of the Department of State also submitted an affidavit in July that WNP-136 is properly classified under Exemption 1. (PDF) Stein argued that a "withheld sentence contains information relating to the potential for an Israeli nuclear capability. Release of this information reasonably could be expected to cause serious damage to the national security of the United States, both by harming diplomatic relations with the United States and Israel through the release of information that has substantial implications for Israel’s security, and by upsetting the geopolitical security situation in the Middle East region, which represents a longstanding security interest of the United States."

Federal judges handling FOIA cases are notoriously deferential to "Exemption 1" affidavits submitted by agency officials proclaiming apocalyptic outcomes if classified files are released. Such was done in the case of photographs of detainee mistreatment in Abu Ghraib prison, Osama Bin Laden’s death photos, and after a court ordered the CIA to release its "torture tapes" (which the CIA destroyed anyway). Yet present within Executive Order 13526 is a powerful waiver provision that theoretically allows FOIA requesters to challenge secrecy classifications made for the wrong reason – a prohibition on using secrecy to "conceal violations of law."

The prohibition on secrecy classification with the aim of concealing violations of the law is not new. It was the product of both congress and the White House. An early version of the prohibition was included in the Nixon administration’s 1972 Executive Order 11652 banning use of classification "in order to conceal inefficiency or administrative error…" Congress amended Exemption 1 in 1974, and the Carter Administration’s 1978 Executive Order 12065 on classification and declassification also added the clarifying words "or conceal violations of the law" as a prohibited justification for classifying government information. However, despite its longevity, few plaintiffs have been able to use the waiver to win release of government files in litigation

Bennett v Department of Defense was an early attempt. Plaintiff Jonathan Bennett sought DoD records about the infiltration of agents and arms from the US into Cuba to overthrow Castro after the fall of Batista in 1959. Bennet argued that "responsive documents are not properly classifiable because they may show violations by government officials of our criminal laws prohibiting conspiracies to destroy property within, and the launching of expeditions against, a foreign country with which the United States is at peace."

In deciding against Bennet in 1976, the presiding judge ruled that it is, in fact, perfectly legal for the US – as opposed to US citizens acting of their own volition – to clandestinely launch military campaigns against nations with which the US is at peace. "… such criminal laws are not proscriptions against activities conducted by the government, but are designed to prevent individuals, acting in a private capacity, from interfering with the foreign relations of the United States."

More recently a judge denied People for the American Way access to files concerning NSA’s Terrorist Surveillance Program or TSP. In 2006 a judge ruled, "Even if the TSP were ultimately determined to be illegal, it does not follow that the NSA’s decision regarding the classification of materials relating to the TSP was made ‘in order to…conceal violations of law.’ Because of the deference due to the NSA in matters of national security, and in the absence of any evidence to the contrary, the Court must accept defendant’s reasonable explanation that the materials were classified to prevent damage to the national security."

Convincing presiding Judge Tanya C. Chutkan that the primary reason WNP-136 exists is to "conceal violations of the law" should not be as difficult as the previous attempts to seek a waiver of Exemption 1 of the FOIA by alleging "violations of law." In 2015 Chutkan triggered widespread outrage from neoconservatives and other key branches of the Israel lobby when she ordered the release – during the final Iran nuclear deal negotiations – of a DOD commissioned 1987 report on Israel’s nuclear-weapons making infrastructure. Israel’s labs were modeled on American national laboratories, and engaged in hydrogen bomb work. As the same forces agitate more intensely for US military strikes on Iran over its nonexistent nuclear weapons program, Chutkan must weigh decades of previously released "evidence to the contrary" of DOE and DOS affidavit assertions that WNP-136 serves any bona fide national security interest – and most of that evidence is from the US government sources which courts hold to be authoritative in such proceedings.

The public record is clear that President Obama came under enormous pressure by reporters to admit Israel had nuclear weapons, but finally buckled and signed a fourth secret letter at the insistence of the Israelis never to talk about it before finally issuing WNP-136. The fact that the Israeli government was the primary force calling for the secret letters indicates how little the gag order has to do with US "national security," as opposed to maintaining a massive flow of illegal aid payouts that Israel and its US lobby take for granted. WNP-136’s original classification as "secret" and "noforn" (no distribution to foreign nationals) is similarly laughable. The government of Israel – for all intents and purposes – is the true author and sole beneficiary of WNP-136.

Defendant assertions that the Department of Energy compiles records for "law enforcement purposes" (FOIA Exemption 7) specifically targeting Israeli nuclear weapons-related smuggling is similarly risible. The agency played mostly an obstructive role during the massive Israeli heist of government owned weapons-grade uranium from US contractor NUMEC. The Department of State recently extended for 10 years, rather than revoked, the long-term resident visa of Israeli Hollywood-based movie producer Arnon Milchan. DHS and FBI records reveal the Milchan-Netanyahu-Smyth nuclear weapons technology smuggling ring illegally exported 700 nuclear triggers and other dual-use items from the US to Israel with no law enforcement consequences commensurate with the magnitude of the theft.

Censoring WNP-136 is consequently not at all about US national security or law enforcement, but rather violating the Symington and Glenn amendments on Israel’s behalf, as additional evidence presented in the complaint demonstrates. (PDF)

If the judicial branch of government is still in proper working order, Americans will soon be able to see for themselves precisely how a two-page gag order masquerading as a secret classification guide in fact conceals "violations of the law" by undermining Symington and Glenn. They may then finally become concerned enough to halt unlawful US aid to Israel, which since Symington and Glenn became law surpasses $228 billion.

Grant F. Smith is research director of the Institute for Research: Middle Eastern Policy and the plaintiff in civil action no. 18-CV-00777 filed in April seeking unredacted release of WNP-136. Smith was the plaintiff in an unsuccessful 2016 lawsuit seeking to halt and claw back US foreign aid to Israel arguing that disbursing the aid violated the Take Care Clause and the Administrative Procedures Act. In March of 2018, the DC Court of Appeals upheld a lower court ruling that the particularized injuries that provided standing (punitive fees and financial burdens incurred in seeking improperly withheld government files about Israel’s nuclear weapons program) could only be adjudicated in a legal complaint filed solely under the Freedom of Information Act.