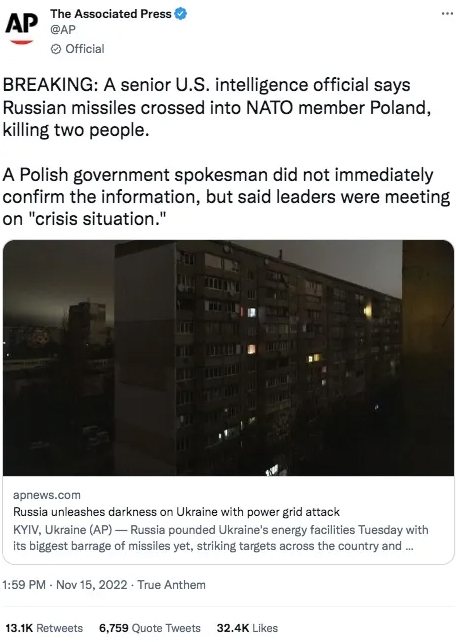 There would be a series of followups, see how the story morphed on archive.today. The story featured a host of bylines including John Leicester, James LaPorta, Vanessa Gera, Zeke Miller (White House correspondent) and Michael Balsamo.

AP rules say reporters can only grant anonymity to a source if “the source is reliable”. But if they prove themselves to not be reliable, shouldn’t the anonymity be rescinded?

Kyle Griffin, executive producer of both MSNBC’s Ayman Mohyeldin and Mehdi Hasan shows, ran with the worst form of the AP report to thousands of more retweets:

By Tuesday evening, the Washington Post would use the frenzy to queue up an extreme distillation of the NATO Charter: “Poland is a member of NATO. A strike on the country could thus invoke NATO’s Article 5, which states ‘an armed attack against one or more of [the members] in Europe or North America shall be considered an attack against them all’ and force may be used.”

Ukrainian President Volodymyr Zelensky would claim: “I have no doubt that it was not our rocket.”

But even as AP was putting out their false stories Tuesday afternoon, others were pointing to evidence that Russia didn’t fire the missiles that hit Poland. And others raised good points – some effectively arguing that AP shouldn’t have run with the story. Responsible Statecraft in “How a lightly-sourced AP story almost set off World War III” the following day gave a breakdown of how some of this played out, especially how local players falsified or tried to leverage the story.

On Wednesday morning, I contacted AP, asking a series of questions beyond the obvious. In particular, would the AP name the falsifying source? Nicole Meir from AP finally replied Wednesday evening, but didn’t answer any of the questions. She simply pointed me to the “Correction: Russia-Ukraine-War story” they had just issued.

But, a central question remains: Why is the AP still protecting a source it now says fed it false information?

In my piece “Should Media Expose Sources Who Lied to Them?” from 2017, I argued that not exposing falsifying sources is “like having a loaded gun lying around.” When a crisis happens, “a government source wanting to smear a foreign government, or even help provoke war, has the mechanisms to do so without fear of consequence or accountability.” The source can hide behind anonymous quotes, and their media contact hides behind anonymous sources. Both are effectively off the hook.

The solution is for falsifying sources to be unmasked so we get accountable speech.

Part of the bargain of anonymity is truthfulness. Why should a serious media outlet protect the anonymity of a source who just fed it false information? So they can do it again?

As I detail in my article, there have been major precursors to this that ended in disaster. Judith Miller at the New York Times in 2002 cited an anonymous Bush/Cheney administration official who claimed that government scientists thought aluminum tubes Iraq was reportedly attempting to acquire were for a nuclear weapons program. That was false and used to propel the case for war. When I confronted her in 2005 and asked her who the source was, she wouldn’t say.

In contrast, in 1996, the Wall Street Journal turned on a source orchestrating a smear campaign by Big Tobacco targeting whistleblower Jeffrey Wigand. This story was told in the film “The Insider.”

So, which world do we want? One where falsifying sources get away with lies – so we get disastrous wars – or do we want a world where they don’t get away with it, so we get some measure of accountability for major wrongdoing?

Thursday morning, the Washington Post ran with “How an anonymous source raised a false alarm of a Russian strike on Poland” by Elahe Izadi and Paul Farhi. But, as with past instances, the Post did not raise the prospect of the AP naming the official.

It is possible that AP can offer a compelling reason why the source shouldn’t be unmasked. They would need to spell it out very seriously. We don’t know what the source’s motives were, but on its face, as others have argued, it seems like part of a coordinated attempt to invoke NATO articles 4 and/or 5 and risk triggering a wider war. Even risking a nuclear war. Or perhaps it’s an extreme form of saber rattling toward Russia. The AP should name the source, in part so they can be questioned and scrutinized.

As it is, AP seems intent on sweeping all this under the rug. The URL for the original series of stories now brings up the “correction” – so accessing the actual reporting may be difficult going forward (that’s why I link to the archive page above.) That is similar to what CNN did after it retracted an article on Trump’s associate’s alleged ties to Russia, replacing the original story with an editor’s note.

AP’s designation on Twitter is “Official”. If this isn’t seriously addressed, it’s hard to see why it shouldn’t be deemed “U.S. state-affiliated media.”

Sam Husseini is an independent journalist who writes at husseini.substack.com and founder of VotePact.org – which helps break out of the two party bind. View all posts by Sam Husseini