I recently discovered the extent to which Democrats routinely vote for Republican policies and expenditures at the committee level. Such enabling committee-level "yes" votes often fly under the radar, since members of Congress who cast these damaging votes often vote "no" on the House or Senate floor. They then point to their "no" floor votes as evidence of their ostensible opposition to the policy that they just encouraged and enabled by their much more powerful committee "yes" vote.

In the House, a floor vote is only one of about 435, while a committee vote packs a much more powerful punch. For example, the Democratic complement of the House Armed Services Committee is only 31, as one can discover upon visiting the HASC website. (The GOP complement is 26.) Among the smiling faces of these Democratic committee members is Ro Khanna, a self-described "progressive." Khanna has an active presence on social media and in email communications, where he touts his antiwar stance and his staunch opposition to "endless war" and excessive military spending.

The problem? All 31 of these smiling Democrats routinely vote in the HASC for Trump’s wasteful, saber-rattling Pentagon budgets. This includes the most recent exorbitant and highly controversial $741 billion budget as contained in the FY2021 National Defense Authorization Act (NDAA). Many Democrats have railed against excessive military spending by Trump, in particular during a public health crisis in which many Americans have been laid off, lost their employer-based health care, and face eviction during a deadly pandemic that has already killed over 150,000. While desperately needed aid to working Americans is being held up by a GOP Senate, these 31 Democrats just voted to advance Trump’s military budget to the floor with the amount unchanged and with nearly every provision that Trump wanted. They did the same the previous year, FY2020. Yet ironically, most GOP members of the HASC opposed last year’s Pentagon budget based on their disagreements with Democratic committee members’ amendments. This shows how readily the Democratic majority could have stopped Trump’s hugely excessive Pentagon budget in its tracks had they wished to do so. GOP members feel free to vote to hold up their own President’s budget in committee if they disagree with certain provisions of the Democratic majority. Yet Democratic members seem unwilling to put even temporary brakes on a Trump military budget, even as members of his own party feel free to do so.

When challenged on his HASC “yes” vote on Twitter, Khanna had this to say: 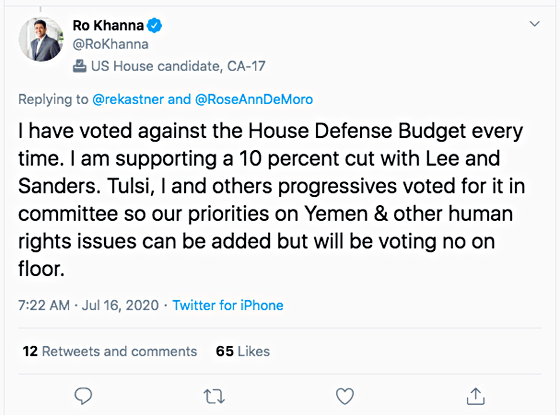 First, we have the glaring inconsistency of voting “yes” in a powerful committee on what Khanna openly admits is a highly unsatisfactory bill. Khanna’s stated purpose was to count on (long-shot) floor amendments, while intending to vote against the bill on the floor; an admission that he knew it would pass the House over his “no” vote. In other words, he knew when he posted this Tweet on July 16 that if the long-shot 10% cut failed on the floor (which it did), the budget for the full amount that he just approved in committee would pass (which it did). Secondly, since Khanna and his “progressive” colleagues voted FOR the House Defense Budget in the HASC for at least the past two years, it’s simply false that he has “voted against the House Defense Budget every time.”

A few days later, Khanna sternly condemned what he had just voted for and asked for a remedy that would now be only an extreme long shot:

Our military budget has gone up by $130 billion since Obama left office.

Now the U.S. spends as much on our military as the next 10 countries combined while millions are unemployed.

Here's an idea: cut 10% from the military budget and invest in clean tech jobs across America.

This is not unlike a physician knowingly prescribing a harmful medication to a patient and then castigating him for taking it. When the 10% cut predictably failed on the floor, Khanna expressed “disgust” at House Democrats who voted against it, as reported by Common Dreams. The article was prominently headed with the following admonishment from Khanna :

“‘I don’t want to hear anyone tell me that we can’t afford to expand enhanced unemployment benefits when we spend more on endless wars than the next ten countries combined,’ said Rep. Ro Khanna.”

Yet Khanna had just voted for precisely this amount of endless-war spending in the HASC.

Thus, in both past years, we have the Democratic members of the HASC to thank for Trump’s profligate squandering of taxpayer funds on the military-industrial complex. The previous year’s enthusiastic, unanimous endorsement of Trump’s budget by the Democratic-majority HASC contained this combat-hungry gem that a jarhead would love:

“.. the committee encourages the Department of Defense to conduct realistic war games and exercises that accurately reflect the potential threats and limitations of the joint logistics enterprise and encourages continued investment in its logistics enterprise as an enabler of power projection and sustainment operations against strategic competitors.”

One might try to defend Khanna and other “progressives” who lick Trump’s jackboots in the HASC on the basis that they are under pressure from Democratic Party bosses to vote “yes” in committee. If that is the case, it just shows that the Democratic Party has become the party of war and is fully enabling Trump and the GOP to squander Americans’ tax dollars on militarism, in contradiction with their usual antiwar and pro-worker rhetoric. However, were “progressive” HASC members really antiwar, they would dig in their heels for reductions and oppose the bill’s advance to the floor with their votes if the reductions don’t pass, just as GOP members vote against a Pentagon budget whose details they don’t like. If Dem leaders then stripped progressives of their appointments in retaliation, this would shine a light on the duplicity of party bosses and would thereby serve the progressives’ stated cause. It certainly doesn’t serve any progressive’s cause to vote in committee for a massive war budget and then complain about it in public after it’s too late to fix. On the contrary, elevating Trump’s excessive military budgets goes way beyond self-serving political opportunism to underhanded collaboration with a deadly enemy – Trump and his shredding of the Constitution and of hope for peace.

Ruth E. Kastner, Ph.D. is by profession a researcher and author in Philosophy of Science (physics). She also keeps tabs on the actions (not just words) of politicians, and advocates progressive and antiwar causes. Her websites are ruthekastner.org and transactionalinterpretation.org.