In my previous column, I presented the following challenge to my pro-war readers:

“…make a comparable list of pre-Iraq war news that is now nonexistent because of the war on Iraq. I imagine this is an insurmountable task. If you send me ‘Saddam is a tyrant no more’ stories, you better send me ALL the other tyrant stories in the world, and start screaming for perpetual war.”

Not surprisingly, the task was as I labeled it: “insurmountable,” for I received no responses. The silence surely doesn’t hurt my thesis, again confirmed by recent news:

The U.S. Senate voted on Wednesday to make President Bush get congressional approval before developing new classes of smaller nuclear weapons, but backed the repeal of a decade-long ban on their study and development.

The current acquiescence in Congress lends doubt to this promise of suitable Congressional oversight and approval before any nuke production begins. But don’t fret, the nukes aren’t that powerful:

The low-yield weapons would have one-third or less of the force of the bomb dropped on Hiroshima in World War II, which killed more than 100,000 people.

By my estimates, these new and more benign nukes have the capability of killing “only” 33,333 individuals. Thank goodness, cause that is just below 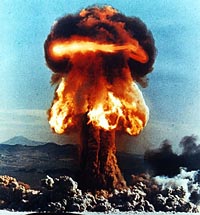 the threshold for calling it a “weapon of mass destruction.”

President Bush once believed that nukes were to be kept at a minimum:

Bush said he wanted to reduce the size of the US nuclear arsenal to the “lowest possible number consistent with our national security” and below the levels called for under the Start II accord with Russia.

I need not delve into the obvious hypocrisy of American development and research of mini-nukes. This change is but another indication of the emptiness of claims that the war was fought to destroy “arsenals of evil.” Clearly, it is more about who has the weapons, rather than a question of their very existence.

Now what does this change in policy have to do with the war on Iraq? Everything!

Their victory complete in both Iraq and within the White House policy debates, the neocons now allegedly have justification for their interventionist plans. Their policy goes something like this: if you are an undemocratic regime, we reserve the right to overthrow you, granted you don’t have nukes. Now, if you do, we reserve the right to contain you (North Korea) or make friends with you (Pakistan).

A quick glance at the “Who’s Free Index” records forty three nations labeled “not free” (presumably also undemocratic). The number on the list capable of producing or purchasing WMD certainly isn’t nil, presenting a difficult and lengthy mission for those calling for regime change.

The result of such a policy is quite clear: it provides rogue nations with the incentive to build nukes in the hopes of avoiding military confrontation with the US. Faced with imminent invasion, unfriendly regimes have found it necessary to make their production of weapons better protected and more hidden, perhaps only penetrable by nuclear weapons. Unmistakably, the neocons’ foreign policy begat their current demand for mini-nukes.

Sec. Rumsfeld appears to agree. He insists the nukes serve a military purpose because they “could be used to destroy weapons facilities that some countries are burying underground.” So now our $400 billion military doesn’t know how to get a shovel and dig? What about those daisy cutters and MOABS, which make the lethalness of America’s weapon arsenal second to none? Nevermind….

The mini-nukes also serve to speciously lower the costs of war. For instance, suppose that the military drops one on a site suspected of harboring terrorists or WMD. Given the “controlled” nature of these weapons, the American public may not comprehend the full effects of such actions, and thus just pass it off as a necessary (but evil) requisite of the War on Terror (i.e. “We have to lower to the terrorists’ level to win.”). Clearly, the public’s tolerance for unilateral and illegal actions by the administration has increased since 9/11 and alarm certainly won’t be generated by Bush’s Amen Corner, the mainstream media.

Also, these nukes require less American money, troops and time: the perfect recipe for selling a military intervention. This cost calculation of course disregards the environmental, political and moral ramifications of a new nuclear era. Undoubtedly, while we nuke the foxholes of the “evildoers,” the administration will be further contradicting its rhetoric, ultimately enervating any chance for peace and security in my lifetime.