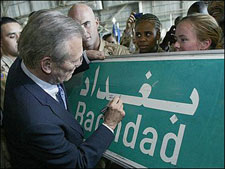 In addition to scientific studies, there is ample evidence that politicians lie, prevaricate and steal. Paul Bremer, the new civil administrator of Iraq, is no exception. Consider the following: in an about-face, America decided Iraq was not yet ready for self-rule, reneging on their promise for a quick transition to an independent Iraq. This announcement from an administration that justified the war by calling it an act of “liberation.” Nevermind the missing weapons of mass destruction or al-Qaeda links, America saved the Iraqis, ameliorated their woes and freed them from a ruthless dictator! However, there was an important qualification to this all “freedom”: it’s on Bremer’s timetable:

“We’re talking now like sometime in July to get a national conference put together,” Bremer… told reporters while attending the opening of an Iraqi jail. “I don’t think it will be in June.”

An Iraqi citizen voiced his concern and confusion:

“Why this postponement?” said Yadullah Jani Ulfat, a member of the Patriotic Union of Kurdistan. “This procrastination just means they’re trying to form a government of parties that are in complete line with their own policies.”

You hit the nail on the head, Yadullah! I couldn’t have said it any better!

Even now, as the sanctions have been lifted by the UN, the Iraqis still aren’t in control, for the resolution also “empower[s] the United States and Britain to govern Iraq and use its oil wealth to rebuild the country.” Someone has to be control, right?

guns), the Iraqis will find themselves ruled by a American puppet-state reminiscent of the those in the former Soviet sphere-of-influence. This puppet most likely will perform the following functions:

Here it is, liberation Bush-style: “Give us your guns and your most valuable resource, and trust us. You are not ready for democracy and we are not phased by your protests. They tried that in America, and look where it got them . . . nowhere!”

Perhaps, as many contend, the Iraqis are not “ready for democracy.” It is equally likely of course, that America – the party responsible for much the chaos in Iraq –: is itself not ready to export it.