Lithuania is trying to create new "facts on the ground," hoping to provoke the kind of response from Russia that will determine tone and substance of the important NATO summit scheduled for June 28-30 in Madrid.

On June 17 the Lithuanians announced they were banning the rail transit of goods through Lithuania to the Russian exclave of Kaliningrad. The ban went into effect on June 18. Sandwiched between EU and NATO members Poland and Lithuania, Kaliningrad receives supplies from Russia via rail and gas pipelines through Lithuania including goods sanctioned by the EU. 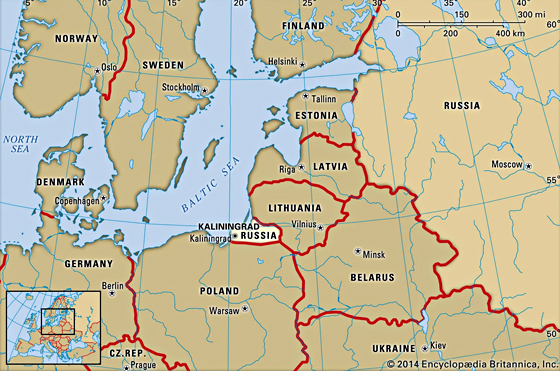 "This decision is really unprecedented. It’s a violation of everything. We consider this illegal. The situation is more than serious … We need a serious in-depth analysis in order to work out our response."

This is just the latest divisive issue. Indeed, the Madrid summit is scheduled at such an inauspicious time that former U.S. Ambassador to NATO, Robert Hunter, says it should be postponed, since it "risks creating serious problems when the alliance can least afford them." (Hunter is the kind of highly experienced diplomat for which the Blinken-Sullivan twins have no use. They will, of course, go ahead and add the coming summit to their distinctive diplomatic achievements.)

It is still not possible, a week before the summit, to forecast whether (1) it will take shape as the usual lemming-like performance by NATO bloc heads, jumping (this time off the cliff) to the US tune, or (2) whether to expect some unaccustomed fireworks from more seasoned lemmings, who squint at disaster ahead for Europe, if the dance in Ukraine does not end soon.

Stopping the music, of course, would require painful concessions, as well as putting the usual arms-makers on a reduced diet. NATO leaders will be convening just as Russia consolidates it’s hold on the Donbass. Lemmings normally cannot read tea leaves, though, and it seems a safe bet that the Germans and the French will do little more than frown at the Lithuanians and similarly bellicose Poles, and kowtow to Washington’s plan for the NATO agenda.

Professor John Mearsheimer recently addressed the seemingly innate inability of German and French leaders to stand up to US presidents. In a speech on Ukraine, Mearsheimer noted that Germany’s Angela Merkel and France’s Nicolas Sarkozy, lacked the courage to stand up to President George W. Bush as he pressed for NATO membership for Ukraine 14 years ago.

Both Merkel and Sarkozy were dead-set against inviting Ukraine (and Georgia) into NATO at the Bucharist summit in April 2008, but, as Mearsheimer indelicately put it, "They caved big time; they always do." The eventual NATO declaration stated "Ukraine and Georgia shall become members of NATO." Mearsheimer recalled that Merkel was quoted as saying that "Putin will see this as a declaration of war." It seems a safe bet that Scholz and Macron will take the lemming route and jump when the US says jump. I wish the following quip were more funny that it actually is in present circumstances:

"Two lemmings are chatting while standing in the line to the cliff. One says to the other, ‘Of course we have to go over the edge. Anything else would dishonor all the lemmings that have gone before us.’"

In the less likely event the Germans and French summon the courage to resist US, Lithuanian, and Polish pressure to up the ante in Ukraine, the meeting this June could be a benchmark for the unraveling of NATO (even as it, presumably, adds Finland and Sweden) under the impact of the severe economic damage the sanctions are just beginning to inflict on Europe. Adding the two Nordic nations may come to be seen as high irony as the last new passengers on a foundering NATO boat. (Ukraine is not likely to find its passenger ticket amid the current turmoil.)

At the historic NATO summit in July 1997, when the NATO welched on the US promise, given to Russian leader Mikhail Gorbachev in Feb. 1990, not to move NATO "one inch" toward Russia, NATO voted to admit the Czech Republic, Hungary, and Poland. Ironically, that summit was also held in Madrid.

… and Moving the Atlantic to Far East

According to the current US Ambassador to NATO, Julianne Smith, a new NATO strategic concept document to be released in Spain will include the first mention of the "threat" from China in a NATO strategic concept, although a statement released in June 2021 after an alliance summit in Brussels said that China’s "growing influence and international policies can present challenges that we need to address together as an alliance."

Ambassador Smith also announced that NATO has invited leaders from Australia, New Zealand, Japan, and South Korea to attend the summit in Madrid. A full deck. Smith added that NATO leaders are also expected to address cooperation between Russia and China and how it affects the alliance. In my view, they would be well advised to spend the lion’s share of the time discussing what have become, under the impact of the war in Ukraine, the implications of the new bi-polar world: NATO on the one side, and Russia, China, and most of the rest of the world on the other.