WikiLeaks founder Julian Assange is the personification, as well as a harbinger of press freedom in its death throes, with democracy inexorably following – as night the day.

Our founders were justly proud of the First Amendment provision that "Congress shall make no law abridging the freedom of speech or of the press". Their successors today seem equally proud of flushing that down the toilet, lest truly free journalism expose and document U.S. war crimes. For that is what Julian Assange did, before the U.S. and the UK, with help from vassal Sweden succeeded in corralling him and eventually putting him behind bars.

The judicial charade moves along slowly (See: "Assange To Be ‘Moved Around’ Sine Die" – counted in months and years, not days. 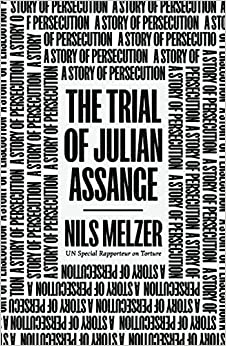 To his credit, Nils Melzer, UN Rapporteur for Torture, undertook his own investigation of the original allegations against Julian Assange and was able to use his fluency in Swedish to expose the dirty game played by the Swedish police to enable the nabbing of Assange, who has been deprived of his freedom for more than a decade now. Melzer provides a wealth of detail in his recent book, The Trial of Julian Assange: A Story of Persecution. It is a gripping read; what follows by no means scoops it.

As early as Jan. 2021, in a Zoom presentation, Melzer revealed many of the aspects of the sordid story of how they "got" Julian. What follows is what he said:

I will go into two points more specifically, because they have been very prominent in destroying the reputation of Julian Assange. And the first thing I started out with really was the rape allegation in Sweden. Why was that so important? It is because well, first of all, obviously, rape is a grave crime. And so we need to, you know, take it seriously and look at those allegations. The second thing is, this was the turning point. [Emphasis added.]

These allegations were made in August 2010, just about three weeks after the big Afghanistan War diary was published by WikiLeaks… the biggest military leak in US history. And this was the turning point at which a success story (where I found he became more and more famous and celebrated for informing the world about the dirty secrets of states) turned, and it became a story of persecution. From that point on it was basically downhill for Julian Assange.

And so I really wanted to go back to that story, and look into this. And I was able to do that perhaps better than others, because part of my family is Swedish…so I actually speak the language and I was able to read a lot of original police documents and proceedings that are not accessible in the English language. And what I found was quite shocking. I found that Julian Assange had been in Sweden for a conference and he had had sexual contact with two women. And this is not contested on both sides, but it was consensual. And so that did happen.

In both cases, the women ended up having unprotected sex with Julian; the circumstances under which that happened are contested. But they did go to the police, both of them, these women, who knew each other, they went to the police, not because they wanted to report a crime, but because they were worried to have contracted HIV. And they wanted him to take an HIV test. And, and he had just said, well, I’ve taken one, so it’s fine, you don’t have to worry about it, I don’t have time.

The two women took it much more seriously, obviously, and wanted to push him and went to the police to ask whether they could force him to take an HIV test. That is very clearly documented in text messages that are available, that these women wrote to each other at the time and to friends by email.

That is the only reason they went to the police. And we can also see that the police immediately turned it around and said, "well, this is really about rape." And the women didn’t agree with that but they were informed that this was not up to them, that the state has an obligation to prosecute rape, and that they were going to make a rape allegation out of the rape investigation.

From that point on, you can see text messages between those women where they’re extremely stressed and say, well, we didn’t want this, we didn’t intend to do this, the police started it all, we didn’t want to be part of this, but now we have no choice. And so, what we can see is… that this doesn’t fit with the story that was spread by the authorities of women going to the police and complaining about rape. It looks much more like the police taking a case that had nothing to do with rape initially, but with unprotected intercourse, and potential HIV infection, and turning it around to use it to their advantage, which was to portray Assange as a suspected rapist.

Now, why would they do that? Sweden is a close ally of the US in Afghanistan, as is Britain, as are other countries and they all have been exposed by WikiLeaks. We should not make any mistake about this, established governments don’t like WikiLeaks, because it threatens their way of operating where they can basically do their business in secret and, very often, unfortunately, behind the backs of Parliament’s and even the public of their own countries. And when we see the types of things that that WikiLeaks published, it really embarrassed all these governments and, not only embarrassed them, but even brought evidence for war crimes and very serious cases of corruption and, and human rights violations.

Nils Melzer is a Swiss professor of law. As rapporteur for torture, it’s his duty to investigate any allegations of torture that bear some sort of credibility. He ran into serious problems trying to see whether Julian Assange, for example, had been treated fairly or had been tortured. He brought a psychiatrist and another specialist with him into Belmarsh prison about three years ago. They did a diagnosis, and found Julian to be a victim of psychological torture, pure and simple. All the earmarks were there.

Now, it had taken Nils Melzer a little while to pick up this case. And he explained this in an op-ed that he wrote – published only in The Medium. He couldn’t get it published in any major media – even though he is THE UN Special Rapporteur on torture, and even though he wrote on the occasion of the International Day in Support of Torture Victims, June 26, 2019.

This is how he starts out, setting the stage. He writes, "I know, you may think I’m deluded, how could life in an embassy with a cat and a skateboard ever amount to torture? That’s exactly what I thought too when Assange first appealed to my office for protection. Like most of the public, I’d been subconsciously poisoned by a relentless smear campaign." In the end, says Nils Melzer, "it finally dawned upon me that I had been blinded by our propaganda, and that Assange had been systematically slandered to divert attention from the crimes he exposed." [Emphasis added.] Melzer finishes up by saying, look… "this is about a bigger issue than protecting Julian Assange, however important that is, it’s letting a precedent be created, making telling the truth of crime, while the powerful, enjoy impunity. Now, if this is allowed to continue, we will have surrendered our voice to censorship and our fate to unrestrained tyranny."

As noted above, Melzer couldn’t get his op-ed published elsewhere. He says right up front that he sent it to The Guardian, The Times, The Financial Times, The Sydney Morning Herald, the Australian, The Canberra Times, The Telegraph, The New York Times, The Washington Post, Reuters and, Newsweek; all of them turned him down.

So much for freedom of the press.