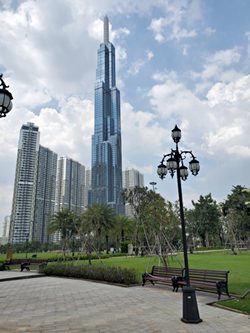 Forty-five years after the last US forces pulled out, Vietnam’s economy is thriving. The nominally Marxist nation is home to a privately built 81-story skyscraper in Ho Chi Minh City, a Cancun-like string of resort hotels in Da Nang and a raucous nightlife in Hanoi’s Old Quarter.

In the years immediately after Saigon’s fall, things did not seem so promising. Vietnam fought wars with China and Cambodia, confined many South Vietnamese regime supporters in reeducation camps and suffered an exodus of "boat people" seeking better lives in the West.

But in the 1990s, the country opened up and its rapid economic growth commenced. Today, conditions in Vietnam remain far from perfect. Freedom of expression is severely restricted and many people from poorer provinces continue to emigrate in search of a better life: a fact made painfully obvious by the horrible deaths of Vietnamese in the back of a truck bound for the UK. But World Bank figures show a 27-fold increase in the country’s per capita GDP since 1990, suggesting that things are rapidly heading in the right direction.

A key milestone for Vietnam was the restoration of diplomatic and trade relations with the United States under President Bill Clinton in 1995, with Vietnam veterans John McCain and John Kerry providing Congressional support.

Today, an American visitor from Vietnam faces no hostility whatsoever despite the millions of deaths the nation suffered during what they call the American War. Indeed, the country is still home to many victims of the defoliant Agent Orange, spread by US planes in a vain attempt to defeat Vietcong rebels.

A visitor to museums in Vietnam is reminded of the reasons for the war from the other side’s perspective. Vietnam has spent centuries fighting foreign intervention, first from China, then from France and finally from the United States. One learns, for example, that the infamous Hanoi Hilton that hosted John McCain and other US POWs began as a French-built prison whose purpose in the early 20th century was to confine and sometimes torture Vietnamese independence activists.

America’s experience in Vietnam offers lessons for how we should think about and relate to other "recalcitrant" countries like Cuba and Iran. Both these nations suffer under poor governance, but domestic opposition to their current rulers is muted by fears of, and resentment toward, US Intervention. After all, both countries experienced US-imposed governments that trampled on human rights in living memory: Batista in Cuba until 1959 and the Shah in Iran until 1979.

People in both countries are aware that the US government would like to replace their regimes and that recent US regime change operations in Iraq, Libya and Syria have not yielded good results. It should be understandable why they might prefer the domestic devils they know to the foreign ones they don’t.

President Obama understood these concerns and began implementing policies toward those countries that followed the Vietnam template: lower hostility, seek opportunities for agreement and increase trade. Unfortunately, these enlightened policies have been reversed by the Trump Administration.

While they won’t topple the Cuban or Iranian regimes immediately, commerce and other people-to-people interactions will gradually transform these countries to make them more affluent, more open and more friendly to Americans. Increased trade and tourism as well as cooperation between non-profits and more opportunities for their citizens to study and work in the US will increase awareness in these nations of the benefits of Western institutions and the desire to implement them.

Today, Vietnam is far from a liberal democracy with adequate human rights. But it is on a trajectory like the one followed by South Korea and Taiwan. In those countries, greater economic freedom and prosperity were followed by increased civil liberties. Like Vietnam, both of those nations also benefited from people-to-people engagement from the US. Let’s apply this lesson to Cuba, Iran and other societies struggling with isolation.

Marc Joffe is Senior Policy Analyst at the Reason Foundation.