While the American people pine for peace, our leaders are intent on war: that’s the anomaly of American "democracy," one that speaks ill of the effort to export our system at gunpoint. Adopt "democracy," and you, too, can be ruled by a warmongering oligarchy.

Americans oppose an attack on Iran 2-to-1. By almost every measure, they want negotiations, rather than confrontation, with Tehran. Yet the House Foreign Affairs Committee recently gave its approval to a bill that, in effect, would fire the first shot at the Iranians, imposing draconian sanctions similar to those enacted against Iraq in the run-up to the invasion and occupation of that country. Similarly, this new sanctions regime sets the stage for the coming war with Iran.

The Iran Counter-Proliferation Act [.pdf], so-called, doesn’t bother targeting goods and services that Iran might put to military use. Instead, it takes a broad-brush approach and openly seeks to strangle Iran economically. The legislation, written by champion warmonger Tom Lantos, would prohibit the import of any and all items from Iran, ban dealings with Iranian banks, stop the export of items having to do with civil aviation, and ratchet up the pressure on other countries to impose similar restrictions. Furthermore, Lantos wants a report from the White House every six months on the "progress" being made to tighten the chokehold on Iran. 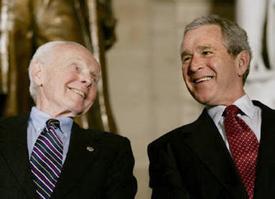 Looking at this from the Iranian side, it is clearly an act of war, especially in the context of the Iran Freedom and Support Act, which provided millions to fund "regime change" in the land of the mullahs The Lantos bill is a naked provocation that stops just short of an all-out attack – and paves the way for military action, in spite of a proviso that reads "Nothing in this Act shall be construed as authorizing the use of force or the use of the United States Armed Forces against Iran." Having already declared our intention to bring down the regime by funding opposition groups, this latest vow by the U.S. Congress to destroy the Iranian economy is the equivalent of the Wicked Witch of the West skywriting "Surrender Dorothy" in the skies above Tehran.

With Lantos and the anti-Iran Democrats leading the charge on the political front, the Bush administration is moving on the military front. Recent developments are ominous: namely, the addition of another aircraft carrier, the USS Enterprise, to the two already looming off the Iranian coast. (Yes, I know that last link is to Debka.com, hardly a fountainhead of journalistic accuracy, but this Newsweek report prefigured it.) What amounts to a Republican–Democratic pincer movement is evidence that a real consensus has developed in our nation’s capital that war with Iran is inevitable.

True, there are some minor disagreements along the way, with the Democrats, led by the sickening hypocrite Lantos, demanding these draconian sanctions, and the White House opposing them on the grounds that new sanctions undermine our multilateral diplomatic effort to isolate Tehran. Lantos, that pious old fraud, inserted language in his bill that pays minimal lip service to the idea of resolving this dispute through diplomacy – while the rest of his bill is clearly designed to sink diplomatic initiatives that are bound to run aground on the rocks of sanctions.

Lantos really is a piece of work. Here he is insulting Jacques Chirac and calling former German Chancellor Gerhard Schroeder a "political prostitute" for having the foresight to oppose our disastrous Iraqi adventure. Of Schroeder, Lantos barked:

"I referred to him as a political prostitute, now that he’s taking big checks from [Russian President Vladimir] Putin. But the sex workers in my district objected, so I will no longer use that phrase."

The respectful use of the term "sex workers" indicates Lantos really has no moral objections to prostitution, he merely objects to the nationality of Schroeder’s customers. Yet Schroeder’s employment in an oil-gas venture that is 51 percent owned by Gazprom no more makes Schroeder a Russian prostitute than big campaign contributions to Lantos from the Washington PAC make him a whore for Israel. Presumably, Schroeder believes trade with Russia is in Germany’s (and Europe’s) interests, just as Lantos thinks America’s current policy of unconditional support for Israel is good for America.

As for Chirac, Lantos was at his most bombastic. The former French president, said Lantos,

"should go down to the Normandy beaches. He should see those endless rows of white marble crosses and stars of David representing young Americans who gave their lives for the freedom of France."

Lantos should go down to Walter Reed Army Hospital and see those endless rows of wounded soldiers maimed in an unwinnable, futile war that he voted to authorize and continues to support. He should go visit this guy and come back and tell us that he was right about Iraq, just as he is about Iran.

The coming war with Iran is brought to you by the Dick Cheney wing of the Democratic Party, in collaboration, of course, with the Dick Cheney wing of the GOP. With Lantos one of their chief spokesmen and Hillary Clinton their designated presidential candidate, the Demo-Cheneyites are determined to pull off what their Republican counterparts lack the political capital to accomplish. If the shooting starts under Bush’s watch – as is very likely – then the Democrats can blame the Republicans even as they pave the way for war politically, diplomatically, and in every other way possible.

As the Democratic presidential candidates dither over Iraq, pretending to oppose the war while continuing the funding without conditions or meaningful oversight, they all agree that a U.S. attack on Iran is "on the table" as long as Tehran maintains its right to develop nuclear power for ostensibly peaceful purposes. Furthermore, the Iraq war and the looming possibility of a conflict with Iran are no longer separable. As I have said numerous times in this space, the Iraq war cannot be contained within Iraq’s borders, and the "spillover effect" is bound to result in a border incident that could spark a wider conflict. As Rep. Ron Paul has warned, a Gulf-of-Tonkin-like incident in the Persian Gulf or on the Iran-Iraq border could easily be manufactured by an administration hell-bent on war – and perhaps we are seeing the first signs of it here.

The conflict, once initiated, will not be restricted to the Persian Gulf region and the long Iran-Iraq border but will break out all over the Middle East, erupting in Lebanon and rippling outward all the way to Pakistan in a seismic wave that could topple every regime in the region. In this way, the administration’s goal of "regime change" throughout the Middle East will be accomplished and the neocons’ "domino theory" confirmed – albeit not in a way they ever intended.

You’ll note that the White House and its pet generals are nowadays referring to the Iraqi insurgency as "al-Qaeda," a neat rhetorical sleight-of-hand that prefigures what may happen once a regional war – the neocons’ vaunted "World War IV" – gets started: the ultimate empowerment of America’s deadliest enemies. With a pro-al-Qaeda regime ensconced in Islamabad, the prospect of nuclear-armed terrorists – the ultimate bogeyman conjured up by the War Party – will become a self-fulfilling prophecy.

In the end, we are confronted with the utter craziness of the War Party and its agenda in the Middle East. This pathological condition was recently reconfirmed by Johann Hari’s account of a National Review-sponsored cruise to Puerto Vallarta featuring Norman Podhoretz and Bill Buckley, along with a boatload of neocons and well-heeled red-state-fascist types on board. The Pod Man and Buckley nearly came to blows over the war question, when Buckley asked Poddy if it didn’t bother him that the famed "weapons of mass destruction" were nowhere to be found in Iraq. “There were WMD, and they were shipped to Syria," snapped the Pod Man.

Syria? Is he serious? I’m afraid he is…

Continuing his rant, the Pod Man avers: "This picture of a country in total chaos with no security is false. It has been a triumph. It couldn’t have gone better.”

Better – for whom? Well, for Israeli hardliners, to start with, who now have 150,000 American soldiers in the Middle East to set against another of their mortal enemies. Better for the neocons, who still control the commanding heights of U.S. policymaking centers in Washington and who are now within reach of their goal of "regime change" throughout the region. As for the rest of us, including poor Buckley, who’s had his own magazine (and movement) hijacked by the Pod Man and the neocon pod-people – “I have lots of ex-friends on the left; it looks like I’m going to have some ex-friends on the right, too” – if you’re sick of war, you’re no friend of the Pod Man’s. If you’re sick of the Pod Man – who is engaged in a friendly competition with Joshua Muravchik for the title of warmonger-in-chief of the bomb-Iran crowd – then get in line, because even the most hard-core conservatives, who once supported the president’s relentless policy of aggression in the Middle East, are now having second thoughts.

Buckley’s face-off with Podhoretz dramatizes, in concentrated form, the slow burn of Republican members of Congress who fear for their seats and the future of the GOP as the neocons drag them down to political oblivion. How long will Republicans, and conservatives in general, consent to carry the millstone of neoconservatism around their necks?

Make no mistake about it: we are headed straight for another war in the Middle East, and it is going to be a doozy. The Democrats will protest that they never wanted it, even as they facilitate the war plans of this administration to the nth degree. Don’t dare imagine that a change of administrations will avert the coming war with Iran: a Democratic administration in power will just mean that we’ll have Cheneyism without Cheney, at least when it comes to Iran.

The Iranians claim they aren’t building weapons, only developing nuclear power for peaceful purposes because they want to export more of their oil. Yet who could blame them if they were building nukes – after being denounced as the main spoke on the "axis of evil" by the president of the United States and threatened with a heavy U.S. military buildup in Iraq and the Gulf? They once did offer to negotiate over not only their nuclear program but also their support for Hezbollah and radical Palestinian factions – but this offer was rudely rejected at the behest of Cheney and his cohorts. This offer should be reexamined and revived: it could and should provide the basis for a negotiated settlement of all outstanding issues between Washington and Tehran.

The United States lived with Soviet nukes aimed at American cities for 50-plus years: we can live with Iranian nukes aimed at Israeli cities (and Israeli nukes targeting Iranian cities). The alternative is war – and a regional conflagration that will have economic and geopolitical consequences that can only be catastrophic for America.