Besides revealing how the Truman White House and military sabotaged the first movie about the atomic bomb, from MGM, my new book, The Beginning or the End explores other key nuclear-related events of that crucial year of 1946. Among the most important: the start of U.S. nuclear blasts in the Pacific, which would fuel the coming arms race even as it imperiled natives, witnesses, sailors and others thousands of miles away with the radioactive fallout they produced. Here is an excerpt on the evil US military plans for moving the natives of Bikini to a far harsher new home in advance of the first test, which was set off 74 years ago next week.

The US had asked the 167 inhabitants of the Bikini atoll (made up of some 23 tiny islands) in Micronesia to “temporarily” relocate so that America could set up new and devastatingly powerful weapons for “the good of mankind and to end all world wars.” The first test was planned for late spring or early summer of 1946. It called for a weapon exceeding 21 kilotons in force (where the Hiroshima blast was 15 kilotons) to be dropped over dozens of unoccupied junked ships in the Bikini lagoon to judge the effects on that fleet. The second test would be set off in the same area under water, beneath another ghost fleet, by remote control. Journalists and film crew started signing up in vast numbers to witness all this. 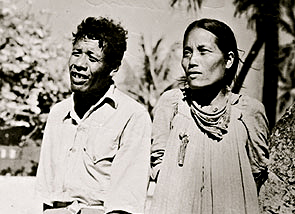 The Bikini islanders learned of their forced evacuation when Navy Commodore Ben Wyatt, military governor of the Marshall Islands, arrived to remind them of Biblical passages – they had long welcomed Protestant missionaries – comparing them to “the children of Israel whom the Lord saved from their enemy and led into the Promised Land.” The Bikinians were none too pleased with this notion, but their leader, King Juda finally agreed to the relocation request, announcing “We will go, believing that everything is in the hands of God.” 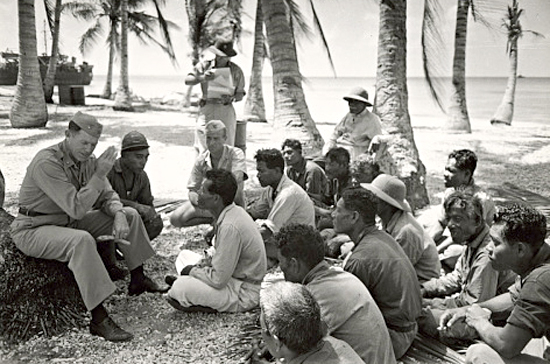 Wyatt staged a reenactment of this meeting for a newsreel but it required seven retakes because King Juda failed to act enthusiastic enough.

Of the eleven heads of extended Bikini families, nine chose Rongerik, 125 miles to the east – about one-sixth the size of their current island – as their temporary home.

In reality, Wyatt and other US officials knew that the islanders would never be allowed to return to what was certain to be a heavily-contaminated former paradise. Time magazine quoted a US officer as boasting that easing the Bikinians out was “one hell of a good sales job.” The magazine writer added: “Progress chuckled over a victory.”

The US Navy would help the Bikinians to disassemble their meeting house and church while the residents packed supplies and personal belongings, then transported them to Rongerik in landing craft. Time observed that they took few possessions with them beyond their bibles, hymnals and furniture brought by missionaries, along with “latent syphilis left by Yankee whalers of the pre-atomic age.”

No one lived on Rongerik, which was helpful, but the reason for that was not: It had few supplies of food and fresh water. The Navy knew of the challenges the Bikinians would face there, but still left them with only a few weeks of water and food. Time predicted that to convince them not to flee back home after the tests the Navy might have to fly their leader King Juda over Bikini to show him what a tragic wasteland it had become.

As the planned July 1 date for the first test neared, few back in the US cared what happened to the Bikinian natives, but some worried the blast might ignite the atmosphere, trigger tidal waves or create a fissure in the earth’s crust. Newspapers carried witty accounts of Los Angeles residents planning to enjoy picnics high in the hills on the day of the blast instead of by the beach in case a tsunami rose from the ocean. 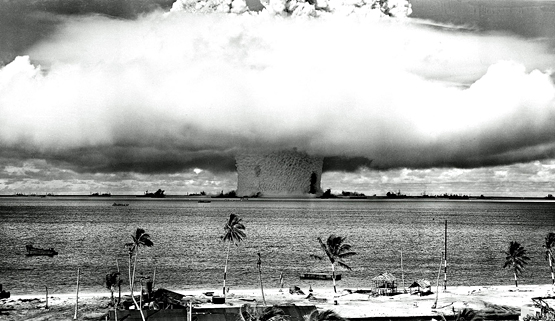 None of that happened, of course, when the test went off on July 1. Many in the press, from a distant vantage point, were disappointed that the mushroom cloud seemed not so large and most of the ships did not immediately sink. One witness, renowned Saturday Review editor Norman Cousins, would title his report in the Saturday Review, “The Standardization of Catastrophe.” Too many Bikini observers felt the bomb had been “oversold,” that it was “merely” another weapon of war. Its “novelty” had passed. Cousins reminded his readers that too little attention was focused on radiation effects – and on the fact that bombs many times more powerful would be created in years to come.

The first one hundred natives among those forced out of the Bikini Atoll for the bomb tests could not return to their contaminated paradise until 1970. Ten years later, however, they were forced to evacuate again after high levels of Strontium-90 was discovered in their well water and Cessium-137 in their blood. Only scientists, divers and the occasional tourist would visit in the decades that followed.

Greg Mitchell has written a dozen books, with his latest to be published July 7, The Beginning or the End: How Hollywood – and America – Learned to Stop Worrying and Love the Bomb (The New Press).