The collective shrieking and caterwauling has been loud and continuous. How dare these two scholars – John Mearsheimer from the University of Chicago and Stephen Walt from the Kennedy School of Government – suggest that U.S. support for the state of Israel reflects something more than simple American national interest! The outrage. 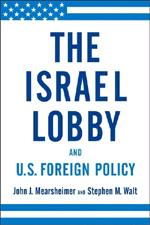 All of the usual epithets and insults have been hurled. Even if Mearsheimer and Walt aren’t themselves virulent anti-semites, critics assure us, their depiction of a strong political lobby advancing the cause of Israel is in the long tradition of anti-semitism, a slightly sanitized version of the “The Protocols of the Elders of Zion,” say. Certainly the argument should not be heard: Speaking invitations have been cancelled and leaders of organizations that lobby on behalf of Israel have rushed out to deny that Israel has a lobby.

The Israel Lobby and U.S. Foreign Policy is particularly important precisely because it addresses one of the third rails of American politics: unconditional support for one small, distant country largely irrespective of American national interests. Mearsheimer and Walt have articulated what everyone in Washington knows – touch the third rail and you die, politically or professionally. They write:

"It is difficult to talk about the lobby’s influence on American foreign policy, at least in the mainstream media in the United States, without being accused of anti-Semitism or labeled a self-hating Jew. It is just as difficult to criticize Israeli policies or question U.S. support for Israel in polite company. America’s generous and unconditional support for Israel is rarely questioned, because groups in the lobby use their power to make sure that public discourse echoes its strategic and moral arguments for the special relationship."

This sustained effort to close off debate, to prevent the slightest criticism, is almost unique to Israel (and, ironically, is not so evident in Israel itself). Nowhere else is one’s head blown off for simply asking: is a particular foreign policy in America’s interest?

That partisans sometimes put ethnic preference above national interest is hardly news. America’s Armenian and Greek lobbies, for instance, have been pushing Congress to denounce Turkey over the Armenian genocide of nearly a century ago. It’s a bizarre spectacle, since it isn’t America’s business and there are no practical benefits to be gained approving such a resolution. But ethnic Armenians and Greeks are unconcerned about the impact of their ethnic preferences on U.S. foreign policy.

African-American legislators pushed the Clinton administration to invade Haiti. The U.S. had no policy reason to install a violent demagogue, Jean-Bertrand Aristide, as president (In fact, Washington forcibly removed him from power ten years later.) Rather, the administration acted in response to racial pressure, as well as in an attempt to make Washington appear even-handed, given its previous focus on European and oil-rich lands for rescue.

Moreover, NATO expansion was fueled by a gaggle of “hyphenated-Americans” who wanted America to protect their ancestral homes. Countries like Latvia, Poland, Hungary, and the Czech Republic are security black holes – they consume American defense resources while providing little in return. But Americans of various ethnicities pressed hard to extend Washington’s defense guarantee to these nations.

More recently, Ukrainian-Americans lobbied the U.S. government to intervene in Ukrainian politics on the side of the Ukrainian-speaking western section against the Russian-speaking eastern section. Most Ukrainian expatriates and descendants of expatriates in America come from the western part of the country, and they want the U.S. government to help “their” faction triumph in their ethnic homeland.

There’s nothing wrong with Americans lobbying on behalf of any of these causes. But it is important for the rest of us to realize that these groups were not, in the main, lobbying for America’s interest.

Again, this is nothing exceptional. When farmers descend upon Washington, they blather on about their great public purpose while mulcting the public. But no one, thankfully, believes them. They are lobbying to enrich themselves at the expense of their fellow citizens. Similarly, U.S. security was not the goal of Americans who pressed for action in Haiti and Ukraine and against Turkey, and to expand NATO to the borders of Russia.

Americans should be no less skeptical of their motives than of the motives of anyone else. Advocates of these positions may have believed that their policy proposals would not hurt U.S. security. They might even have deluded themselves into believing that advancing their particular ethnic ends would be good for America. But most of them were forthrightly advancing a foreign interest above America’s interest.

So it is with the “Israel Lobby.” No other country receives stronger backing in America from a lobby – in reality a loose in collection of lobbies, groups, and people. But from the America Israel Public Affairs Committee to “Christian Zionists,” there is a potent political movement pressing the U.S. government to support Israel in most every way at most every time simply because it is Israel.

As Mearsheimer and Walt point out, Israel is a strategic liability, not asset. Never has it provided significant assistance to America in an international crisis. Today it is the one nation upon which Washington cannot lean for assistance in the Middle East, because of the hostile reaction that would be generated among its neighbors.

At the same time, Israel is the one country that, no matter what it does, almost always involves the U.S. The attack on Lebanon last year, for instance, was viewed internationally as the responsibility of the U.S. as well as Israel because the former provides the latter financial subsidies, weapons sales, and diplomatic support. Similarly, no one would view an Israeli attack on Iran as anything other than a U.S.-backed attack on Iran.

Particularly important in a world of terrorism is Israel’s role as a Muslim grievance. Israel advocates bridle at anyone who points to evidence that the U.S. has made itself a target by becoming an accessory to Israel’s lengthy and brutal occupation of lands containing millions of Palestinians as well as its numerous wars against its Arab neighbors. Even if one is inclined to dismiss criticism of Israeli behavior, foreign policy should be made with a realistic appreciation of the consequences of different policies.

Observe Mearsheimer and Walt: “there is in fact abundant evidence that U.S. support for Israel encourages anti-Americanism throughout the Arab and Islamic world and has fueled the rage of anti-American terrorists. It is not their only grievance, of course, but it is a central one. … One need not agree with such sentiments to recognize how unquestioned support for Israel has fueled anger and resentment against the United States.”

Such anger and resentment would be more understandable to Americans if they were aware of the reality of life for Palestinians living under a system that essentially is a Mideast form of Apartheid backed by military rule. Mearsheimer and Walt point to policies which do no credit to Israel, appropriately praised as a liberal, democratic state surrounded by an amalgam of regimes varying in hostility and brutality. Indeed, in Israel there is sharp debate, far more serious and honest than in America, over treatment of the Palestinians.

Despite the strength of Mearsheimer’s and Walt’s arguments, there are still many issues over which even friends disagree. For instance, Dimitri Simes, head of the Nixon Center, believes the authors underestimate the fault of the Palestinian side in the collapse of the Oslo peace process. He also contends that they underestimate Arab provocations before the 1967 war.

Nevertheless, in the main The Israel Lobby holds up well. Perhaps the most serious attack on the book by those who shout in unison that there is no lobby is that most Americans support Israel for other reasons. That’s true to some degree, but the level of support in part reflects the truncated political debate which results in an environment in which criticism is often shouted down and treated as beyond the pale.

For instance, Americans who laud Israel’s commitment to democracy are likely to know little about Israel’s undemocratic practicees in the occupied territories. Americans who assume Israel’s strategic value are likely to have little awareness of Israeli spying on the U.S. or arms sales to U.S. adversaries.

Moreover, the Christian Zionist movement is largely disconnected from any sense of national interest or interest of non-Christians. Using junk theology, some Christian leaders argue that God has given the land to Israel, or that today’s nation state of Israel must expand before Jesus Christ can return. If anyone is subject to the claim of “dual loyalty,” it is Christians who are pushing the U.S. government to advance their theological ends, not Jewish Americans who at least attempt to articulate legitimate national interests.

The Israel Lobby is challenging, courageous, and provocative. There is much in it that is well worth reading, even as one finds oneself quibbling over a particular fact or interpretation.

Despite all of the bad news about U.S. policy which Mearsheimer and Walt deliver, they end on a positive note: “Because the costs of these failed policies are now so apparent, we have an opportunity for reflection and renewal.” Despite the continuing influence of those who prefer to stifle debate, “A country as rich and powerful as the United States can sustain flawed policies for quite some time, but reality cannot be ignored forever.”

We can only hope and pray that they are correct in this judgment. Changing policy appropriately would make the U.S., friendly Arab states, and Israel all better off.