If, like me, you have the unfortunate habit of pointing out the dishonesty of the cases made for various wars, and you begin to persuade people that the wars are not actually for the eradication of the weapons of mass destruction that they proliferate, or the elimination of the terrorists that they generate, or the spreading of the democracy that they stifle, most people will soon ask “Well, then, what are the wars for?”

At this point, there are two common mistakes. One is to suppose there’s a single answer. The other is to suppose that the answers must all make rational sense. A basic response that I’ve given a gazillion times is that wars are for profit and power and pipelines, for control of fossil fuels and territories and governments, for electoral calculations, career advancement, and media ratings, payback for campaign “contributions,” for the inertia of the current system, and for an insane, sadistic lust for power and xenophobic malevolence. 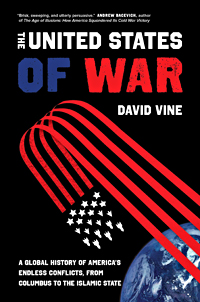 We know that wars do not correlate with population density or resource scarcity or any of the factors used by some in U.S. academia to try to pin the blame for wars on their victims. We know that wars hardly overlap at all with the locations of the manufacture of weapons. We know that wars do correlate strongly with the presence of fossil fuels. But they correlate with something else as well that provides a different sort of answer to the question of what the wars are for: bases. I mean, we’ve all known for decades now that the latest US permawars consist largely of coating various countries with bases, and that the goals include the maintenance of some number of permanent bases and oversized embassy-fortresses. But what if the wars are not only motivated by the goal of new bases, but also driven in significant part by the existence of current bases?

In his new book, The United States of War, David Vine cites research by the US Army showing that since the 1950s, a US military presence has correlated with the US military starting conflicts. Vine modifies a line from Field of Dreams to refer not to a baseball field but to bases: “If you build them, wars will come.” Vine also chronicles countless examples of wars begetting bases begetting wars begetting bases that not only beget yet more wars but also serve to justify the expense of more weapons and troops to fill the bases, while simultaneously producing blowback – all of which factors build momentum toward more wars.

Vine’s previous book was Base Nation: How US Military Bases Abroad Harm America and the World. This one’s full title is The United States of War: A Global History of America’s Endless Conflicts, From Columbus to the Islamic State. It’s not, however, a detailed account of every US war, which would require many thousands of pages. It’s also not a move away from the topic of bases. It’s a chronicle of the role bases have played and still play in the generation and conduct of wars.

There is, in the back of the book, a long list of US wars, and of other conflicts that for some reason are not labeled wars. It’s a list that rolls on steadily from before the beginning of the United States to today, and that doesn’t pretend the wars against Native Americans didn’t exist or weren’t foreign wars. It’s a list that shows distant wars around the globe long-predating the completion of “manifest destiny” to the US west coast, and shows small wars happening in numerous places at once and right through the occurrence of major wars elsewhere. It shows short wars and extremely long wars (such as a 36-year war against the Apache) that render obscene the constant announcements that the current war on Afghanistan is the longest US war ever, and that render ridiculous the idea that the past 19 years of war is something new and different. While the Congressional Research Service once claimed the United States had been at peace for 11 years of its existence, other scholars say the correct number of peaceful years is zero thus far.

The mini-U.S. suburban paradises sprinkled across the globe as military bases are gated communities on steroids (and Apartheid). Their residents are often immune from criminal prosecution for their actions outside the gates, while the locals are only admitted within to do the yard work and cleaning. The travel and conveniences are great perks for military recruits and for budget-controlling Congress members touring base world. But the notion that the bases serve a protective purpose, that they do the opposite of what Eisenhower warned of, is just about upside down from reality. One of the main products of US bases in other people’s countries is the bitter resentment that Vine reminds us pre-U.S. residents felt toward the British military occupation of North American colonies. Those British troops behaved lawlessly, and colonists registered just the sorts of complaints of looting, rape, and harassment that people who live near US bases have been lodging for many decades now.

US foreign bases, far from first sprouting up in 1898, were built by the budding new nation in Canada prior to the 1776 Declaration of Independence and grew rapidly from there. In the United States there are over 800 current or past military sites with the word “fort” in their names. They were military bases in foreign territory, as were countless other locations without “fort” in their current names. They preceded settler colonists. They provoked blowback. They generated wars. And those wars generated more bases, as the frontier was pushed ever outward. During the war for independence from Britain, as during most major wars that most people have heard of, the United States went right on waging numerous smaller wars, in this case against Native Americans in the Ohio Valley, western New York, and elsewhere. Where I live in Virginia, monuments and elementary schools and cities are named for people credited with expanding the US empire (and Virginia’s empire) westward during the “American Revolution.”

Neither base construction nor war-making has ever let up. For the War of 1812, when the US burned the Canadian Parliament, after which the British burned Washington, the US built defensive bases around Washington, D.C., that did not serve their purpose remotely as well as most US bases around the world do. The latter are designed for offense, not defense.

Ten days after the War of 1812 ended, the US Congress declared war on the North African state of Algiers. It was then, not in 1898, that the US Navy began establishing stations for its ships on five continents – which it used during the 19th century to attack Taiwan, Uruguay, Japan, Holland, Mexico, Ecuador, China, Panama, and Korea.

The US Civil War, fought because the North and South could agree only on endless expansion but not on the slave or free status of new territories, was not only a war between North and South, but also a war fought by the North against the Shoshone, Bannock, Ute, Apache, and Navajo in Nevada, Utah, Arizona, and New Mexico – a war that killed, conquered territory, and forced thousands into a military-run concentration camp, Bosque Redondo, of the sort that would later inspire the Nazis.

Prior to WWII, even including much of the base expansion of WWI, many bases were not permanent. Some were, but others, including most in Central America and the Caribbean, were understood to be temporary. WWII would change all that. The default status of any base would be permanent. This began with FDR’s trading of old ships to Britain in exchange for bases in eight British colonies – none of which had any say in the matter. Neither did Congress, as FDR acted alone, which created a horrible precedent. During WWII the United States built and occupied 30,000 installations on 2,000 bases on every continent.

WWII was only ever partially ended. Huge military forces were kept permanently stationed abroad. Henry Wallace thought the foreign bases should be handed over to the United Nations. Instead he was quickly shuffled off the stage. Vine writes that hundreds of “Bring Back Daddy” clubs were formed across the United States. They didn’t all get their way. Instead the radical new practice was begun of shipping families off to join their patriarchs in permanent occupations – a move largely aimed at reducing rapes of local residents.

Of course, the US military was significantly reduced after WWII, but not nearly to the extent it had been after other wars, and much of that was reversed as soon as a war could be started up in Korea. The Korean war led to a 40% increase in overseas US bases. Some might call the war on Korea an immoral horror or a criminal outrage, while others would call it a tie or a strategic blunder, but from the point of view of base construction and the establishment of weapons-industry power over the US government, it was, exactly as Barack Obama claimed during his presidency, a tremendous success.

Eisenhower spoke of the military industrial complex corrupting the government. One of many examples offered by Vine is that of US relations with Portugal. The US military wanted bases in the Azores, so the US government agreed to support Portugal’s dictator, Portuguese colonialism, and Portuguese NATO membership. And the people of Angola, Mozambique, and Cape Verde be damned – or rather, let them build up hostility toward the United States, as a price to pay for keeping the United States “defended” by a global array of bases. Vine cites 17 cases of US base construction displacing local populations around the world, a situation that exists side-by-side with US text books claiming that the age of conquest is over.

NATO served to facilitate the construction of US bases in Italy, which Italians might never have stood for had the bases been called “US bases” rather than being marketed under the false banner of “NATO bases.”

Bases have continued to proliferate around the globe, with protests usually following. Protests against US bases, often successful, often not successful, have been a major part of the past century of world history rarely taught in the United States. Even the well-known peace sign was first used at a protest of a US military base. Now bases are spreading across Africa and up to the borders of China and Russia, while US culture grows accustomed to ever more routine wars fought by “special forces” and robot planes, nuclear weapons are being built like mad, and militarism is unquestioned by either of the two big US political parties.

If the wars are – in part – for the bases, shouldn’t we still ask what the bases are for? Vine recounts Congressional investigators concluding that many of the bases are kept in place by “inertia.” And he recounts various military officials indulging in fear (or, more accurately, paranoia) that sees aggressive war creation as a form of defense. These are both very real phenomena, but I think they depend on an overriding drive for global domination and profit, combined with a sociopathic willingness (or eagerness) to generate wars.

Something that I never think any book focuses on enough is the role of weapons sales. These bases create weapons customers – despots and “democratic” officials who can be armed and trained and funded and made dependent upon the US military, making the US government ever more dependent upon the war profiteers.

I hope every person on earth reads The United States of War. At World BEYOND War we have made working to close bases a top priority.

David Swanson is an author, activist, journalist, and radio host. He is executive director of WorldBeyondWar.org and campaign coordinator for RootsAction.org. Swanson’s books include War Is A Lie and When the World Outlawed War. He blogs at DavidSwanson.org and WarIsACrime.org. He hosts Talk Nation Radio. This originally appeared at DavidSwanson.org.