The pre-positioning of the BBC correspondent on HMS Defender shatters the pretense that the BBC is something different to a state propaganda broadcaster. It also makes plain that this propaganda exercise to provoke the Russian military was calculated and deliberate. Indeed that was confirmed by that BBC correspondent’s TV news report last night when he broadcast that the Defender’s route “had been approved at the very highest levels of the British government.”

The Prime Minister does not normally look at the precise positions of British ships. This was a deliberate act of dangerous belligerence.

The presence of a BBC correspondent is more than a political point. In fact it has important legal consequences. One thing that is plain is that the Defender cannot possible claim it was engaged in “innocent passage” through territorial waters, between Odessa and Georgia. Let me for now leave aside the fact that there is absolutely no necessity to pass within 12 miles of Cape Fiolent on such passage, and the designated sea lane (originally designated by Ukraine) stays just out of the territorial sea. Look at the definition of innocent passage in Article 19 of the UN Convention on the Law of the Sea: 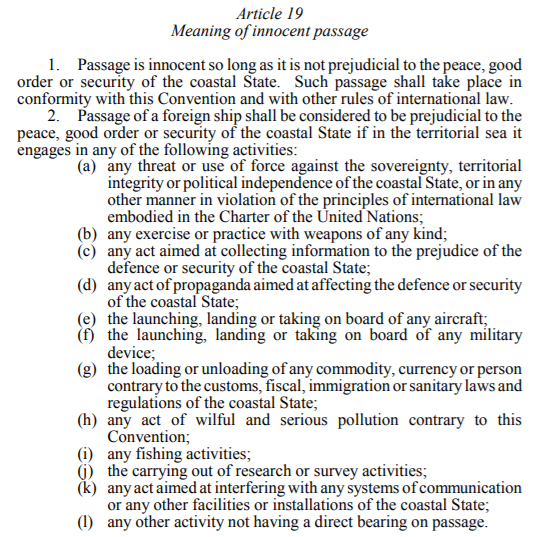 Very plainly this was not innocent passage. It was certainly 2 (d) an act of propaganda, and equally certainly 2 (c), an exercise in collecting information on military defenses. I would argue it is also 2 (a), a threat of force.

I want to impress on you how mad this is. The whole point of “territorial sea” is that, legally, it is an integral part of the state and that the state’s full domestic law applies within the territorial sea. That is not the case with the much larger 200 mile exclusive economic zone or sometimes even larger continental shelf, where the coastal state’s legal jurisdiction only applies to specific marine or mineral resources rights.

Let me put it this way. If somebody is murdered on a ship within twelve nautical miles of the coast, the coastal state has jurisdiction and its law applies. If somebody is murdered on a ship more than twelve miles off the coast, the jurisdiction and law of the flag state of the ship applies, not the law of any coastal state in whose exclusive economic zone the ship is.

In international law, the twelve mile territorial sea is as much part of the state as its land. So to sail a warship into Crimean territorial seas is exactly the same act as to land a regiment of paratroops in the Crimea and declare you are doing so at the invitation of the Government of Ukraine.

There is no dispute that Russia is in de facto control of the Crimea, irrespective of British support for the government of Ukraine’s claim to the region. It is also true that Russian annexation of the Crimea was not carried out in an accordance with international law. However, it is not, in practice, likely to be reversed and the situation needs to be resolved by treaty or by the International Court of Justice. In the interim, the UK government legal position can only be that Russia is an “occupying power”. It is impossible that the UK government legal position is that Ukraine is in “effective control” of the territory.

We need to see the legal advice provided by FCO legal advisers. It is simply not the practice in international law to ignore the existence of an occupying power which is a recognized state, and act with armed forces on the authority of a government not in effective control. The difference in British attitude towards Russia as an occupying power and towards Israel is tellingly different.

The legality of the British action is, at very best, moot. In realpolitik, it is an act of brinkmanship with a nuclear power and further effort to ramp up the new Cold War with Russia, to the benefit of the military, security services and armaments companies and the disbenefit of those who need more socially useful government spending. It is further an act of jingoist populism for the neo-liberal elite to distract the masses, as the billionaires’ incredible wealth continues to boom.

NATO will shortly commence a naval exercise in the Black Sea. As not all the member states of NATO are quite as unhinged as Johnson, it is to be hoped it will refrain from this kind of extra layer of provocation. There is a large part of me that says they cannot possibly be mad enough to attempt to intervene in Ukraine with military force, or at least its threat. But then I look at Johnson and Biden, and worry. This can all go horribly wrong.