What if I told you that for decades a significant portion of your tax dollars have been used to aid and support criminals, warlords, and child molesters as they perpetrated atrocities against their victims?

This may sound like a fringe conspiracy theory but, in fact, these are the types of people whom your tax dollars have been supporting for decades in the government and security forces in Afghanistan. Conservatively, the costs in dollars of the Afghanistan War since 2001 amounts to about $2.3 trillion (approximately $300 million per day for the last 20 years). 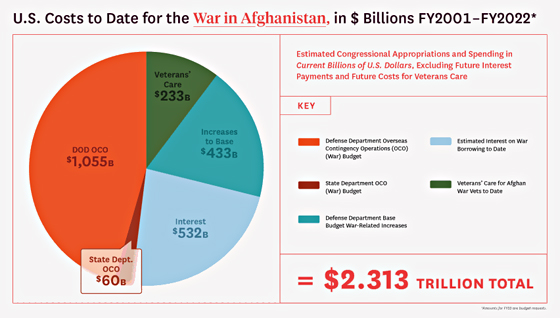 These are heavy costs that Americans will be paying for decades, not to mention the costs of human life, injury, destabilization. Just in terms of cost-benefit analysis, what have we gained (benefit) for what we paid (cost)? This is an important subject, but Americans should be aware of the fact that not only may the high costs not have been worth it, American taxpayer dollars supported some of the worst criminal elements in Afghanistan – warlords, gang leaders, rapists, child molesters.

The stated goal was to repel the Taliban and al-Qaeda (or al-Qaeda-like elements), establish security in Afghanistan trained by American forces, and establish democratic institutions through the imposed central government. In doing so, however, local strongmen were chosen for the task and put in positions of power that invited corruption and abuse. American military support, guns, training, and money now empowered and emboldened these criminals to use these factors against their enemies and abuse victims.

What is the proof that the above-mentioned abuses actually took place?

"In April 2011, four armed ALP (Afghan Local Police) members in Baghlan abducted a 13-year-old boy on his way home from the bazaar and took him to the house of an ALP sub-commander where he was gang raped."

"Communities are being asked to make a choice: you are either with us or against us. But for many Afghan communities the choice is not binary. In some parts of the country this decision means either supporting a government-backed militia that has raped, killed, and robbed, or the Taliban, which has carried out bomb attacks, assassinated civil servants, and threatened to kill teachers in girls’ schools."

This is an unconscionable dilemma into which many of the Afghan people have been forced. It would be bad enough that this type of choice existed anywhere in the world, but the fact that your tax dollars have funded and supported one side, and thereby supported their abuses indirectly, means that we paid for that. Another publication entitled, "Two Choices: Taliban or Child Raping Police," wrote in 2009,

"Afghanis told American and British military personnel that they were afraid of local police – many of whom are ex-militia loyal to a local warlord – returning to power because, not only do they lack professionalism, but also have a predilection for depravity.

According to locals, the police in Helmand have been known to steal from people and abduct pre-teen boys and rape them. They often demand bribes or kickbacks at checkpoints, or cut deals with opium smugglers…."

This report describes corrupt warlords and their cronies, rapists and child molesters, drug smugglers, thieves, and extortionists. When Americans are told that the reason for continued military presence and intervention in Afghanistan for American safety and freedom and to prevent bad elements like the Taliban from return to power (which eventually happened anyway), these facts concerning what type of system is being imposed on Afghanistan at America’s expense are usually ignored.

Just recently, Gareth Porter reported the serious problem of the strategy of attempting to train Afghan security forces against the Taliban so that the United States can eventually withdraw from the region – siding with criminal abusers in the process:

"The strategy of the major US and British military offensive in Afghanistan’s Helmand province aimed at wresting it from the Taliban is based on bringing back Afghan army and police to maintain permanent control of the population, so the foreign forces can move on to another insurgent stronghold.
But that strategy poses an acute problem: The police in the province, who are linked to the local warlord, have committed systematic abuses against the population, including the abduction and rape of preteen boys, according to village elders who met with British officers."

"[Ambassador Ron] Neumann said the problem of police abuses against the population can be traced back to the creation of the national police after the overthrow of the Taliban regime in late 2001. The Afghan police were not created afresh by US and NATO force, Neumann recalls but were ‘constituted from the forces that were then fighting the Taliban’."

Worse still, two sources – The New York Times and the Military Times – reported that American troops were put into the ethically untenable position of being told to ignore child sex abuse by their Afghan allies. What would you do in such a circumstance? There is probably no correct answer. According to Kyle Rempfer in the Military Times in 2017, "American troops were told to ignore the rape and abuse of children by Afghan security forces they were partnered with…" and Joseph Goldstein further explained,

"Rampant sexual abuse of children has long been a problem in Afghanistan, particularly among armed commanders who dominate much of the rural landscape and can bully the population. The practice is called bacha bazi, literally ‘boy play,’ and American soldiers and Marines have been instructed not to intervene – in some cases, not even when their Afghan allies have abused boys on military bases, according to interviews and court records."

"The policy has endured as American forces have recruited and organized Afghan militias to help hold territory against the Taliban. But soldiers and Marines have been increasingly troubled that instead of weeding out pedophiles, the American military was arming them in some cases and placing them as the commanders of villages – and doing little when they began abusing children."

Dan Quinn was a former Special Forces captain who beat up an American-backed militia commander for keeping a boy chained to his bed as a sex slave. 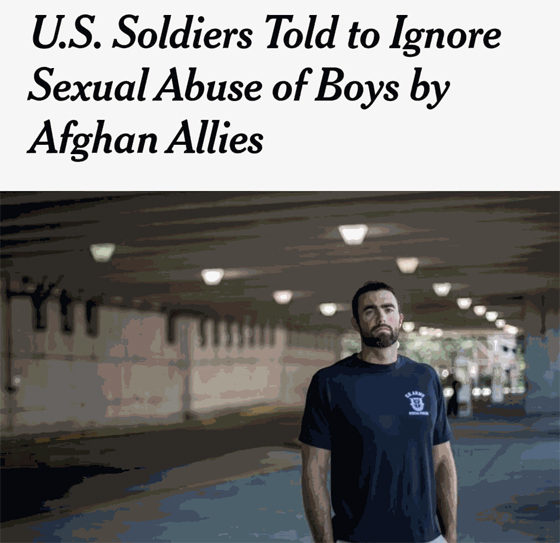 Dan Quinn, as relayed from a personal conversation with his father back home, described his dilemma funding, arming, and training bad people against bad people and the consequent abuses involved,

"The reason we were here is because we heard the terrible things the Taliban were doing to people, how they were taking away human rights…But we were putting people into power who would do things that were worse than the Taliban did – that was something village elders voiced to me."

American servicemen have also died as a result of this policy. Imagine having a friend or relative killed in Afghanistan by an Afghan victim of sexual abuse perpetrated by an Afghan police commander empowered, funded, and trained by the US military.

That very event occurred in reality on an American military base. Lance Corporal Buckley and two other marines were killed in 2012 by an entourage of boys living at the base and being sexually abused by an Afghan police commander named Sarwar Jan. American marines were told to ignore it and put into the untenable ethical situation of allying with criminals committing sexual abuse and other atrocities against human rights. But ignoring this abuse did not save them from the consequences of an attack by the abuse victims who view the Americans as guilty by association. These are the warlords and criminals empowered, funded, and trained by the American military in Afghanistan largely at the expense of the American taxpayer.

It would be bad enough if American taxpayer dollars were just wasted on a failed project, but the tax dollars that supported this facilitated positive harm. While being told this war effort is to ultimately bring peace, safety, and justice, the unintended consequence is that injustice is perpetrated.

Joshua Mawhorter is a high school teacher in government, economics, U.S. history, and personal finance. He also is involved in several teaching ministries at his local church that involve teaching the Bible, church history, apologetics, philosophy and worldview. Subscribe to his YouTube channel Political Factions on YouTube which addresses topics in philosophy, government, American history, international relations and foreign policy, and Austrian economics and economic history.