We did get that right. At an intense seven-hour session in Rome, Biden’s national security advisor, Jake Sullivan, told the Chinese in no uncertain terms they are next in line for the sanctions hit parade:

Jake Sullivan told CNN the US had been “communicating directly, privately to Beijing that there will absolutely be consequences for large-scale sanctions evasion efforts or support to Russia to back-fill them” amid the Ukraine war.

For want of doubt, the rest of the US government has not been loath to reinforce Sullivan’s edict:

Officials of the United States and other countries have sought to emphasize in recent weeks that siding with Russia could carry consequences for trade flows, development of new technologies and expose China to secondary sanctions.

Chinese companies defying U.S. restrictions on exports to Russia may be cut off from American equipment and software they need to make their products, US Commerce Secretary Gina Raimondo said last week.

Just brilliant, that. The US desperately needs a resurgence of economic growth and especially export sales in order to cope with the $86 trillion of debt that the Fed’s easy money policies have foisted upon the combined public and private sectors in recent decades, but in its self-appointed role as global gendarme Washington insists on throwing spanners in the gears of private capitalism whenever and wherever possible.

In this context, we can’t say enough bad things about Jake Sullivan and what he represents. That is to say, he is a Washington lifer who instinctively believes that the world turns around the exercise of state power, and whose experience is entirely within the post-Soviet era in which America’s hegemonic writ was taken as an article of faith by the Washington nomenclatura.

Accordingly, the Sullivanistas do not understand that the economic blessings of global commerce and finance are a delicate thing that cannot be intruded upon and disrupted with impunity. To the contrary, global commerce consists of an intricate tissue of contracts, confidences and expectations that needs be shielded from arbitrary state interventions at all hazards.

Of course, Sullivan and his kind wouldn’t have a clue because they have never spent a day away from the bosom of the state. The altogether different world of private commerce is utterly foreign to them.

For want of doubt, recall that this little piss ant didn’t graduate from Yale Law School until 2003 and soon thereafter got on the Federal teat as chief counsel to Senator Amy Klobuchar, who then seconded him to Hillary Clinton. His WikiLeaks bio tells the rest and it’s all you all you need to know:

In 2008, Sullivan was an advisor to Hillary Clinton during the primary cycle and then to Barack Obama during the general election campaign. He prepared Clinton and Obama for debates. When Clinton became Secretary of State, Sullivan joined as her deputy chief of staff and Director of Policy Planning, and he traveled with her to 112 countries.

Sullivan worked in the Obama administration as Deputy Assistant to the President and National Security Advisor to U.S. Vice President Joe Biden. He became Biden’s top security aide in February 2013 after Clinton stepped down as Secretary of State. In those posts, he played a role in shaping US foreign policy towards Libya, Syria, and Myanmar.

On June 20, 2014, The New York Times reported that Sullivan was leaving the administration in August 2014 to teach at Yale Law School.

Sullivan was Hillary Clinton‘s chief foreign policy adviser during her 2016 bid for the presidency. Several days before the election, Sullivan promoted the theory that the Trump Organization was connected to a Russian bank.

As of 2020, he was a nonresident senior fellow at the Carnegie Endowment for International Peace.

The last stint is especially noteworthy. Old peace-loving Andrew Carnegie would be rolling in his grave if he understood how the foundation he endowed has morphed into a think tank for the Warfare State.

Yet that’s the heart of the matter. Washington has become a vast interlocked network of official national security agencies, think tanks, NGOs and lobbies – all dedicated to the promotion of a hegemonic policy model that has nothing to do with the safety and security of the American homeland and everything to do with the power and pelf of the revolving cadres of Imperial City careerists who man the network.

But truly, the threat of secondary sanctions is a road too far. They underscore the futility of economic sanctions as a substitute for the exercise of overt military power. That is, they enable the current generation of Washington nomenklatura to act as the bully boy and Spanker-in-Chief in neighborhoods all around the world without committing American blood and treasure to their pointless endeavors to force the world to conform to Washington’s commands.

Needless to say, economic sanctions don’t work – they just boomerang back to their issuers as well as innocent third parties all around the planet.

These harms, in turn, cause injured parties to strike out with their own economic counter-measures. For instance, now that Russia has cut off fertilizer exports in response to Washington’s sanctions, Argentina, one of the world major grain exports, has undertaken to cap its own corn and wheat exports in order to shield its people from soaring global food prices.

That action, of course, will only exacerbate the spiraling cost of feeds and foods.

Or consider the foolishness of Washington ban on Russia’s airlines. The latter, in turn, has closed its skies to US and allied aviation, which means that US/Asia and Asia/Europe flights will have to circumnavigate Russian airspace at great expense and fuel consumption, driving global aviation fuel prices still higher.

In response to the US ban on the shipment of commercial aviation parts to Russia, in turn, Putin signed a law on Monday allowing foreign-owned aircraft to be re-registered as Russian for domestic use, according to state-run news agency TASS.

That amounts to confiscation of leased aircraft, which, in turn, are backed by tens of billions of debt issued by European and US aircraft leasing companies.

That’s right. Russian airlines would have the ability to seize and operate aircraft leased by companies that are no longer operating in Russia owing to sanctions imposed by the US, yet Russian airlines have almost 780 leased jets, with 515 leased from abroad.

These latter are certain to trigger defaults and related cross-defaults, thereby further roiling international debt markets. Essentially, Washington has shit-canned the sanctity of contracts in order to spank Putin.

Likewise, Washington’s Sanctions War may bring the demise of the petro-dollar regime in place since 1973. In fact, one of the core staples of the past four decades, and an anchor propping up the dollar’s so-called reserve status, was a global financial system based on the petrodollar: That is, an arrangement under which oil producers would sell their product to the US (and the rest of the world) for dollars, which would then recycle the proceeds back into dollar-denominated assets, especially US treasury and corporate debt. This explicitly propped-up the USD as the world reserve currency, by creating artificial dollar demand and in the process backstopped the standing of the US as the world’s undisputed financial superpower.

Now the WSJ is out with a blockbuster report that “Saudi Arabia is in active talks with Beijing to price some of its oil sales to China in yuan.” Such a move could obviously cripple not only the petrodollar’s dominance of the global petroleum market and mark another shift by the world’s top crude exporter toward Asia, but also undermine the entire dollarized global financial system. Yet under the latter Washington has relentlessly taken advantage of the dollar’s reserve status by printing as many dollars as needed to fund runaway Federal spending for the past several decades.

These Saudi talks with China over yuan-priced oil contracts have apparently been off and on for six years but have accelerated this year as the Saudis have grown increasingly unhappy with decades-old U.S. security commitments to defend the kingdom.

China buys more than 25% of the oil that Saudi Arabia exports, and if priced in yuan, those sales would boost the standing of China’s currency, and could set the Chinese currency on a path to becoming a global petroyuan reserve currency rivaling the dollar.

In any event, a world economy which fragments into multiple currency and protectionist trading blocs will be inherently less efficient and prosperous than one based on wide-open, unimpeded peaceful private commerce.

So the question recurs. What profound purpose justifies this unfolding mayhem?

Simple. The Washington Sullivanistas are a clear and present danger to the peace and prosperity of the world. Had they not insisted on extending NATO to Russia’s very doorstep and overthrown the Russian-friendly government in February 2014 that had been honestly elected by a divided Ukrainian electorate, there would have been no Ukrainian civil war funded by Washington aid and arms and no Russian invasion and the treacherous global crisis now unfolding, jeopardizing the very future of mankind.

As we indicated yesterday, this crisis is only going to get far worse. That’s because once Ukraine’s unhinged government realizes that the NATO cavalry isn’t coming and pivots to the logical alternative of capitulating to Moscow’s demands, the Washington War Party will go berserk with vastly intensified global economic warfare.

Yet just note where that next phase will start. This morning’s PPI made it official: We are now in double digit inflation-land. In fact, the PPI for Final Demand Finished Goods came in at 14.1% on a Y/Y basis, the highest gain since 14.7% at the peak of the inflation blow-off in September 1980. 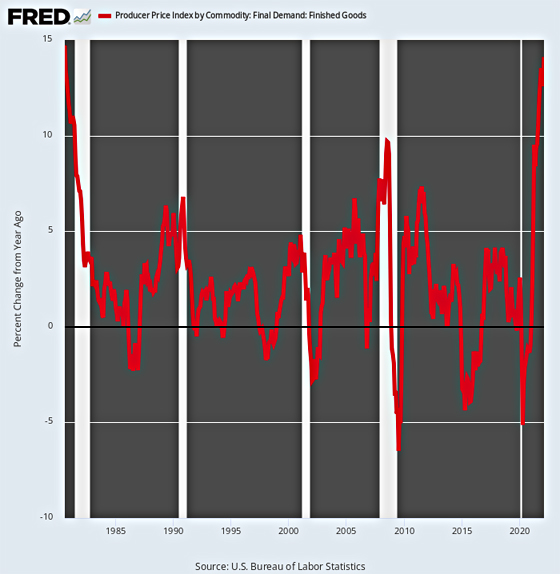 As the saying goes, however, apparently we “haven’t seen nothing yet.” The index for all PPI commodities further up the production pipeline actually came in at 20.1% on a Y/Y basis, the largest gain since September 1974. And even that was somewhat artificial because it reflected the blow-off top upon the ending of Nixon’s wage and price controls. 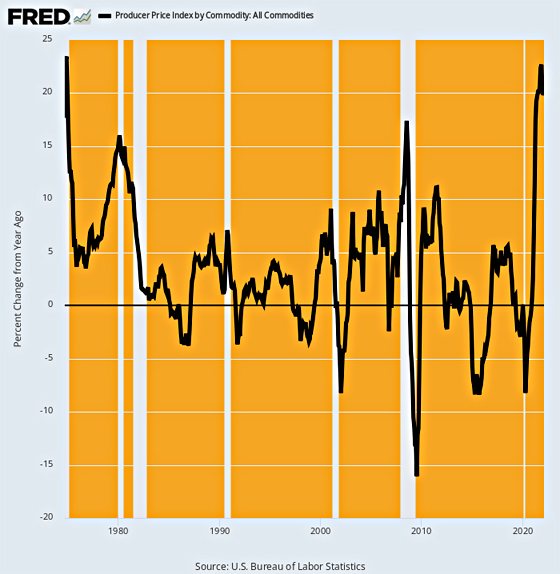 So if you don’t think the Fed is drastically behind the inflation fighting curve, this morning’s PPI should have removed all doubt. We are now clearly headed into an unprecedented trade and sanctions war with more than half of he world’s population, yet the American and global economy is being taken hostage by ignorant, arrogant jackasses like Jake Sullivan.

The result will be an insuperable inflationary mess that the Fed and the other money-printing central banks can’t possibly cope with. Among other things this means that historic data on stock market draw-downs is about to be drastically surpassed.

The median has been a 24% peak to trough decline and the average for the past three recessions has been almost 50%. But the chart below is about to get a bar that plunges far deeper. 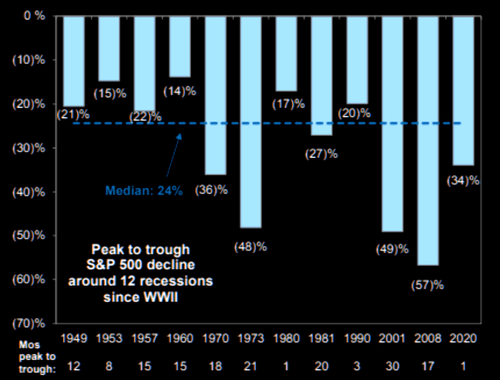