This book is the definitive study of how a small group of dedicated imperialists took over America’s foreign policy. Loaded with footnotes and bibliography, it follows those who made the current disaster in America’s relations with most of the world. Chickenhawk academic intellectuals in Washington think tanks, with visions of military glory, knowing little of the outside world, and without military or business experience, generated the “go it alone/international law be damned” warfare agenda. 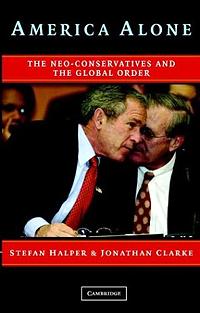 “Neocons,” write the authors, “always emphasized unilateral military force (‘preemptive and unilateral war’) as America’s first and often only option,” ignoring America’s “soft power,” political or economic, as a means to attain international objectives. They quote neocon Max Boot, who wrote in the Wall Street Journal that he was “looking forward to a new era when America, like the British Empire, will always be fighting some war, somewhere, against someone.”

“America has lost the moral high ground and is facing growing isolation in the world. America is the world’s bastion against tyranny; its weakening and all the new hatred against its government is the reason its friends are so disturbed,” said co-author Jonathan Clarke at a recent Cato Institute event. “Our book is about the institutional failure, the reasons neocons were so successful, and what will happen in the future.”

The book analyzes several disturbing trends: the absence of international business input into war policies (and the consequent loss of American brand-name goodwill in much of the world); the new influence of America’s religious fundamentalists (who look favorably upon Mideast chaos as hastening Armageddon); the intimidation of intelligence officials and the media; and the silence of major American institutions in the face of the administration’s lies.

The authors remind us that the neoconservatives wanted a military confrontation with China before 9/11. Although many are accused of having an Israel First bias, it’s not fair to say that is their only concern. Their Wolfowitz Doctrine was to take down any rising power in the world. Most of them also supported the Kosovo war. Indeed, Bush waffled when that war started, until Wolfowitz rushed down to Texas to persuade the governor to support it.

Many neocons got their credentials with jobs in the Reagan administration and claim his mantle for their later objectives. Clarke and co-author Stefan Halper, both solid Reaganites, explain that Reagan never had such imperial theories. On the inside cover, leading conservative publisher Alfred Regnery writes, “Particularly, contrary to their own assertions, neoconservatives are not the inheritors of the Reagan legacy in foreign policy.”

Neocons are also “not at all hostile to the idea of a welfare state,” according to their godfather Irving Kristol. In fact, they are the ultimate purveyors of the warfare-welfare state. At the Cato event mentioned above, columnist Robert Novak commented, “There is nothing conservative about neoconservatives. Indeed, you’ll see [former Democratic Senator] Scoop Jackson’s photo on their walls, not Ronald Reagan’s. … It was their alliance with the Religious Right, the biggest support group for war, that gave them their strength, that and their influence over National Review and other conservative media.” Novak criticized that magazine for allowing its top neocon, David Frum, to brand him and other solid conservatives as “anti-Semitic” for opposing the Iraq war. (Novak, by the way, is of Jewish descent.)

One chapter delves into the “Neoconservative Network” of interlocking institutions and its 1998 letter to Clinton urging the invasion of Iraq. Signatories such as Elliot Abrams, Richard Armitage, John Bolton, Douglas Feith, Richard Perle, Peter Rodman, Rumsfeld, Wolfowitz, and David Wurmser were all given key foreign policy positions by Bush. The network’s leading institutions are the American Enterprise Institute, the Heritage Foundation, JINSA (Jewish Institute for National Security Affairs), Center for Security Policy (Frank Gaffney), Hudson Institute and Bill Kristol’s Project for the New American Century. Their funding comes from defense contractors and conservative groups such as the Bradley Foundation, Olin Foundation, Sarah Scaife Foundation, Smith Richardson Foundation, and the Castle Rock Foundation (supported by the Coors family). Bill Buckley has now stated that he would have opposed the war if he had known the truth, but National Review would not publish any antiwar conservative writer and thus made neocon objectives respectable on the Right.

Another network document of interest is 1996’s A Clean Break, prepared by JINSA, Richard Perle, David Wurmser, Douglas Feith and other leading neocons. It argued that Israel should abandon the Oslo peace process and any negotiations of land for peace, stating that “Our claim to the land – to which we have clung for hope for 2000 years – is legitimate and noble.” I should note that Feith, in his key policy planning position over the Pentagon, is also widely reported as the author of the plan to dismiss all the Iraqi soldiers and government officials, which has contributed so much to the chaos in Iraq. The book also says he blocked the State Department’s planning for a civil administration to be ready right after the war. Correspondent Jim Lobe notes that Feith’s former law partner is an attorney for Likud settlers on the West Bank. Many experts think that he promotes Sharon’s wants, namely that Iraq be debilitated by chaos as a way of keeping it weak.

Unfortunately, the authors don’t pay much attention to other forces for war such as the military industrial complex, big media (which thrives on war footage), think tank intellectuals (who thrive on TV exposure and lectures) and so on. (See “The Beltway Bombers.”)The authors also neglect the fascination many intellectuals have with violence and war. In another era, Peter Viereck noted “how so many of the founders of Germany’s National Socialist Party were artists, writers and academics … intellectuals who lusted for brute violence … ‘bloody-minded professors’ running amok in politics.”

The authors explain that initially neocons could not sell their agenda to President Bush and were “just another lobby trying to gain access.” 9/11 was their godsend, after which their network, thanks to VP Cheney’s having put so many of them in key government positions, could really push its agenda.

They also gained a tremendous increase in their strength (particularly in Congress) from alliance with the Religious Right. “Building upon the biblical foundations for an apocalyptic confrontation in the Middle East, the Christian Right came to support the neoconservative agenda concerning Israel,” says the book.

Another chapter details losses of freedom under the Patriot Act, a good synopsis for readers who may have forgotten or become confused since it first passed Congress. It highlights the removal of judicial restraint on police power and the increase in presidential authority. With unending war on the horizon, the authors write, “At what point does the government cease arrogating to itself more and more power (over Americans’ civil liberties). … It is quite possible that America will end up with the worst of both worlds, a highly intrusive surveillance infrastructure that contributes little to public safety.”

About the future, the book explains the new phenomenon of “counter-Americanism,” whereby foreign nations now “actively seek to frustrate American objectives.” This is a drastic change from before, when “America was, generally, pushing through an open door” to promote its goods, services and ideas. The turnaround in foreign views of America is staggering from Ireland and Turkey (70% negative) to South Korea and Indonesia, which shifted from a 90% positive view of America to 90% negative. Even in Latin America, positive views toward America declined in 7 of 8 nations. Meanwhile “as American attention has been monopolized by Iraq, the American primacy in Asia is slipping away.”

In conclusion, the authors explain how fighting terrorism should be based upon the lessons learned from other nations. For example, England finally neutralized IRA terrorists with political action and compromise after generations of war. They argue that we need the active help of other nations. Going it alone and antagonizing much of the world only makes us less safe.

“An essential aspect in combating terrorism is moral legitimacy,” they argue. “Instead of a carefully calibrated approach to these adversaries drawing on a mix of instruments – political, intelligence, police, special forces, and so on – America has gone to war with an idea – ‘terrorism’ – and now finds itself on the cusp of a ‘clash of civilizations’ with the Islamic world.”

Epilogue: The word “neoconservative” is losing respectability. Midge Decter, wife of Norman Podhoretz, editor of Commentary, and a director at the Heritage Foundation, spent the first minutes of her first recent speech at the Philadelphia Society denying that she, her husband, her children or her grandchildren were ever neoconservatives. Yet Google shows 834 links of her name to the word and 2,750 for her husband.

Jon Basil Utley is associate publisher of The American Conservative. He was a foreign correspondent in South America for the Journal of Commerce and Knight Ridder newspapers and former associate editor of The Times of the Americas. He is a writer and adviser for Antiwar.com and edits a blog, The Military Industrial Congressional Complex.