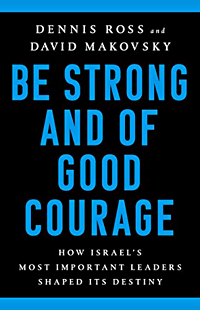 It is always worthwhile to monitor – before it’s too late – policy recommendations emerging from the American Israel Public Affairs Committee, AIPAC ecosystem. Since 1984 that ecosystem includes AIPAC’s associated think tank, the Washington Institute for Near East Policy. Two WINEP thought leaders are currently advancing a serious proposal for the US to help Israel avert the fate of becoming a "bi-national state." It’s a two-step process. First the US would formally recognize Israeli sovereignty over large Israeli-annexed West Bank settlement blocs. Then the U.S. would use its powers of persuasion to win European, U.N. and Arab acceptance of the deal, all the while giving Israel billions more in foreign assistance.

All of these policy prescriptions appear in the new Dennis Ross/David Makovsky book, Be Strong and of Good Courage: How Israel’s Most Important Leaders Shaped its Destiny. Dennis Ross worked on the "peace process" within US government for decades. Though trying to maintain a pretense of impartiality, Israel partisans like Ross working within such teams always managed to make the US appear to operate as "Israel’s lawyer." WINEP’s David Makovsky labored as a journalist and then executive editor of the Jerusalem Post reporting on the "peace process" before joining WINEP.

The rocket boosters for the new book’s delivery vehicles are lessons Makovsky and Ross reveal from decisions made by Israel’s "founding fathers." According to the book, whenever Israel was at an existential inflection point, David Ben-Gurion, Menachem Begin, Yitzhak Rabin and Ariel Sharon made near-unilateral and controversial decisions necessary for Israel to prevail.

For example, just prior to Israel’s declaration of statehood in 1948, David Ben-Gurion had to overcome opposition from the venerable US Secretary of State George Marshall. Marshall famously argued for a US funded plan to rebuild post-WWII Europe. Less known is that Marshall wanted "Zionists to delay declaration of statehood" based on department views of how to best advance US policy toward the Soviet Union and Arab states.

In David Ben-Gurion’s estimation, according to the book, "a declaration of statehood, by contrast, would allow the Zionists to tap their greatest resource – supporters abroad – who could help smuggle weaponry into the nascent country…" Ben-Gurion convinced members of his cabinet, who preferred postponement and accepting a truce, that immediately declaring statehood was the proper strategy.

Key to Ben-Gurion’s success – according to the book – was cultivating "a mass US movement to pressure leaders in Washington…" Ben-Gurion believed that Western democracies would, whenever a crisis arose (whether precipitated by Israel or not) respond to well-organized public pressure campaigns. This is why Ben Gurion spent ten months in 1940-1941 "rallying American Jewish organizations, coaxing them toward realizing that Zionism did not threaten their identity as Americans." The book omits the precise details – which are available thanks to the release of FBI investigation records and a handful of prosecutions – about precisely how the Jewish Agency American Section, which was under Ben-Gurion’s command, organized a massive illegal weapons procurement and smuggling network in the US. Ben-Gurion also reached out to churches and labor unions to build a broader lobby for Israel within the US. Although, again, the book does not mention known details about the public relations and lobbying campaigns of the Israel lobby’s umbrella group the American Zionist Council which became AIPAC, it acknowledges the key role of proto-Israeli leaders in their formation.

Today the US Israel lobby must help Israelis avoid the fate of becoming a binational state, where Palestinians have the right to vote and other accoutrements of citizenship, according to Makovsky and Ross. It’s only fair, since Israel has provided a rallying point for Jewish identity in the US, according to the pair.

"Jewish leaders, too, have a stake in Israel preserving its basic Zionist character; it is very much part of their ethos and belief system. In addition, they well know that Jewish identity in America has, at least in part, been influenced by the ability to identify with Israel. Should that become more difficult, it would certainly produce a critical loss of support for Israel in the Jewish community, especially among the younger Jewish demographic that embraces more progressive, liberal values."

If the delivery vehicle of Be Strong and of Good Courage is a collection of enticing founding father bios, what is the payload? It appears in the final chapter. As to be expected, it is an appeal for additional withdrawals from the U.S. Treasury Department and already dangerously overdrawn bank account of US international standing.

The status quo drift toward a binational state is unsustainable and a "prescription for endless conflict." The root cause of that problem, which the authors intensely fixate upon, is the high "Arab" birth rate in East Jerusalem, parts of Israel, the West Bank, and Gaza. Israel can’t hang onto or annex everything. So, decisions must now be made.

Israel’s occupations, human rights violations and blockades vex European leaders, generate controversy on American college campuses and are now even being exposed by some elite opinion makers. While, according to the book, these diplomatic costs of militarily occupying and subjugating Palestinians to dire human rights conditions remain "manageable," maintaining the pretense that there is a viable "peace process" that will lead inevitably to the "two state solution" the authors claim to prefer – is no longer feasible. And the Israelis are utterly oblivious to the true "demographic trends." The book also cites a litany of supposed evidence that Palestinians "never missed an opportunity to miss an opportunity" to obtain a state of their own. This has long been an Israel lobby canard, first deployed by Abba Eban, and no doubt plays well to Ross and Makovsky supporters.

The book proposes that in exchange for ending settlement construction east of the separation wall Israel built, much of it on Palestinian land, and a halt in Jewish real estate acquisition within Arab neighborhoods in occupied East Jerusalem, Israeli settlers would move to locations within Israel or to lands that will soon become part of Israel. Israel will of course maintain the right to conduct military operations east of the wall, but would abide Palestinian development of Dead Sea tourism and mineral industries.

The book recommends that the US Israel lobby, which partly owes its existence, identity and power to Israel, do what it does best: extract what Israel needs from America to realize Israel’s national ambitions. The US should provide "cash" to relocate settlers to areas within the Green Line or to newly annexed West Bank settlement blocs. The US should then block any UN resolutions opposed to unilateral Israeli annexations, and "work with the Europeans and others to gain their public support for Israel’s unilateral moves to ensure separation." The US should also fight the Boycott, Divestment and Sanctions (BDS) movement and publicly criticize European and Arab leaders who fail to wholeheartedly approve. Of course, Israel’s annexations will create new security challenges, so the US should also promptly increase Israel’s "qualitative military edge." 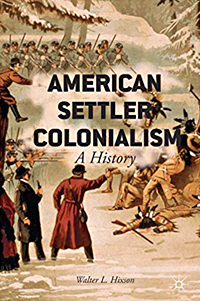 Given the plan’s source, it is unsurprising the book carries no compelling case about what the US and average Americans could possibly get out of this latest joint Israel-lobby cash and land grab. The book’s intense fixation on physical separation along religious and ethnic lines feel like a poor fit for a US popular conscience beginning to better come to terms with its own legacy of genocide against indigenous Americans and the enslavement of Africans. For growing numbers of newly sensitized Americans now familiar with the brutal realities of settler colonialism in the US (thanks to the work of such cross-disciplinary scholars as Walter Hixson) and Palestine (Ilan Pappe), it is impossible to not feel increasingly uneasy while reading the almost forensic research into the implications of Palestinian birth rates in Be Strong and of Good Courage.

The authors are determined not to let Israel’s expansion transform it into a country resembling the United States, because that would create pressure for representative government. "Indeed, it is hard to imagine American administrations and the American public simply dismissing Palestinian calls for one person, one vote if Israel absorbs most of the West Bank."

This book should serve as a warning. Americans should not allow their elected representatives to yet again be captured by Israel and its lobby and harnessed into supporting its ongoing violations of legitimate Palestinian claims. Instead, readers should accept the authors’ admissions about the true heritage and undue negative influence of Israel’s highly active lobbying appendages within the US. The worst admissions are true.

Americans’ next logical response should be organizing to elect representatives and a White House administration that is finally willing to enforce the JFK-era Justice Department order requiring AIPAC’s predecessor (which is applicable to successor AIPAC) register as an Israeli foreign agent and put a halt to the massive and ongoing Israeli (and unregistered pro-Israeli lobby) meddling in the US political system. Only then will US Middle East policy be able to return to a Marshall-like pre-state condition of being allowed to adequately consider the broader interests of all Americans and the rest of the world.

Grant F. Smith is the director of the Institute for Research: Middle Eastern Policy in Washington and the author of the 2016 book, Big Israel: How Israel’s Lobby moves America now available as an audiobook. IRmep is co-sponsor of the annual conference about Israel, the Israel lobby, Palestine, elections and free speech at the National Press Club.