The Gallup Organization was criminally charged in 2012 under the False Claims and Procurement Integrity Acts. The False Claims Act is the primary tool the U.S. government uses, leveraging insider whistle-blowers, to combat contracting fraud against the government. An uncontested 57-page complaint (PDF) reveals that Gallup intentionally delivered deceptive data to the US Mint, the US Department of State, and DHS (FEMA) to maximize profits on a series of no-bid contracts. Among other acts alleged in the complaint were keeping two sets of books and making job offers to federal employees in positions to renew Gallup’s lucrative government contracts. 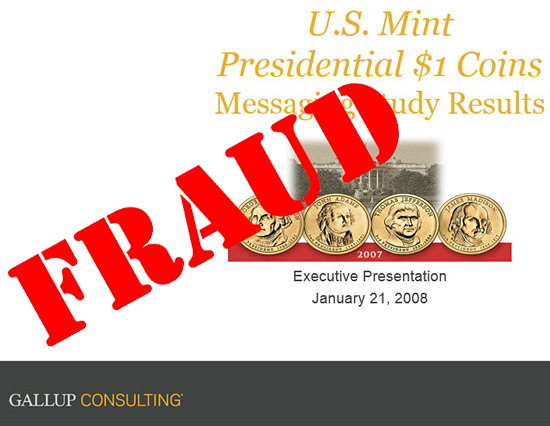 Gallup’s history and a review of Gallup’s actual US Mint work product – obtained from the US Treasury under the Freedom of Information Act and made available for the first time online – reveals Gallup’s willingness to secretly engage in fraud to protect lucrative serialized polling contracts. This company culture should raise questions about Gallup polls in categories where there is no similar polling for verification purposes or where Gallup results are inexplicably wildly at odds – over long time periods – with other pollsters.

In 1988 the Lincoln, Nebraska-based Selection Research Inc., a family owned private business, acquired Gallup and installed Jim Clifton as CEO where he remains to this day. In 1996 Gallup created a government division to land more contracts focused on tracking studies, polling, in-depth interviewing, qualitative research, and demographic analyses. In March of 2007, Gallup landed an indefinite delivery, indefinite contract with the United States Mint. CEO Clifton by 2008 was pressuring Gallup’s government division management to improve revenue and profit under its government contracts. Sameer Abraham, Vice President and Managing Research Director of Gallup’s government division hired in 1996, quickly got to work expanding the value of work under the no-bid contract from $3.5 million in 2008 to $7.5 million in 2009. Abraham did it by overbilling the US Mint for more than twice as many work hours as Gallup performed (51,525 hours billed versus 21,627 actually performed according to the criminal complaint).

Gallup simultaneously dangled offers to hire FEMA’s Timothy Cannon, who renewed and extended ever larger FEMA contracts for Gallup. On December 19, 2008 CEO Clifton and Cannon had lunch together. At the time, it was consensus among Gallup’s management that "We’ve got to give him an award or something. He is Gallup’s MVP outside of Gallup." After winning another round of contracts, on February 5, 2009 Gallup formally extended an offer of employment to Cannon to work in the Gallop government division starting at $175,000 per year. Both Cannon and Gallup subsequently reissued employment offer and acceptance letters to falsely certify that Cannon had no prior agreement for employment outside the federal government before he retired, to skirt rules against such hires.

Gallup’s overbilled polling work at the Mint proceeded smoothly. In 2005 Congress passed a law that authorized the production of $1 coins to address what it hoped would be high demand among public transportation, parking meter, vending machine and low denomination transaction currency users, citing earlier, hopeful coin studies containing Gallup data from the US and Canada.

The US began issuing $1 coins bearing the images of Presidents Washington, Adams, Jefferson and Madison in 2007. Gallup had won the US Mint contract on the basis of a November 21, 2006 Gallup report titled “Americans Support Dollar Coins Featuring Past Presidents” claiming Americans were at long last ready to begin using $1 denominated coins, rather than collecting or returning them to the bank as they had done in the past. Earlier efforts to launch dollar coins featuring suffragist Susan B. Anthony (1979-1981, 1999) and Lewis and Clark expedition guide Sacagewea (2000) were costly failures. But Gallup claimed in unverified polling that a new presidential $1 coin series would achieve success with a “95 percent confidence" at "maximum margins of sampling error" of "+/- 5%.”

It simply wasn’t true. Over the 2007-2009 period Gallup conducted its contract work for the US Mint $1 presidential coins soon either disappeared (as collectors kept them) or were unceremoniously dumped by merchants back at banks. Gallup had to admit that Americans found the coins too heavy, did not value claims that they saved money by lasting longer than paper currency, and that the coins would "save our country $5 billion."

Internal documents reveal the extremely questionable machinery of Gallup proprietary polling through the “Gallup panel of 48,000 households and 68,000 individual members.” Recruits into the Gallup panel receive a welcome packet and demographic questionnaire to complete, and then agree to answer three surveys per month. As rewards the panel members receive token thank-you gifts and a magazine that subtly flatters poll respondents with compliments about their importance and value of their opinions. Despite the compensation, the response rate is only 50-70%. The pool inevitably becomes saturated with respondents who want to retain the compensation, and ostensibly provide answers they feel will achieve that purpose. Others, perhaps critical thinkers and skeptics, leave the pool, leading to a 3% attrition rate. Gallup is left with a pool of respondents that will provide consistent – and consistently unrepresentative – results while allowing Gallup to claim to clients and stakeholders they are somehow “statistically relevant.” As a no-bid contractor, none of Gallup’s polling work for the Mint was ever verified.

But even such flawed polling machinery forced Gallup to admit in research findings and awareness studies what the US Mint already knew – that new $1 presidential coins were once more a tremendous flop. Undaunted, Gallup simply submitted additional proposals for crafting messaging, launching new pilot ad campaigns, and conducting more overbilled polling results. Gallup clearly intended to keep milking the no-bid US Mint contract for all it was worth.

Although the Government Accountability Office incorporated Gallup results into its own 2011 forecast (PDF) predicting that growing public acceptance of Presidential dollar coins would save the government $5.5 billion over three decades due to the coin’s durability, the gig was just about up. Treasury Secretary Timothy Geithner announced on December 11, 2011 circulation would be suspended due to budget constraints and increasing stockpiles of the unpopular Presidential dollar coins.

On November 27, 2012 with the aid of a whistle-blower inside Gallup, the Department of Justice filed a criminal complaint against Gallup for is overbilling the US Mint and False Claims Act violations. Gallup paid a $10.5 million fine. But in the end CEO Jim Clifton kept his job. Although he was barred from running Gallup’s government division, he soon installed his son Jon Clifton in that role. According to USASpending.gov, Gallup continues to engage in multi-million-dollar government contracts with various agencies.

However, Gallup polling is coming under increasing scrutiny. Gallup has been calling the wrong winner in election polling since trumpeting Thomas Dewey as the winner of the 1948 contest. Fordham ranked Gallup 17th of 23 in 2008, and Nate Silver found Gallup was the least accurate of 23 major firms in 2012. Gallup predicted a Hillary Clinton win up until the final results came in during the 2016 elections.

Gallup’s poll results revealing “high and growing American sympathy for Israel” are also wildly at odds with similarly and identically worded polls conducted by Pew Research and through Google Surveys. Nevertheless, a survey of news outlets reveals Gallup’s consistently sunny results are the most used of available polls.

Gallup launches its annual results early each year under titillating headlines such as "Americans Remain Staunchly in Israel’s Corner" (2018 poll) and “Israel Maintains Positive Image in US” (2017 poll). Gallup’s polls are immediately splashed across newspapers such as the New York Times and the Jerusalem Post and have even been used by the Government Accountability Office as a proxy to assert that Americans support unconditional US foreign assistance to Israel, long the highest recipient of any foreign country.

Many Israel lobby organizations and media outlets automatically recirculate Gallup polls in order to advance Israel’s public relations objectives. These include The Israel Project, the Jewish Telegraphic Agency, the American Jewish Committee, and pro-Israel scribes. Given the high value Gallup delivers to them through its impossibly inflated claims of American sympathy for Israel, it is reasonable to speculate that – consistent with its corporate culture – Gallup might have a long term contract or quid pro quo arrangement with one or more Israel lobby organizations, if not the Israeli government itself, conditioned on continually churning out highly positive results.

Gallup leveraged its self-proclaimed acumen as “the most trusted name in polling” to issue just enough tantalizing polling data to keep US Mint contracts flowing. Gallup seems to be pursuing the same strategy with its longer running unverifiable polling on US sympathy for Israelis over Palestinians. However, because of Gallup’s extremely incremental approach, at its current rate of "sympathy" increase, Gallup has until the year 2058 before alleged American sympathy for Israelis over Palestinians finally reaches an unsurpassable 100%. At that point, like the US Mint contract, the game will be up. That is, unless Americans stop believing unverified and widely divergent Gallup polling data.

Grant F. Smith is the director of the Institute for Research: Middle Eastern Policy in Washington and the author of the 2016 book, Big Israel: How Israel’s Lobby moves America which is now available as an audiobook.