Pat Buchanan’s new book, Churchill, Hitler, and the Unnecessary War: How Britain Lost Its Empire and the West Lost the World, is causing a stir, which is a good thing. Buchanan argues that both World War I and World War II were unnecessary wars; that Britain bears at least as much responsibility for both as Germany; that Winston Churchill was “the indispensable man” in reducing Britain from a world-encircling empire to “a cottage by the sea­to live out her declining years;” and that the consequence of the Western civil war that encompassed both World Wars (I would add the Cold War as well) has been the fall of the West.

Buchanan is correct on all counts. His book represents a counterattack in the necessary war, the war to introduce Americans to genuine history. At present, most Americans know only a comic-book version of history, one in which Germany deliberately started both World Wars as part of a drive to conquer the world, a drive stopped when valiant American armies defeated the German army. And, oh yes, some Brit named Churchill beat the Luftwaffe in the Battle of Britain. Thanks to the victories of the freedom-loving allies, we now live in the best of all possible worlds, where everyone can be a “democracy.” 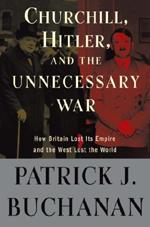 Nothing of the comic-book version of history is true, not even the Battle of Britain bit. Curiously, the key British records from the Battle of Britain remain classified “secret;” it seems the RAF was on the ropes. Buchanan goes after the rest of it with spirit and zest, demolishing it utterly. As Colonel House told Woodrow Wilson after talking extensively with Kaiser Wilhelm in 1915, the Kaiser neither wanted nor expected war. I have seen the last, desperate telegram he sent the Tsar, trying to avoid a general European war. He was mocked for years before the war by many Germans as the “Peace Kaiser” because in crisis after crisis he backed down. Kasier Wilhelm knew, as did Theodore Roosevelt, that a World War would cost the West its world dominance.

Because World War I was unnecessary, so was World War II, which was really a resumption of World War I. Buchanan goes further and argues that had Britain and France not offered a wildly imprudent guarantee to Poland in the spring of 1939, there would have been no war in the West. Hitler wanted to fight Stalin, not the Western powers. That too is true, but Buchanan makes one assumption I am not so sure of, namely that Germany would have defeated the USSR. As it was, World War II was fought mostly in the east, and it was the Red Army, not the comparatively small British and American armies, that defeated the Wehrmact. Could Stalin have done it alone? Maybe.

In both World Wars, the U.S. came out a winner because it left most of the fighting to others. In World War I, Germany was defeated by the (under international law, illegal) starvation blockade. The French army bore the brunt of the war in the west. Buchanan’s debunking of Churchill is thorough and valuable. Churchill was brilliant, forceful, imprudent, and often wrong. A howler for war both in 1914 and 1939, he may not have sought to preside over the dissolution of the British Empire, but it was his own fault he did so. Prudence, which means evaluating prospective actions in terms of their probable long-term effects, is conservatives’ first political principle, and the debacles created by Churchill illustrate why. At heart, he was far more Whig than Tory. Burke would have loathed him.

Buchanan’s historical revisionism is welcome on several counts. The neocons have elevated an unhistorical Churchill into the patron of interventionism, selling him in Washington and elsewhere like saints’ bones. It is a snare for the simple, with George W. Bush numbered among them.

Debunking comic-book history and replacing it with the real thing is vital if America is to avoid the dual trap of cultural Marxism and Brave New World. As ideologues and totalitarians everywhere have long known, if you can cut a people off from their past, you can do whatever you want with them. We need a similar debunking of the comic book history of the Civil War now fed to Americans, in which it was all about slavery.

Buchanan’s relevance comes from the sad fact that America is now duplicating Churchill’s central error, imprudence. We have entered into two wars with little thought for their long-term consequences. Washington hands out guarantees, similar to Britain’s to Poland, all over the world like penny candy, with no consideration of where they may lead. We give less thought to the potential future consequences of our actions than the average Mayfly. All that matters is receiving the applause of dunces and pleasing the SMEC.

Britain did the same thing twice, in 1914 and 1939. It is perhaps not too much to infer that Little England will be followed by Little America.