Was Iyad Allawi, America’s Iraqi sock-puppet and the country’s unelected “prime minister,” lying when he told the U.S. Congress:

“In Samarra, the Iraqi government has tackled the insurgents who once controlled the city. Following weeks of discussions between government officials and representatives, coalition forces and local community leaders, regular access to the city has been restored. A new provincial council and governor have been selected, and a new chief of police has been appointed. Hundreds of insurgents have been pushed out of the city by local citizens, eager to get with their lives. Today in Samarra, Iraqi forces are patrolling the city, in close coordination with their coalition counterparts.”

I guess that’s why American forces had already sealed off the city and launched air strikes, killing at least one child and one older woman, even before Allawi had opened his mouth. Nothing succeeds like success.

I doubt Allawi was consciously telling an untruth. The poor guy probably had no idea what was going on, and why should the Americans tell him? After all, he’s a general without an army. Does the quarterback huddle with the head cheerleader?

Allawi’s speech to the assembled dignitaries even had the cadences of a cheer, the kind your little sister practices in front of the mirror before the Big Game: 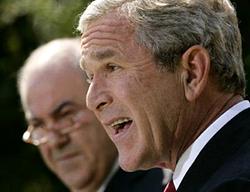 It’s just background noise. Nobody cares what Allawi says, because, if truly free and fair elections are ever held in Iraq, he’ll be gone, and if they aren’t held, and, instead, the country dissolves into civil war, he’ll be gone anyway. In any case, his government is officially characterized as “interim,” and the idea that he is going to come out ahead at the polls in January is just not credible – unless he manages to somehow manipulate the process, or else postpone the election on the grounds that the security situation requires it.

These two prospects clearly worry the real ruler of Iraq, the Grand Ayatollah Ali al-Husseini al-Sistani, as the New York Times reports this [Wednesday] morning. It was the Ayatollah, you’ll remember, who insisted on moving up the elections to begin with. As American forces consolidated their “victory,” and “mopped up” the “dead-enders,” the Coalition Provisional Authority was all set to impose a “caucus” system, in which their handpicked Iraqi servitors would come out the winners. They wrote a constitution, dictated by neocon ideologues in Washington, and the pro-war pundits hailed Iraq as a political laboratory in which a great experiment was proving that the neoconization of Iraq would be a successful model for the entire region. But Sistani, whose every word is listened to by Iraq’s Shi’ite majority as if it were holy writ, would have none of it: the caucus plan was shelved, and the final drafting of the constitution was put on hold. The Grand Ayatollah had spoken.

In the original plan, as conceived by the neoconservative authors of this misadventure, elections weren’t supposed to happen for years, or at least until the country was so totally pacified that they would even tolerate the installation of Ahmed Chalabi, but that changed, too, at Sistani’s insistence. A January date was set, but still Sistani is not satisfied, and he’s holding the threat of a boycott over the heads of the Americans, demanding an end to the advantages given to the exile parties – including huge subsidies from the U.S., and a ceiling of 55 percent on Shi’ite representation in the new government.

The Americans have little choice but to accede to his demands.

It was Sistani who intervened to save the holy city of Najaf, and placed himself between the American occupiers and the forces of Muqtada al-Sadr, the rebel firebrand the U.S. has vowed to capture and prosecute. Because of Sistani, Muqtada and his Sadrists have lived to fight another day. And that day may be coming sooner than the Americans imagine, even in their darkest prognostications.

In his speech to Congress, Allawi characterized the opposition to the U.S. occupation as follows:

“But there are the tiny minority who despise the very ideas of liberty, of peace, of tolerance, and who will kill anyone, destroy anything, to prevent Iraq and its people from achieving this goal. Among them are those who nurse fantasies of the former regime returning to power. There are fanatics who seek to impose a perverted vision of Islam in which the face of Allah cannot be seen. And there are terrorists, including many from outside Iraq, who seek to make our country the main battleground against freedom, democracy and civilization.”

To begin with, Allawi, as a “former” Ba’athist who only turned against Saddam when he fell out of favor, can fairly be identified with those nurturers of fantasy. Iraqis who would like to see some successor to the secularized Sunni Ba’athist party come into existence have only to look to the Iraqi National Accord, founded by Allawi and a few other dissident Ba’athist officers disenchanted with the cult of Saddam.

Furthermore, if any single group in Iraq can be characterized as a tiny minority, then surely it is the pro-Western, pro-occupation parties, including the National Accord, Chalabi’s Iraqi National Congress, and the Iraqi Communist Party. Sistani’s objection that the seculars will come to dominate the Shi’ite majority, and create an illegitimate government, is enough to sweep them aside, and threatens to derail the entire process.

A “tiny minority?” Every poll since last year has shown the overwhelming majority of Iraqis want us out, and the sooner the better. Sistani, reflecting the popular will, has the same view, but has so far refrained from demanding an American exit, leaving the Sadrists to take the path of jihad, or holy war.

So let Allawi blather on all he wants. While he is given standing ovations in Washington by our clueless and completely bought-off Congress, the real players are huddling on the field in Iraq, deciding the fate of that unfortunate nation. And Allawi, like the president he owes his office to, was never a player, only a cheerleader.

Some cheerleaders are prettier than others, and Allawi, it must be admitted, is decidedly indecorous. A ponderous speaker, he looks like a Soviet-era thug: yet another confirmation of George Orwell’s axiom that, after 40, everyone has the face they deserve. I wonder if any American reporters will be so bold as to ask Allawi, during his visit, about how it felt to shoot as many as six helpless prisoners, who were handcuffed and blindfolded. The Sydney Morning Herald reports that Allawi personally executed them with a pistol in a courtyard next to the Al-Amariyah security center in southwestern Baghdad. The deed was done days before his American patrons elevated him to power: the detainees, he declared on the spot, “deserved worse than death.”

Allawi is a smalltime hood, of no consequence other than being the temporary beneficiary of Washington’s factional wars: Chalabi, as the neocons’ pet, lost out when his patrons fell out of favor at the White House, and Allawi was the best we could do in a pinch. But make no mistake about it: the real center of power in Iraq is not Allawi’s government, or the political parties that join it, but in the office of the Grand Ayatollah. Even the Americans must come to Sistani on bended knee. Having made implacable enemies of the Sunni minority, they cannot afford to alienate the Shi’ite majority.

In 1935, when French Prime Minister Pierre Laval urged Joseph Stalin to go easy on the Church in Russia so as to enlist the Pope’s aid against the rising threat of Hitler, the Soviet dictator is said to have replied with derision: “The Pope? How many divisions has he got?”

Today, the Pope’s divisions, having run the Red Army out of Poland, are rightly given much of the credit for destroying the Evil Empire that Stalin extended into Eastern Europe, and ultimately overthrowing his successors in the Kremlin.

Will America’s Middle Eastern Empire suffer the same fate at the hands of a Muslim Pope? The power of religion has lately been underestimated in the West, enamored as it is with the alleged invincibility of “modernity.” The Americans, already burdened with an unwillingness to learn from history, show every sign of repeating Stalin’s fatal error.

I‘ll be speaking at the 2004 Freedom Summit, on Saturday, October 9, in Phoenix, Arizona, at the Best Western Grace Inn at Ahwatukee from 2:45 pm – 3:45 pm. They have a great line-up of speakers, including our own Alan Bock, the learned George H. Smith, legendary financial analyst Doug Casey, Jim Peron, head of an exciting new libertarian thinktank in New Zealand, and other stars in the libertarian firmament I don’t have room to list. In any case, the whole two-day package – at $175 – is well worth it.