Beneath the thin plastic veneer of American society, rage roils around the irrationality of life in the Empire, and occasionally it boils over. As it did in Hollywood, Florida, the other day, when Carlos Arredondo “snapped,” as the news reports put it: 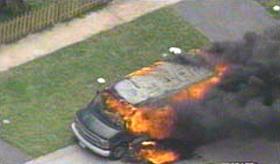 “And when they told him Wednesday afternoon that his Marine son, Lance Cpl. Alexander Arredondo of Randolph, Mass., had been killed in combat in Iraq, police say Carlos Arredondo simply snapped. Arredondo climbed into the Marine Corps van parked outside his home and set it ablaze, suffering severe burns.”

The distraught dad had grabbed a propane torch and a can of gasoline, torched the Marines’ van, and then hurled himself into the flames. He was pulled from the burning vehicle, but is now in serious condition, with burns over half of his body. 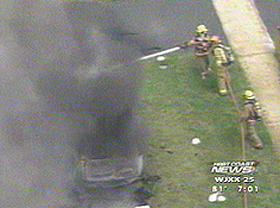 Mrs. Arredondo, in an interview on ABC’s Good Morning America, had an explanation:

“This is his scream that his child is dead. The war needs to stop.”

ABC News reports that it is “unclear” whether or not Arredondo will face charges. Meanwhile, our two presidential candidates continue to debate the war … the war in Vietnam, that is. You know, the one that ended over thirty years ago.

And it isn’t even about the war, per se, but one man’s experience of it. The race for the White House will apparently be decided on the life-or-death issue of: did John Kerry ever spend Christmas in Cambodia – or was it right across the border in Vietnam?

There is a surreal quality to our national discourse: as if it’s being stage-managed by Rod Serling.

While we’re on the subject of surrealism, how about those Republicans? First they invade Iraq, and now New York City. No protests are allowed, of course, but the New York Daily News has the scoop: “Anarchists hot for mayhem.” Leave it to the Big Rotten Apple’s second worst tabloid to come up with a headline that reads like an ad in the personals column. The “story” beneath it isn’t much better:

“Fifty of the country’s leading anarchists are expected to be in the city for the Republican National Convention, and a handful of them are hard-core extremists with histories of violent and disruptive tactics, according to police intelligence sources.”

Say, what?!? Fifty of “the country’s leading anarchists,” and they didn’t invite me – the biographer and longtime associate of one of the most well-known and certainly the most thoroughgoing anarchist of them all? What’s up with that?

But, oh wait, I’m kinda glad they didn’t invite me, come to think of it, because look what they’re planning:

“Police said each of the 50 have up to 50 followers who are willing to be arrested during disturbances at the convention. This group, police say, is expected to engage for the most part in civil disobedience, including sit-ins in front of delegates’ buses. They also may stage more direct-action tactics, such as vandalizing McDonald’s and Starbucks.”

Gee, if “followers” are the same as regular readers, then those alleged “leading anarchists” sure missed out when they didn’t invite me to their party: I must have at least 100. Of course, maybe they snubbed me because I’ve written about the self-indulgent narcissism of antiwar protesters who plonk themselves down in traffic and make everybody – warmongers and peaceniks alike – late for work. But their efforts in New York City to block traffic may prove entirely redundant, and could even go unnoticed. Traffic gridlock is the norm in Manhattan, and the convention will multiply that times ten.

As for trashing McDonald’s and Starbucks – the former I can see. Although I don’t endorse any violation of private property rights, or any form of coercion, no matter who is the target, on grounds of sheer tackiness McDonald’s is certainly asking for it. And the “food”! Yech!

But why go after Starbucks, of all places? After all, where else will we go to log on to “pirate” websites when the U.S. government seizes control of all communications? Instead of having to go through government-regulated wires – which the evil Ashcroft will connect to “content-filters,” that filter out all “subversive” websites – we do an end-run around the State by bouncing a signal off a satellite. Outfitted with T-Mobile wireless internet communications, Starbucks will keep us free!

So lay off Starbucks, you clueless Commie twerps. The main enemy is the State.

Be that as it may, who are these dreaded “anarchists” the Daily News is in such a lather about? Hmmm, let’s see:

“For example, NYPD intelligence reports say Kazi Toure, a Black Panther from Boston also known as Christopher King, convicted in the 1980s of conspiracy to overthrow the government, and with arrests for bank robbery and transporting firearms, was observed training younger militants in weapons use.”

Since the Black Panther Party disbanded sometime in the 1970s – or, rather, was forcibly disbanded by the U.S. Government – I wonder if the source of these “intelligence reports” is Ahmed Chalabi.

And, gee whillikers, I also wonder (if this is the same Kazi Toure) what someone who worked for the American Friends Service Committee – a pacifist organization, run by Quakers – is doing “training younger militants in weapons use.” Of course, I heard Dick Cheney, the other night, telling a rally of Bush supporters that his administration will continue to “defend the right to keep and bear arms.” So maybe Mr. Toure was training a group of Young Republicans.

“A 20-year-old New Yorker who allegedly leads ‘The Organization’ is advocating shutting down the Brooklyn Bridge, and hurling bricks followed by Molotov cocktails through the windows of military recruiting stations, according to these reports. The man has four minor arrests for nonviolent offenses and the Daily News is withholding his name.”

“The Organization,” eh? What an imaginative moniker! Was that because “The Group” is already taken? One wonders if author Patrice O’Shaughnessy is angling to be snatched up by the Weekly World News: I mean, this woman has real talent, as the following attests:

“Richard Picariello, 55, a ’70s radical in the Boston area, a one-time member of the Fred Hampton Unit of the People’s Army, named for a slain radical, also is known to be active in current causes. ‘He has been talking to groups … recruiting others into extreme measures,’ said a high-ranking police source.”

He’s “talking”! Hey, isn’t that a violation of McCain-Feingold? Arrest that man!

And we’ll have no “extreme measures” in this country – unless, of course, they’re taken by the government. Okay, so Mr. Picariello did some time in a federal prison: it happens to the best of us. Since his release, however, we learn that “he has been involved in various groups, and has arrests for minor offenses such as refusing to move out of the way of President Bush’s motorcade in Boston last March.”

My favorite “anarchist” fiend, however, is this guy:

“Jaggi Singh, 32, a Canadian citizen, is known for allegedly setting off hoax devices to detour police resources. He allegedly catapulted teddy bears soaked with gasoline at police at the Quebec G-20 protest in 2001, according to NYPD reports.

“A member of the International Solidarity Movement, or ISM, he was seen shooting a handgun, and allegedly received firearms training from Toure, according to a police source.”

Besides having a really cool first name, you have to wonder about those teddy bears: did he light them, or just soak them in gasoline? (No mention of flaming teddy bears in this account). The key “crime” committed by Mr. Singh, however, seems to be his membership in the ISM group: in New York, pro-Palestinian = pro-terrorist, at least as far as the tabloids are concerned. So that alone is considered sufficient grounds for smearing him as a potential “terrorist.”

But then, that “firearms training” stuff is highly suspicious: I’ll stick with my theory that both he and Toure are really closet Republicans.

Pardon my facetious tone, but one can’t stay semi-sane and take much of what passes for political discourse in America seriously. I wanted to illustrate, in this column, the utter meaninglessness of our national “debate,” the complete disconnect between what we hear on television and read in the newspapers and what is really going on, and in the course of that I’ve veered from the tragic to the absurd in a little over a thousand words – and that about says it all, now doesn’t it?