BAGHDAD – An eyewitness commentary to IPS through a U.S. raid on a Baghdad mosque Friday gives a vivid picture of what a "successful raid" can be like.

U.S. soldiers raided the Abu Hanifa mosque in Baghdad during Friday prayers, killing at least four and wounding up to 20 worshippers.

“Everyone was there for Friday prayers, when five Humvees and several trucks carrying INGs entered,” Abu Talat told IPS on the phone from within the mosque while the raid was in progress. “Everyone starting yelling ‘Allahu Akbar’ (God is the greatest) because they were frightened. Then the soldiers started shooting the people praying!”

Talat said he was among a crowd of worshippers being held back at gunpoint by U.S. soldiers. Loud chanting of “Allahu Akbar” could be heard in the background during his call. Women and children were sobbing, he said.

“They have just shot and killed at least four of the people praying,” he said in a panicked voice. “At least 10 other people are wounded now. We are on our bellies and in a very bad situation.”

Talat gave his account over short phone calls. He said he was witnessing a horrific scene.

“We were here praying and now there are 50 here with their guns on us,” he said. “They are holding our heads to the ground, and everyone is in chaos. This is the worst situation possible. They cannot see me talking to you. They are roughing up a blind man now.” He evidently could talk no further then.

The soldiers later released women and children along with men who were related to them. Abu Talat was released because a boy told him to pretend to be his father. 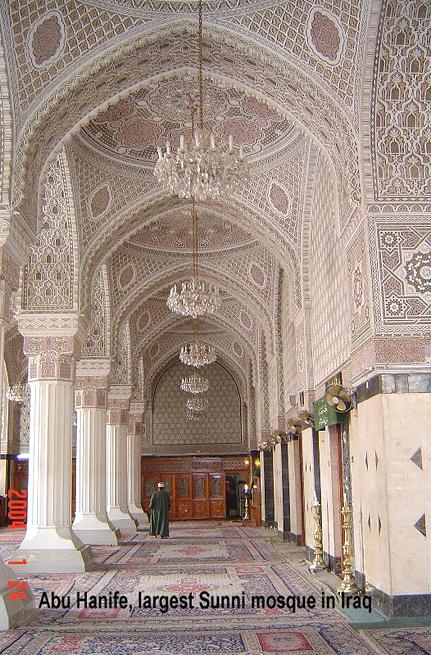 Abu Hanife Mosque as it looked at the beginning of the year.
Photo courtesy of Mike Ferner.

Other witnesses gave similar accounts outside the mosque. “People were praying and the Americans invaded the mosque,” Abdulla Ra’ad Aziz from the al-Adhamiya district of Baghdad told IPS. He had been released along with his wife and children. “Why are they killing people for praying?” He said that after the forces entered “they went to the back doors and we heard so many bullets of the guns – it was a gun bigger than a Kalashnikov. There were wounded and dead, I saw them myself.”

Some of the people who had been at prayer were ordered by soldiers to carry the dead and wounded out of the mosque, he said.

“One Iraqi National Guardsmen held his gun on people and yelled, ‘I will kill you if you don’t shut up,'” said Rana Aziz, a mother who had been trapped in the mosque.. “So they made everyone lie down, then people got quiet, and they took the women and children out.”

She said someone asked the soldiers if they would be made hostages. A soldier used foul language and asked everyone to shut up, she said. Suddenly, she laughed amid her tears. “The Americans have learnt how to say shut up in Arabic, ‘Inchev.'”

Soldiers denied Iraqi Red Crescent ambulances and medical teams access to the mosque. As doctors negotiated with U.S. soldiers outside, more gunfire was heard from inside.

About 30 men were led out with hoods over their heads and their hands tied behind them. Soldiers loaded them into a military vehicle and took them away around 3:15 p.m.

A doctor with the Iraqi Red Crescent confirmed four dead and nine wounded worshippers. Pieces of brain were splattered on one of the walls inside the mosque while large blood stains covered carpets at several places.

A U.S. military spokesperson in Baghdad did not respond to requests for information on the raid.