She lays dazed in the crowded hospital room, languidly waving her bruised arm at the flies. Her shins, shattered by bullets from U.S. soldiers when they fired through the front door of her house, are both covered by casts. Small plastic drainage bags filled with red fluid sit upon her abdomen, where she took shrapnel from another bullet.

Fatima Harouz, 12 years old, lives in Latifiya, a city just south of Baghdad. Just three days ago soldiers attacked her home. Her mother, standing with us, says, "They attacked our home and there weren’t even any resistance fighters in our area." Her brother was shot and killed, and his wife was wounded as their home was ransacked by soldiers. "Before they left, they killed all of our chickens," added Fatima’s mother, her eyes a mixture of fear, shock, and rage.

A doctor standing with us, after listening to Fatima’s mother tell their story, looks at me and sternly asks, "This is the freedom … in their Disney Land are there kids just like this?"

Another young woman, Rana Obeidy, was walking home with her brother two nights ago. She assumes the soldiers shot her and her brother because he was carrying a bottle of soda. This happened in Baghdad. She has a chest wound where a bullet grazed her, unlike her little brother who is dead.

Laying in a bed near Rana is Hanna, 14 years old. She has a gash on her right leg from the bullet of a U.S. soldier. Her family was in a taxi in Baghdad this morning that was driving near a U.S. patrol when a soldier opened fire on the car.

Her father’s shirt is spotted with blood from his head, which was wounded when the taxi crashed.

In another room, a small boy from Fallujah lies on his stomach. Shrapnel from a grenade thrown into their home by a U.S. soldier entered his body through his back, and implanted near his kidney.

An operation successfully removed the shrapnel. His father was killed by what his mother called "the haphazard shooting of the Americans." The boy, Amin, lies in his bed vacillating between crying with pain and playing with his toy car.

It’s one case after another of people from Baghdad, Fallujah, Latifiya, Balad, Ramadi, Samarra, Baquba, from all over Iraq, who have been injured by the heavyhanded tactics of American soldiers fighting a no-win guerilla war spawned from an illegal invasion based on lies. Their barbaric acts of retaliation have become the daily reality for Iraqis, who continue to take the brunt of the frustration and rage of the soldiers.

Out in front of the hospital three Humvees pull up as soldiers alert the hospital staff that some of the wounded from outside of Fallujah will be brought there. One of the staff begins to yell at the soldier who is doing the talking, while a soldier manning a machine gun atop a Humvee, with his face completely covered by an olive balaclava and goggles, looks on.

"We don’t need you here! Get the f*ck out of here! Bring back Saddam! Even he was better than you animals! We don’t want to die by your hands, so get out of here! We can take care of our own people!"

The translator with the soldiers does not translate this. Instead he watches with a face of stone. 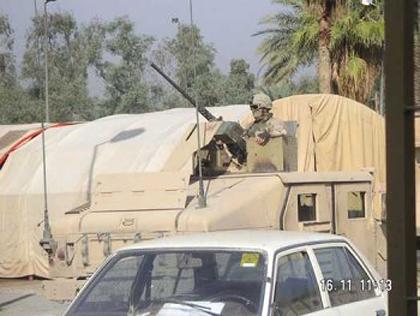 Soldier in front of hospital in Baghdad.

The survivors of those killed and wounded by the U.S. military in Iraq, as well as those who care for them, are left with feelings of bitter anguish, grief, rage, and vengeance.

This afternoon at a small but busy supply center set up in Baghdad to distribute goods to refugees from Fallujah, the stories the haggard survivors are telling are nearly unimaginable.

"They kicked all the journalists out of Fallujah so they could do whatever they want," says Kassem Mohammed Ahmed, who just escaped from Fallujah three days ago. "The first thing they did is they bombed the hospitals because that is where the wounded have to go. Now we see that wounded people are in the street and the soldiers are rolling over them with tanks. This happened so many times. What you see on the TV is nothing – that is just one camera. What you cannot see is so much."

While Kassem speaks of the television footage, there are also stories of soldiers not discriminating between civilians and resistance fighters.

While distributing supplies to other refugees he says, "There are dead bodies on the ground and nobody can bury them. The Americans are dropping some of the bodies into the Euphrates River near Fallujah. They are pulling the bodies with tanks and leaving them at the soccer stadium."

Nearby is another man in tears as he listens, nodding his head. He can’t stop crying, but after a little while says he wants to talk to us.

"They bombed my neighborhood, and we used car jacks to raise the blocks of concrete to get dead children out from under them."

Another refugee, Abu Sabah, an older man wearing a torn shirt and dusty pants, tells of how he escaped with his family while soldiers shot bullets over their heads, but killed his cousin.

"They used these weird bombs that put up smoke like a mushroom cloud," he said, having just arrived yesterday. "Then small pieces fell from the air with long tails of smoke behind them. These exploded on the ground with large fires that burned for half an hour. They used these near the train tracks. You could hear these dropped from a large airplane and the bombs were the size of a tank. When anyone touched those fires, their body burned for hours."

The comparison of Iraq to Vietnam is becoming more valid by the day here.