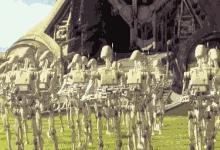 "That all goes to show that wars are not won through newspaper articles, but rather with ideas, soldiers, weapons and munitions. A people wins when it has the prerequisites to victory, when it wants to win and when it must win. All that is true for us. This evening we look back along the path we have followed…"

Let us never forget this moment, and let no future generations look back with fury and despair at the path we have followed, thinking that nobody noticed or cared that the Pentagon was building an army of metallic soldiers for the War of Terror. We shuddered when we saw the unstoppable robotic killers, devoid of faces and free of compassion, in Attack of the Clones; but that was long ago and far away, or so it seemed. The most fearsome thought imaginable – and we were so glad it was only science fiction – would be an army of storm troopers devoid of human eyes, hearts, or souls.

But as the New York Times explains, "robo-soldiers" are already a reality:

"A prototype, about four feet high, with a Cyclops eye and a gun for a right arm, stood in a workshop at the center recently. It readied, aimed and fired at a Pepsi can, performing the basic tasks of hunting and killing."

"Within 10 years, [an Army robotics expert] said, convoys of robots should be able to wend their way through deep woods or dense cities." 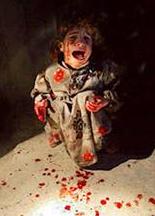 "The technology still runs ahead of robot rules of engagement. ‘There is a lag between technology and doctrine,’ said [Robert] Finkelstein of Robotic Technology, who has been in the military robotics field for 28 years. ‘If you could invade other countries bloodlessly, would this lead to a greater temptation to invade?’" (Emphasis added.)

We are living in what fundamentalists and neocons fondly call "the end times," but what psychologists and theologians call the culture of death. In trying to understand why men delight in war, Freud wrote that Thanatos (unlike Eros, love of life) is the love of death, a self-destructive yet powerful attraction to death’s power to bring "peace."

The Bush administration is head over heels in love with death, and American culture is changing rapidly in response. When influential men in the U.S. military and the mainstream media call killing "a hoot" and torture "a fraternity prank" without losing their jobs, the veneer of "moral values" and "Christian principles" chips away, revealing what lies beneath. 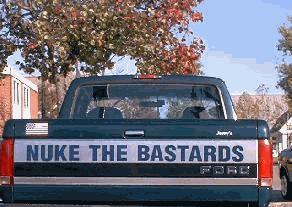 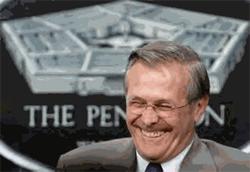 "’They’re not afraid. They don’t forget their orders. They don’t care if the guy next to them has just been shot,’ Johnson said. ‘Will they do a better job than humans? Yes.’"

"Money, in fact, may matter more than morals. The Pentagon today owes its soldiers $653 billion in future retirement benefits that it cannot currently pay…"