Mao Zedong became the symbol of the communist revolution in China. Leading the famed Long March, proclaiming the new People’s Republic of China, sending forth Red Guards waving a little red book of his quotations, meeting Richard Nixon when the two governments ended decades of unremitting hostility. And killing tens of millions of Chinese.

Mao is one of the greatest mass murderers in human history, on par with Joseph Stalin and Adolf Hitler. The numbers simply boggle. Writes French researcher Jean-Louis Margolin in The Black Book of Communism:

“Although the estimates are quite speculative, it is clear that there were between 6 million and 10 million [non-battle] deaths as a direct result of the Communist actions, including hundreds of thousands of Tibetans. In addition, tens of millions of ‘counterrevolutionaries’ passed long periods of their lives inside the prison system, with perhaps 20 million dying there. To that total should be added the staggering number of deaths during the ill-named Great Leap Forward – estimates range from 20 million to 42 million dead for the years 1959-1961 – all victims of a famine caused by the misguided projects of a single man, Mao Zedong, and his criminal obstinacy in refusing to admit his mistake and to allow measures to be taken to rectify the disastrous effects.”

These crimes were Mao Zedong’s crimes. The man known as the “Red Emperor” effectively ruled China for 27 years. He routinely disposed of rivals and successors, even inaugurating the so-called Cultural Revolution in 1966 as a means to eliminate party rivals, most notably Liu Shaoqi, whom Mao had chosen to be State Chairman, or head of state. Writes Gao Wenqian, an official biographer of the Chinese Communist Party: Liu “was a threat to the supremacy of Mao, who decided that when the right moment presented itself he would have to destroy this Chinese Khrushchev.” 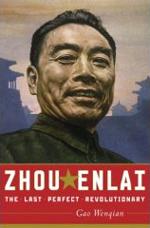 However, Mao obviously could not have done so much damage and killed so many people without the aid of others. Liu was one – a long-time party crony who fell afoul of Mao’s ambitions. Another was Lin Biao, Liu’s successor as Mao’s heir apparent, only to die while attempting to flee the country. Also Deng Xiaoping, a loyal communist revolutionary, purged during the Cultural Revolution, recalled to Beijing only to be purged again, who achieved paramount power after Mao’s death, when he led his country back to the world.

Finally, there was Zhou Enlai. Zhou was China’s face to the world, the premier who engineered the rapprochement between Beijing and Washington. He was the competent pragmatist who attempted to bridge the gap between cynical political maneuvering and practical policymaking in the desperately poor nation.

And he was Mao’s enabler, serving one of history’s greatest moral monsters for decades.

Gao has produced an important book for anyone seeking to understand revolutionary China and the country that has resulted. Gao was with the Central Research Office for Documentation where he served as Zhou’s official biographer. Gao emigrated to the U.S. in 1993 and currently works for Human Rights in China. He was able to sneak his research out of the PRC, which led to this volume.

Zhou Enlai offers an inside look at one of the most important Chinese revolutionaries. Zhou began as a student activist who spent time in Europe. He quickly rose to a leading position in the party, for a time looming over Mao. Although Mao eventually achieved party primacy, Zhou’s influence remained significant. Most critically, Zhou became a loyal lieutenant of Mao, and thus an implementer of Mao’s policies.

"As a student of acting, he knew how to master the role he was handed. For years, he had been performing the important part of the indispensable servant to perfection, much to the annoyance of Mao, his master. He was almost entirely self-effacing. He knew how to mend the broken pieces of crockery that Mao shattered from time to time. Zhou’s genius for self-abnegation and the deft and artful way that he had of cleaning up a nasty mess aggravated Mao, the master, and piqued his pride. They were the odd couple, but this was no domestic comedy."

Reading Zhou leaves one frustrated by yet another example of the banality of evil. There is nothing to suggest that Zhou was filled with blood lust, enjoyed killing supposed counter-revolutionaries, plotted to imprison tens of millions of regime opponents, or was indifferent to the mass starvation and hardship around him. Indeed, he counseled colleagues and protected them, to the degree possible, from the madness of the Cultural Revolution, essentially an intra-party civil war which ruined the lives of millions of people, including many loyal communist apparatchiks. Like Stalin’s purges, the Cultural Revolution was bloody – estimates of the number of dead start at around 500,000 and top out at three million – and was no less mad, convulsing China for years.

Throughout everything, however, Zhou acted as Mao’s chief retainer, a state functionary who helped turn his impoverished nation into a vast prison camp. To have resisted obviously would have been dangerous, but Zhou’s influence within the party was enormous and he could have allied with other critics of Mao, especially after the evident disaster of the Great Leap Forward. But to do so would have been risky, and risk was something Zhou avoided at all costs.

As disagreements increased between Mao and Liu Shaoqi, for instance, Zhou ran in the other direction. Writes Gao: “Zhou was unwilling to get directly involved in the conflict, but he tried his best to regulate the tension as it boiled up between the Party and state chairman. Refusing to align himself with either of these political titans, Zhou employed his fabled Confucian strategy and tried to find a middle way.”

This act of political cowardice may have kept Zhou off of Mao’s hit list during the ensuing Cultural Revolution. But by refusing to oppose Mao, Zhou made the Cultural Revolution possible. And, fittingly, perhaps, Mao returned the favor of Zhou’s loyal service by impeding Zhou’s treatment for bladder cancer, leading to Zhou’s premature death in 1976. Only Mao’s death later that year allowed China to return to a degree of normalcy.

How to assess Zhou Enlai? He seemed to embody a sense of personal decency, treating his family, friends, and colleagues well, in contrast to the vindictive, licentious, and unpredictable Mao. Zhou also sought prosperity and stability for China – a communist China, to be sure, but nevertheless one in which people would no longer be starving. A perception that Zhou cared about those ruled by Beijing generated spontaneous popular mourning after his death, even though Mao did not attend the funeral. An ally of Deng Xiaoping’s as the Cultural Revolution came to a close, Zhou probably would have approved of Deng’s reforms that put the PRC on its current course.

But. Zhou was complicit in the activities of a regime which embodied the worst human vices. Zhou refused to oppose those who caused so much horror. Whatever Zhou theoretically wanted for the Chinese people, his support for Mao and Mao’s policies consigned tens of millions to death and hundreds of millions to unimaginable hardship.

With his book Zhou Enlai, Gao has given us a look into Zhou the person, as well as the communist revolution and Maoist state. The resulting read is simultaneously interesting and depressing. Nevertheless, it is a necessary read. People should never forget the 20th century’s monstrous communist death states.