Jeane Kirkpatrick, who served as UN ambassador under President Ronald Reagan, was commonly viewed as the godmother of neoconservatism. Yet when she died last year she had left the American Enterprise Institute, the think tank most closely identified with the Bush administration’s neocon agenda of promiscuous war. Among other things, Institute officials reportedly urged her not to publish Making War to Keep Peace. 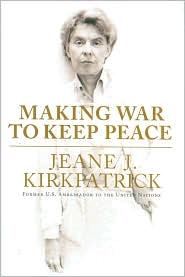 It turns out Kirkpatrick is no modern neocon. Although she was an unrepentent hawk during the Cold War – containing the Soviet Union, for example, was always a priority – she had few illusions about spreading democracy by force.

In her view, democracy is a worthy objective. Even during the Cold War, she writes, “our commitment had always been to the spread of democracy in the world. We had been promoting development, peace, and prosperity worldwide all along.”

But this goal was to be achieved “in ways consistent with our resources.” She viewed several recent interventions, including Iraq, as mistakes. Although she did not want to become the focus of opposition to President George W. Bush, she sharply criticized his Mideast policy.

In Making War to Keep Peace, Kirkpatrick runs through the major post-Cold War conflicts. Although she is too willing to use force, in my view, she consistently offers a sober and serious analysis of international conflicts. She is no naive, ivory-tower warmonger, like so many of today’s neocons, filled with hubris about transforming a world about which they know little. She consistently places defending American national interests first.

She begins with Gulf War I: “The story of how President George H.W. Bush and the United States responded to this foreign policy challenge is a chronicle of the birth of the new world order. It raises the fundamental questions of how the United States decides what is in its national interest, when it should use military force, the nature of our relationship with the United Nations and the world, and how long our responsibilities to a nation or people persist after military intervention.” All of these questions recur today.

She backed that war: “it was a clear-cut case of aggression, and Bush had to act.” However, she felt somewhat uncomfortable at President Bush I’s abandonment of three traditional international principles: “the inviolability of state sovereignty, the prohibition against intervention in the internal affairs of states, and the illegitimacy of force in international relations.”

As a result, the U.S. began intervening overseas despite the lack of clear national interests. She adds: “The Bush and Clinton administrations saw almost no limits to U.S. involvement; they conceived the United States as potentially engaged everywhere in the world, as needed. Both presidents sought to deal with international crises through multilateral action coordinated through the UN.”

Humanitarianism was the sole argument. Although the objective of delivering food might seem simple, she explains, “achieving it was not. The relief effort was hampered by war and anarchy, by the need to protect relief workers, by the lack of a government in Somalia, and by [UN Secretary-General] Boutros-Ghali’s desire to limit U.S independence in the use of force and establish a central role for himself in this and other such international operations.”

Kirkpatrick reviews the rest of the sordid tale – how the American role switched to de facto counter-insurgency work, which led to the botched raid in Mogadishu, which in turn led to a U.S. withdrawal. Kirkpatrick offers a typically restrained judgment of the intervention:

“UNITAF, George Bush’s mission to deliver food and medicine to a starving Somalia, was successful. UNOSOMII, undertaken by the Clinton administration and the UN, and aimed at nation building, was a predictable failure that was abandoned after unexpected casualties. Like the phrase ‘Vietnam syndrome,’ ‘Mogadishu massacre’ had different meanings for different commanders. To some allies, it meant that Americans could not take casualties. To some, it referred to the need to avoid becoming involved in internal conflicts among factions.

"All aspects of the Somalia experience had violated both the traditional Hammarskjold rules of peacekeeping and the lessons of Vietnam,. Soon American troops would depart for Bosnia where UN forces were applying some – but not all – of the lessons learned in Somalia.”

The occupation of Haiti, Kirkpatrick argues, was similar to that of Somalia. She writes: “In the case of Haiti, the U.S. government adopted the notion that democracy is a human right, and that the United States is responsible for protecting or restoring it around the world, regardless of the costs or whether American interests are at stake. This experience showed the danger of assuming – naively, with insufficient planning and resources – that democracy can be imposed on a historically lawless and chaotic nation.”

At least Haiti was not as costly in human lives as was Somalia. But so counterproductive was Clinton’s intervention that the U.S. returned a decade later to remove from power – and send abroad – Jean-Bertrand Aristide, the leader installed by President Clinton. She concludes: “I was pessimistic in the 1990s about the prospects for democracy in Haiti. Today, I am not much more sanguine – not when the cultural, social, and economic foundations of genuine democracy are still missing there.”

Kirkpatrick views America’s Balkans interventions differently, which results in the least satisfactory part of the book. For instance, she argues that “an aggressive, expansionist, violent leader in Serbia unleash[ed] mass murder once again in the very heart of Europe.” But that statement is wrong on every count.

The Balkans is at the periphery rather than the heart of Europe, and its collapse, though a humanitarian tragedy, did not threaten Europe’s stability. Serbia’s Slobodan Milosevic was a nasty piece of work, but the successive declarations of independence by Slovenia, Croatia, and Bosnia, which threatened both the territorial integrity of Yugoslavia and the safety of the respective minority ethnic Serbian communities, helped trigger civil war.

There were atrocities, to be sure, but battlefield action was the biggest killer. There certainly was no “genocide,” as Kirkpatrick claims at one point. Moreover, the slaughter and ethnic cleansing ran both ways – the Serbs might have been the most brutal, but their opponents were quick learners. And there is plenty of reason to doubt Kosovo’s readiness for self-government, given the treatment accorded its Serb minority by the ethnic-Albanian majority.

Finally, there is Iraq. Kirkpatrick is ever cautious. She explains:

“Throughout my career, I have been careful not to criticize any sitting president, and I was not inclined to change my position in that regard when President George W. Bush sent troops across the border of Iraq. In fact, when asked, I even agreed to defend his actions. I believed then as I believe now that President Bush had the legal right to invade Iraq, if not entirely for the reasons his administration claimed. However, I also believe that he had neither the obligation nor the need to expand his military offensive into Iraq after sending troops into Afghanistan."

Vocal critics of the war might find her attitude maddening – if the war was a mistake, she should have added her distinctive voice while there was a chance to prevent the president from making such an egregious error. Nevertheless, even now her measured criticism is a serious blow against the administration. For instance, she indicates particularly strong opposition to “the Bush administration’s argument for the use of military force for preemptive self-defense.”

Worse, though, has been the administration’s misguided attempt at nation-building. She says: “what we face in Iraq today is a vacuum of power, a lack of stable institutions needed to govern, and the problem that the promise of democracy for which our nation stands may be lost in the essential scramble for safety and stability in the streets. This is one of the reasons I am uneasy about the war we have made here – for we have helped to create the chaos that has overtaken the country, and we may have slowed rather than promoted the pace of democratic reform.”

She also complains that “some of the lessons learned from the first Gulf war were missed,” particularly sticking around in an attempt to transform a nation which “lacked practically all the requirements for a democratic government: rule of law, an elite with a shared commitment to democratic procedures, a sense of citizenship, and habits of trust and cooperation.” Responsibility for this failure must be placed on administration officials who “did not seem to have methodically completed the due diligence required for reasoned policy-making because they failed to address the aftermath of the invasion. This, of course, is reflected by the violence, sectarian unrest, ethnic vengeance and bloodshed we see in Iraq today.”

Quite a judgment of Bush administration policy by one of the original neoconservatives.

Jeane Kirkpatrick backed use of the U.S. military to advance fundamental national interests. But she was skeptical of employing force to advance utopian humanitarian ends. “Of course, it is reasonable that those of us who enjoy the benefits of freedom are motivated to remember the millions who do not,” she writes in Making War to Keep Peace.

But, she adds, “it is a different matter entirely to commit military resources to keep peace in such areas, where often no peace can be kept, or to build nations in our own image before they are ready for our freedoms – or even want them.” Indeed, Kirkpatrick closes her book with a plea for America to look to nonmilitary factors to change the world: “we must remember that historic conflicts between enemies can be won on moral force, without firing a single bullet or missile.”

No wonder Kirkpatrick and her one-time political allies parted company. She advocates an active foreign policy, but one in which the use of military force is constrained by experience, knowledge, and humility. That is, of course, a vastly different approach from the one which dominates Washington policy-making today.