Why are some countries democracies? Why are others dictatorships? The answers obviously are complex. History, culture, tradition, and accident all play a role. So does economics.

“To understand why some countries are democracies whereas others are not, it is useful to distinguish between different characteristic paths that political institutions take over time. Only some of these paths end in democracy, at least at this moment in time. These stylized paths help us to orient ourselves among the complexities of real-world comparisons, and they illustrate the main mechanisms that we believe link the economic and political structure of a society to political institutions.” 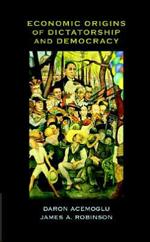 Economic Origins is a dense book, buttressed by the sort of math-heavy econometric analysis that helped steer me away from getting a PhD in economics. Nevertheless, the authors review different political paths, assess the effect of various economic factors, and develop a useful theory of political democratization. Although at times a tough read, the book is a valuable resource, yielding a better understanding of why countries take such wildly divergent political paths.

The obvious example of a “consolidated” democracy is Great Britain. Democracy emerges and solidifies. We take such a process for granted, but Acemoglu and Robinson point to Argentina as an “unconsolidated” democracy: government of, by, and for the people supposedly arises, and then collapses. Sometimes the process recurs again and again.

The authors divide undemocratic states into two categories. One is systems where nations are reasonably prosperous and egalitarian, so people generally find the status quo to be acceptable – Singapore, for example. Then there are nations where the inequality and exploitation are so great, as in South Africa before the collapse of the Apartheid regime, “which makes the prospect of democracy so threatening to political elites that they use all means possible, including violence and repression, to avoid it.”

The story of democratization typically involves elites versus citizens. But there is an enormous amount of complexity to that struggle, which the authors explore. One of their more important points is that the lack of de jure power does not mean that the disenfranchised lack de facto power. Write Acemoglue and Robinson: “In nondemocracy, the elites monopolize de jure political power but not necessarily de facto political power. The citizens are excluded from the political system in nondemocracy, but they are nonetheless the majority and they can sometimes challenge the system, create significant social unrest and turbulence, or even power a serious revolutionary threat.”

It is the threat of revolution that often compels political reform, and it is the fact that revolution is expensive even to the winners that causes citizens to accept democracy as a sufficient concession, argue the authors. They conclude: “This story of democratization as a commitment to future pro-majority policies by the elites in the face of a revolutionary threat and, perhaps more important, as a commitment made credible by changing the future distribution of political power is consistent with much historical evidence.”

This hypothesis helps explain not only why democracy, but when democracy. For instance, why did democratic, or at least semi-democratic, regimes arise in Europe during the 19th century? The authors suggest that rural-based societies are less susceptible to revolution: by making revolution more feasible, “the combination of increased urbanization and factory employment may have been a key factor in initiating the wave of democratization in nineteenth-century Europe.”

They certainly make a strong argument, and the threat of popular unrest obviously has been a significant factor in impelling elites to broaden political decision-making. Yet there usually have been elites who backed democracy in one form or another for reasons of principle. Acemoglu and Robinson acknowledge the existence of “ideological changes that occurred during the Enlightenment, the French Revolution, and the U.S. War of Independence” which challenged the existing order, but assert that “Democracy is usually not given by the elite because its values have changed.”

Unfortunately, the authors devote inadequate attention to this issue. Economic Origins would have been more interesting had the authors attempted to assess whether the threat of revolution was not only necessary, but also sufficient, to achieve political change. Or was ideological change an important issue as well?

The authors focus on the economic determinants of political change. They find a complicated relationship, a U-shaped curve, of democracy with inequality. Acemoglu and Robinson write:

“With low inequality, we would tend not to observe democracy. At higher levels of inequality, we would still not observe democracy because nondemocracies can maintain their power by engaging in temporary policy concessions to defuse potential challenges. As inequality gets even higher, we observe democracy. Even though the elites in a nondemocracy would like to use policy concessions to stay in power, current concessions in the absence of promised future concessions are not sufficient to stave off a revolution. However, if the elites maintain their monopoly of power, they cannot credibly promise such future concessions; thus, they have to give away their power – democratize – to avoid a revolution. However, as inequality gets even higher, democracy starts to become threatening for the elites because they will face highly adverse policies such as punitive rates of redistribution if they democratize. In consequence, repression begins to be attractive.”

Although the authors focus on elites and masses of citizens, they eventually consider the role of a middle class. A large body of people with an economic stake in political stability long has been thought to be a bedrock of democracy. The authors argue that the middle class is important, though for a slightly different reason: “a relatively large and affluent middle class acts as a buffer between the rich and the poor and limits redistribution. By ensuring that policies are not too far from those preferred by the rich, it discourages the rich from using repression and makes democracy more likely.”

In a similar indirect way modern industrial capitalism militates against repression of pre-democratic protests as well as reversal of democracy once it emerges. Write Acemoglu and Robinson: “repression and coups become more costly in economies where production techniques are capital-intensive, both physical and human, rather than land-intensive.” They argue that the move to industrialization has another effect: While land can be easily redistributed, it is impossible to seize human capital and financial capital is highly mobile. Moreover, high taxes on the latter discourage economic growth, limiting likely redistribution. In sum, argue the authors, “As with the middle class, industrialists have less to lose from democracy and perhaps more to lose from disruption and violence than landowners.”

Finally, the authors address the issue of globalization. They find the literature to be inadequate to make a firm conclusion, but believe that by raising the status of the poor and shrinking income gaps, globalization “reduces the intensity of the conflict between the rich and the poor.” Other potentially positive factors include increasing financial mobility, building up a middle class, and intensifying political integration. At the same time, Acemoglu and Robinson see some potential contrary trends – increasing the returns to land and limiting the options for economic reform in a democracy.

However, the authors admit that they lack sufficient evidence to be able to claim the last word. In fact, they devote an entire section to “extensions and areas for future research.” Among the topics to which they point: the military, variations in democratic institutions, alternative political identities, collective action, and the working of economic institutions.

At the end of the day, they conclude that “the future of democracy is bright. Democracy is much more likely to triumph against nondemocracy today than in the past, both in places where it has not arrived and where it has not been consolidated yet.” This would seem to be good news.

However, they warn, democracy itself might change: “we may expect the elites and conservative parties to become more powerful and democracy to become less redistributive in the future, especially if new forms of representation for the majority – in both the political sphere and workplace – do not emerge.” In this way democracy may be less transformational, which, Acemoglu and Robinson warn, for some “it may be a disappointing form of democracy.”

Maybe, but democracy should be seen as a useful means to an end, a liberal society, and not an end in itself. In reality, the chief danger of government lies not in its form, democracy or nondemocracy, but in its power, limited or unlimited. Thus, the development of a less transformational form of democracy, a government more humble in its aspirations, less willing to attempt to engineer society, both at home and abroad, would be a good thing. We can only hope that Acemoglu and Robinson are right in this conclusion.

From what stems democracy? Economic Origins only offers part of the answer. But the book is essential reading for anyone interested in the issue. Although not for the intellectually faint of heart, the book is well worth the challenge.