The One Percent Doctrine: Deep Inside America’s Pursuit of Its Enemies Since 9/11
Ron Suskind
Simon & Schuster, 2006
366 pp.

When George W. Bush came to Washington, a lot of Republicans talked about how the “adults” had taken over American foreign policy. For a time it looked like the claim might be true. 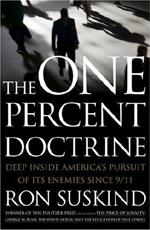 After all, candidate Bush argued that the U.S. should exhibit “humility” in foreign policy. He criticized nation-building, and especially the continuing U.S. deployment in the Balkans, a region of no strategic interest to this nation.

Secretary of State Colin Powell had differed sharply with Clinton administration officials who wanted to use force to solve the world’s problems. What’s the use of having this wonderful military, asked Madeleine Albright, if we don’t use it? She went on to try to play Woodrow Wilson in Kosovo – leaving a festering problem that the Western allies now are desperately trying to dump, but in a manner that allows them to claim success.

Today, however, the Clintonistas look like wizened professionals compared to the arrogant fools who have run U.S. foreign policy over the last five and a half years. Everywhere one sees anger at America, worsening conflict, humanitarian disaster, and rising danger for the U.S.: Iraq, Iran, Israel and the Palestinians, Lebanon, Afghanistan, North Korea, allied relations, Venezuela.

What happened? At least part of the explanation can be gleaned from Ron Suskind’s The One Percent Doctrine. Suskind, a seasoned journalist, wrote The Price of Loyalty: George W. Bush, the White House, and the Education of Paul O’Neill, which provided some of the best early documentation that the administration barely waited for the ruins of the World Trade Center to stop smoldering before it decided to go to war with Iraq.

Suskind’s latest account adds to abundant evidence elsewhere that America’s foreign policy problem is a people problem. That is, it results from how George W. Bush processes information and makes decisions. And from how Richard Cheney emphasizes ideology and sets objectives.

Nowhere does Suskind fall into Bush-bashing. Yet reading about the president’s participation in the policymaking process is depressing. He is active, not disengaged, but that is a problem.

Suskind sets the scene with a presidential briefing in August 2001. It is sobering, as one can only come away thinking about the “what ifs?” Writes Suskind:

“The analytical arm of the CIA was in a kind of panic mode at this point. Other intelligence services, including those from the Arab world, were sounding an alarm. The arrows were all in the red. They didn’t know place or time of an attack, but something was coming. The president needed to know.

“Verbal briefings of George W. Bush are acts of almost inestimable import in the affairs of the nation – more so than in the case for other recent presidents. He’s not much of a reader, this president, and never has been, despite White House efforts to trumpet which serious books he is reading at various times. He’s not a president who sees much value in hearing from a wide array of voices – he has made that clear. His circle of trusted advisers is small – smaller as president, in many ways, than it was when he was governor. But he’s a very good listener and an extremely visual listener. He sizes people up swiftly and aptly, watches them carefully, and trusts his eyes. It is a gift, this nonverbal acuity, that he relies on in managing the almost overwhelming duties of the presidency: countless decisions each day, each one important; a daunting array of issues to grasp: an endless stream of politicized experts and expert politicos, all speaking in earnest tones. What does George W. Bush do? He makes it personal. He may not have had a great deal of experience, especially in foreign affairs, before arriving in the job, but – because of his trust in these interpretive abilities – he doesn’t view that as a deficit. The expert sitting in front of him has done the hard work, the heavy lifting, and the president tries to gauge how ‘certain’ they are of what they say, even if the issues may be unfamiliar to him. Do they seem nervous or unsure? Are they fudging? Why do they think what they do … and what do they think of him? That last part is very important.

“The trap, of course, is that while these tactile, visceral markers can be crucial – especially in terms of handling the posturing of top officials – they sometimes are not. The thing to focus on, at certain moments, is what someone says, not who is saying it, or how they’re saying it.

“And, at an eyeball-to-eyeball intelligence briefing during this urgent summer, George W. Bush seems to have made the wrong choice.

“He looked hard at the panicked CIA briefer. ‘All right,’ he said. ‘You’ve covered your ass, now.'”

This is a mistake that any president could make, of course. Intelligence is rarely certain, lots of officials practice CYA, other important issues were pressing in. Nevertheless, Bush’s nature made this sort of misjudgment far more likely. And it has contributed greatly to the disaster that American foreign policy has become.

Bush does not appear often in The One Percent Doctrine, but when he does he usually demonstrates the same flaws. Observes Suskind: “Bush had long been comfortable making quick decisions without the luxury of precedent or detailed study and investigation. In his first nine months, this had prompted concerns among some senior staff in the White House, members of the cabinet, and seasoned hands in Congress – was he reading the materials, was he thinking things through?“

It has become depressingly obvious that the answer is no, though for a time Bush’s gut seemed to lead him in the right direction. He emphasized intelligence-gathering, focused on al-Qaeda and Afghanistan, and took his time before acting. But the unseen visceral decisions, most notably the early decision to focus on Iraq, took him, and the nation, down a deadly detour. Barely a week after 9/11 Bush was asking about Iraq. The first National Security Meeting of the new year dealt with planning the invasion of Iraq.

In this, Bush’s instincts were aided and abetted by Cheney’s vision. Once thought to be more of a traditional conservative, Cheney turned out to be a radical proponent of preventive war. The vice president essentially believed that a one-percent risk of a devastating event required Washington to act as if that event was certain, i.e., the “one percent doctrine” in the book title.

Alas, this approach has several problems, including the failure to adequately consider costs. Radical action to respond to an unlikely but potentially deadly event makes sense if the cost of acting is low. But if responding means certain and significant cost, perhaps even increasing the odds of the potential deadly event (terrorist attacks, and possibly with WMD), then acting, and certainly acting precipitously, is highly irresponsible.

Another problem is the standard of proof. Vice President Cheney has been the administration official most likely to make claims that flatly contradict the best evidence – Saddam Hussein was involved in 9/11, the insurgency is in its last throes. As Suskind explains: “A key feature of the Cheney Doctrine was to quietly liberate action from such accepted standards of proof, and it was effective.”

Those lax standards were reinforced by the fact that it quickly became evident what the principals wanted to hear. Observes Suskind:

“The problem of having to rely so heavily on thin, and often immaterial, facts is that the insubstantial takes on inappropriate weight. If the president suspects something – and pines, understandably, for it to be verified – that hope itself creates an effect on decision making that may well bear out, and that would lead to this, or eventually mean that. … Whole constructs, built over valuable presidential hours, collapse into nothing.”

The bottom line is that there is no evidence that administration officials consciously lied. They acted on perverse ideology and flawed instinct. They pressed for evidence to back up their preexisting desires. They relied on flimsy claims. They ignored analysts with contrary interpretations or views. And once committed, they refused to reconsider their course. It is a lot more complex than simply lying. Alas, since there is no reason to believe that these factors have changed, we remain in danger of the president & co. making more awful decisions based on flawed intelligence with no accountability.

Even if Suskind didn’t help illuminate the Big Question – how did all of these bright people mess up so badly? – The One Percent Doctrine would be a worthwhile read. Most of the book is a fascinating look at the operation of U.S. intelligence agencies, most notably the CIA. Suskind interviewed a plethora of administration officials, producing a fact-filled narrative, though one that inevitably reflects the perspective of those with whom he talked: CIA Director George Tenet comes across very sympathetically, for instance.

Nevertheless, Suskind describes how information was collected, synthesized, and interpreted. He looks at the coordination – and too often lack thereof – between agencies. He describes the cooperative efforts of allied governments (many of which would not, shall we say, do well on any democratic scale).

Some significant successes emerged, where plots to harm Americans were thwarted. There were busts as well: by Suskind’s telling, some supposedly significant al-Qaeda figures turned out to be of only marginal value even after intensive, to put it politely, interrogation.

The bottom line is that good intelligence, both technical surveillance and human infiltration, combined with international cooperation, is the foundation of any anti-terrorist effort. To the extent other policies – undertaking an unpopular war, reflexively embracing hawkish Israeli policy, and blustering arrogantly about most everything, for instance – diminish the willingness of other countries to aid Washington, the U.S. will find it harder to protect its own citizens. Moreover, a high profile “pro-democracy” campaign may have even greater impact on the willingness of targeted states to help Washington when the latter requests that a financial transaction be blocked, a suspicious group be watched, a potential terrorist be arrested, or a dangerous organization be shut down.

It was frustration at these failures, not partisanship, in Suskind’s view, that led so many CIA and State Department officials to criticize the Bush administration. Writes Suskind:

“Their reactions weren’t political; they were structural. What those in both policy shops knew – like a host of generals at Defense – was that even in the high-stakes areas of foreign policy, the basics of analytical due diligence had, in fact, been ignored, or tapped only when a ‘product’ was needed to support policies that the White House had already settled on. Their conclusion – much like that of [Treasury Secretary Paul] O’Neill, a conservative Republican, or [NSC terrorism analyst Richard] Clarke, a registered Republican who had long been fiercely loyal to codes of silence – was that this presented institutional dangers for the government and for the country.”

The book ends on a somber note. Three years of unexpected turmoil and violence in Iraq seems to have chastened no one in the Bush administration; instead, officials have devoted much effort to rooting out intelligence analysts more interested in providing accurate information than backing administration fantasies. And the administration’s many blunders and missteps seem evident even to al-Qaeda: the consensus CIA view was that Osama bin Laden’s broadcast shortly before the 2004 election was intended to help reelect Bush, for the latter’s policies act as a recruiting pitch for bin Laden.

“And so, on we go, blindly – as so many people do, always, in their own time – through the age of terror,” concludes Suskind. So we do. But the greatest tragedy may be that our own government is doing so much to blind us.