At the Point of a Gun: Democratic Dreams and Armed Intervention
David Rieff
Simon & Schuster
270 pp.

It appears to be the season for second thoughts about American intervention in Iraq. William F. Buckley says the war was a mistake. National Review‘s John Derbyshire confesses the same error. Even Sen. John Kerry (D-Mass.) finally seems to oppose an endless occupation. Most important, the American people have tired of the Bush administration’s utopian fantasies. Periodic PR offensives after endless “turning points” have failed to halt the administration’s long-term slide in popular support. 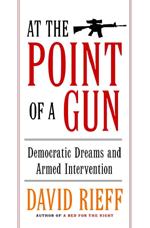 Presidential cheerleaders remain, of course, but most of them have been forced to temper their optimism. “Despite all appearances, we’re really doing okay” has become the new mantra. “Just wait 10 or 20 years, and we think we will be vindicated,” is another common slogan. These claims replace promises of transforming the world by spreading, truth, justice, democracy, and whatever else happens to be on the neoconservative agenda any particular day.

The misbegotten war in Iraq does more than discredit the Bush administration’s Mideast policy. It effectively destroys the case for humanitarian intervention and nation-building. This administration might be uniquely inept and foolish, but the basic problem is the policy, not the implementation. An Iraq invasion and occupation conducted by a President Kerry or a President Clinton would have been no more likely to deliver Western-style democracy.

One of the most serious intervention apostates is writer David Rieff. Long among the most avid advocates of humanitarian war-making, Rieff has been clobbered by reality. Every additional day the U.S. stays in Iraq reinforces the truth of his reformed views.

“At the time of the Kosovo war, I had written that, if I had to make the choice, I would choose imperialism over barbarism,” he explains. “In retrospect, though, I did not realize the extent to which imperialism is or at least can always become barbarism.” This admission alone makes At the Point of the Gun worth reading.

Over the last decade a near consensus has developed in favor of intervention for “moral” reasons. It is “a view shared by figures with otherwise little if anything in common in their view of the role of international institutions or the authority of international law as Kofi Annan and Paul Wolfowitz,” notes Rieff. At the Point of the Gun includes some essays written when he also was part of that consensus.

Even today he does not argue against humanitarian intervention in all circumstances. Rather, he writes, “What I do not stand by, what indeed this book is largely an argument against, is my previous conviction that humanitarian military intervention, whether to alleviate massive suffering or rectify grave human rights violations, should be the norm.” Consistency “is a terrible error when one is talking about wars.”

Rieff has a good eye for detail in writing about several of the world’s well-publicized conflicts. Most of his essays include an afterword reflecting Rieff’s current thinking. Most notably, Rieff made his name pushing for intervention in Rwanda and Kosovo. About both he has had second thoughts.

Of the former, he writes, “I made allowances and apologies for the [Rwandan Patriotic Front’s] own ruthless conduct that, while not on the same order of magnitude as the genocide within Rwanda, was nonetheless intermittently murderous and barbarous.” Once the group won control in Rwanda, it then created “one of the great crimes of our time” by intervening in neighboring Congo. In short, what seemed morally obvious was not.

He has learned a painful lesson. In early 2004, “talk of the need to launch a military intervention on humanitarian grounds again came to the fore,” notes Rieff. This time it was Darfur in Sudan. Yet although there had been killings, they did not constitute genocide as that term was always understood. Indeed, warns Rieff, “if massacre was now to become proof positive of genocide, legally defined, then basically every intrastate war taking place on earth could be described as genocidal, and this would make the term itself utterly incoherent.”

Rieff’s disappointment over Kosovo is, if anything, more acute. His extraordinary admission should give pause to any enthusiast for humanitarian warmongering. Writes Rieff:

“[W]hat postwar Kosovo has demonstrated is that Kosovar Albanians were just as efficient at ethnic cleansing as their Serb counterparts had been when Belgrade and Orthodoxy held the upper hand. Since 1999, something on the order of a quarter million Serbs and Roma have been forced to flee the province, all under the largely silent eye of United Nations and European Union officials who preferred to claim that things were largely progressing in the right direction. Only riots in the ethnically-divided Kosovan town of Mitrovica in 2004 and a devastating report on the ethnic cleansing issued by the Office of the UN High Commissioner for Refugees that same year forced the so-called international community to come clean.”

Rieff views Iraq through the prism of his disillusionment with past humanitarian wars. Rieff looks at sanctions, which ended up “choosing American security over Iraqi mass suffering.” He also offers a detailed look at the role of Shi’ites in Iraqi politics – “The Shi’ite Surge,” as he titles it.

Most painful to read, however, is Rieff’s chapter on the mess that Iraq has become. He begins simply: “On the streets of Baghdad today, Americans do not feel welcome.” This after Bush administration officials promised that the invasion would generate a shower of flowers and good feelings. It is not clear whether arrogance or incompetence is the greater vice, but the Bush administration has exhibited both in abundance.

Writes Rieff, “despite administration claims, it is simply not true that no one could have predicted the chaos that ensued after the fall of Saddam Hussein. In fact, many officials in the United States, both military and civilian, as well as many Iraqi exiles, predicted quite accurately the perilous state of things that exists in Iraq today. There was ample warning, both on the basis of the specifics of Iraq and the precedent of other postwar deployments – in Panama, Kosovo, and elsewhere – that the situation in postwar Iraq was going to be difficult and might become unmanageable.”

Rieff highlights not only foreign horror but domestic hypocrisy. In a discerning chapter on the weird marriage between “the human rights left and new imperialist right,” he dissects liberal criticisms of neocon warriors. Observes Rieff, “for activists to now, after a decade of calling for the U.S. to unleash its power, lament the demise of multilateralism and regimes of international law is grotesque and unseemly.” These folks “seem to behave as if one can have Nuremberg-style justice without a Nuremberg-style military occupation.”

Yet because the neoconservatives have triumphed politically and are most responsible for the disaster in Iraq, Rieff most targets them for his verbal shelling. Virtually none of their predictions have come true.

“Saddam Hussein had no nuclear arsenal; Iraqi oil revenues were insufficient to cover even a fraction of the cost of the reconstruction; U.S. troops have earned the enmity of many of the Iraqis who had supported the invasion; and far from becoming a bastion of U.S.-style democracy, Iraq’s future is likely to be determined by a Shi’ite religious hierarchy that has little sympathy for any meaningful separation of church and state. Thus do neoconservative dreams turn to dust in Iraq.”

What the neocons have managed to do is inadvertently illustrate the limits rather than the possibilities of unilateral American power. In an attempt to avoid the obvious, some of them now blame the administration. It seems a bit ungrateful for neocons to trash the president who gave them the war that they desperately wanted. But rats naturally desert a sinking ship. The neocons’ only hope to maintain public credibility is to shift the blame. Thus, they claim, the administration should have been willing to use a lot more troops, drop a bunch more bombs, and kill as many additional people as necessary.

Thankfully, the American people appear to have learned the right lesson from the Iraq debacle. They have stopped listening to “the best and brightest” who have been not just wrong, but disastrously wrong, at every turn.

At the Point of a Gun is a compelling read. David Rieff deserves praise for skillful analysis and, more important, ruthless honesty. In this way he contrasts sharply with President George W. Bush, who took the U.S. into an unnecessary war based on false pretenses, and with the neoconservatives, who continue to bungle policy and waste lives. It’s time for Washington policymakers to follow Rieff’s lead.