The spectacle in the US Capitol Building last night was downright retch-worthy. And we are not actually referring to the detestable little warmongering clown who preened at the podium in a sweatshirt and cargo pants, offering endless lies and hideously false promises about why American taxpayers and consumers are being bled to death in a pointless and unnecessary war.

No, we are referring to the pathetic gaggle of Representatives and Senators who applauded relentlessly and uproariously in response to the casuistry of the tinny poseur who stood before them, albeit one who should have never been granted that august platform in the first place.

After all, the mountebank who leads the rapidly decaying remnant of a nation that was never built to last anyway has been able to bring the world to the brink of economic catastrophe and even nuclear war for one reason alone: Namely, because the bipartisan duopoly on Capitol Hill has shoveled gargantuan sums of money into Ukraine and Washington’s proxy war on Russia with mindless negligence.

And on that score the numbers tell you all you need to know. To date, Washington has authorized $65 billion of economic and military aid, with other NATO nation’s throwing-in $32 billion additional. On top of that, the pending Omnibus Abomination will authorize $45 billion more, which Zelensky has already implied is not nearly enough.

Still, that’s $142 billion and counting, which in turn has no possibility of enabling the Ukrainian victory that Zelensky promised. And that’s also 91% of Ukraine’s 2020 prewar GDP of $156 billion, and an order of magnitude more than the under $100 billion GDP that is left before Russia’s impending winter offensive finishes it off completely.

Stated differently, these war-besotted fools are enabling the absolute destruction of the cities, towns, villages, countryside and economy of what was the world’s 30th largest polity, even as its soldiers and citizens on both sides of the front lines are being slaughtered in their hundreds of thousands.

Yet contrary to Zelensky’s deceitful rhetoric there is nothing at stake of importance to either humanity or the security of the "free world" or most especially the safety and liberty of the American homeland. Absolutely nothing at all – -and that includes all of the War Party’s cant, robotically repeated by Zelensky last night, about the rule of law, the sovereignty of borders and the freedom of the peoples of Ukraine and their neighbors.

As we have repeatedly documented, this is not a Russian invasion but a civil war in the "borderlands" territory  (i.e. "Ukraine" in Russian) that prior to the communist tyranny of the Soviet Union was always a vassal and sometimes integral part of greater Russia. The present civil war, in fact, was instigated in 2014 by the illegitimate government installed in Kiev after Washington’s coup d’ tat against the duly elected and Russian-friendly president.

This Washington managed "regime change", in turn, set the regions of the artificial state of Ukraine against each other based on long-standing differences of language, religion, ethnicity and economics, among others. And when the Russian speaking populations of Crimea, the Donbas and the Black Sea coastal areas sought separation owing to fears of repression by the Ukrainian nationalist and neo-Nazi politicians who took control of the government in Kiev, the latter brought the bloody violence of the Ukrainian Armed Forces, including the overtly neo-Nazi Azov Brigade, down upon them.

That is to say, the Kiev instigated civil war against the Russian speaking populations of the east and south had been raging for eight years before Putin finally responded to their pleas for overt military assistance; and also after upwards of 14,000 separatist military and civilian personal had been killed by Kiev’s violent onslaught against what was purported to be its own population.

It also came 14 years after Putin had insisted (at the 2007 Munich Security Conference) that Ukrainian ascension to NATO and the emplacement of nuclear missiles within minutes from Moscow was a red line that could not be crossed, yet which action was virtually certain by February 2020.

Finally, the "invasion" also came after 10 days of massively stepped-up Ukrainian artillery attacks on the Donbas, which by every signal of military action and logistics implied that a Kiev "invasion" of the separatist republics was imminent.

In short, "partition" of what had been the tyrannical Soviet Socialist Republic of Ukraine, an entity that had never existed until it was brought to life at the end of gun barrels by Lenin, Stalin and Khrushchev, had always been the end game. It was the clumsy hegemonist neocons of Washington who finally catalyzed the split-up after 2014 owing to their own profound ignorance of the region’s history.

Indeed, the die was caste during the last legitimate election in 2010, when the Russian-friendly candidate, Yanukovych, won the national election by a hair, on the back of 60-90% margins in the east and south (blue areas of the map) against the Ukrainian nationalist candidate, Tymoshenko, who won the less economically prosperous areas of the center and west by similar 60-90% margins (red areas).

Indeed, one merely needs to note the city names in the blue areas of the map to understand that the war in Ukraine is about partition, not "freedom", as Zelensky so risibly suggested last night: Kharkiv, Luhansk, Donetsk, Mariupol, Zaporizhia, Kryvyi Rih, and Odessa all voted blue big time in 2010, have been at the front lines of the civil war since 2014 and mostly voted to leave Ukraine and join Russia during the September referendums.

To be sure, the Washington hegemonists, neocons and warmongers will insist that these referendums were invalid, but that doesn’t explain the dog which is not barking. To wit, in the Russian-speaking blue areas of the map, there have been virtually no reports of a "resistance" movement among the local populations in opposition to the Russian "occupiers" and the purported quislings who run their separatist governments and militias. If anything, they believe they have been "liberated", not "occupied".

So here’s the ultimate insanity of last night’s spectacle and the $141 billion that the US/NATO will have poured into what amounts to a de facto genocide upon the peoples of what is now this wretched stretch of black earth. That is to say, the clear outlines of a diplomatic solution and the potential armistice borders were drawn by the people themselves in the 2010 election.

In fact, with Putin’s referendums already have been completed in most of the blue areas, what remains is to silence the guns, ratify the territorial status quo and enable an international peace conference to carry to its logical conclusion the partition of post-communist Ukraine that was implicit in the 2010 election results.

As it has happened, post-communist Yugoslavia did it and Czechoslovakia did it and all the effected populations are far better off. It’s now time for the borders created by Lenin from "New Russia" and from parts and pieces of the Czarist empire and post WWI Galicia, by Stalin from WWII era Poland, Hungary and Romania, and by Khrushchev from Russian Crimea to be assigned to the dust bin of history.  That the world may draw back from the dangerous precipice on which it is now precariously perched, therefore, depends only upon revocation of the dead-hand of the Soviet butchers and tyrants. 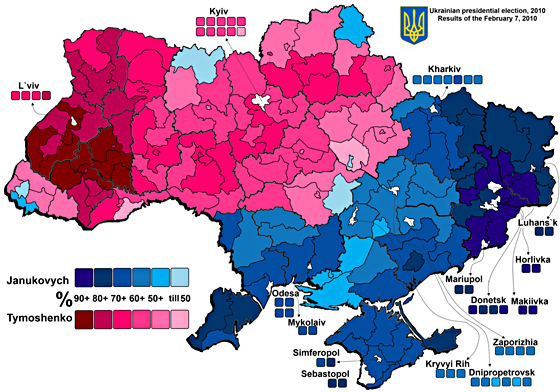 The irony is that Putin would buy this solution in a heartbeat because he doesn’t want to rule (and heavily subsidize) the rump of  Ukraine depicted by the red areas above, anyway. We doubt that he is as evil as Washington claims, but we are quite sure he is way too smart to want to rule what would be the hostile populations of Kiev and Lviv – to say nothing of the even more hostile peoples of Poland, the Baltics and western Europe.

Of course, Zelensky and his claque of bloodthirsty destroyers would scream to high heaven. Well, unless they were given safe passage to transport themselves and the billions they have stolen from American taxpayers and socked-away in secret bank accounts to safe havens far from the homelands they have destroyed by their obstinate promulgation of gigantic lies.

That is, this misbegotten war is not about freedom and democracy in the slightest. Ukraine is every bit as authoritarian and corrupt as Russia, and likely now more so. All of the opposition press has been shutdown or taken over by the state; most of Zelensky’s opponents have been arrested or killed; there are no longer any true opposition parties; the national security apparatus has been largely purged of dissenters; and Zelensky has lately even attacked the Russian Orthodox Church.

Still, there can be little doubt that the creepy little con man who last night recited the lines written by this neocon/NATO puppet-masters with just the right amount of Ukrainian accent could be bought off for even a small part of the billions he has already stolen. Surely, a man as small and unaccomplished as Zelensky would have a price equally modest.

No, the problem lies in last night’s audience, not the poseur at the podium. The neocon infested Republican’s are trying to break the habit of embracing the Deep State’s Forever Wars, but the progress is painfully slow and limited to a few stalwarts like Rand Paul.

But there is hope for the GOP, even as the Dems remain steadfastly beyond rescue from the grips of the war fevers so pathetically on display in the House chamber last night.

You could see it as they continuously leapt to their feet and energetically slapped their hands together upon the slightest inanity emanating form the well of the House. That’s because not only is this war not about freedom and human rights, nor even the rule of law, border integrity or the rules of a peaceful, stable international order.

Actually, they were  yelping in schoolboy fashion against the demonized President of the Ukraine who purportedly put Donald Trump in the White House and badly loosened their grip on political power for a longtime to come.

At the end of the day, the motive power of this deadly, despicable adventure is the Trump Derangement Syndrome. And given the everlasting damage it will thrust upon American taxpayers, workers and consumers – to say nothing of the global economy – that’s about as sick as it gets. The minor ruckus of January 6th doesn’t hold a candle.