If you want to know why America is going to hell in a fiscal hand basket, it’s because the last vestige of opposition to the Warfare State and the fiscal muggings of the military/industry/intelligence complex has utterly evaporated.

We are referring, of course, to the delirious Russophobia that has overtaken the Dems and the liberal media since they had the daylights shocked out of them by the 2016 election – a state of mental derangement that has degenerated into downright hysteria since the Helsinki Summit.

It had already been the case that anti-Russian policy actions (e.g. sanctions) pass through the Congress with bipartisan greased lightening, and defense appropriations had exploded to the highest level in postwar history in real terms.

So we are already spending 30% more than at the peak of the Cold War, but you haven’t seen nothing yet. Not now that Rachel Maddow and Anderson Cooper have become rabid war hawks, virtually begging for military confrontation with Russia and its pipsqueak economy and pint-sized military.

As we keep mentioning, the GDP of the NATO-29 is $36 trillion, and that is 26X that of Russia. Likewise, when you add the NATO-28’s military spending of $280 billion to Washington’s humungous defense budget, the total is nigh on to $1 trillion per year – or 16X Russia’s entire military expenditure of $61 billion per annum.

We emphasize this massive imbalance of economic resources and military might as between NATO and Russia because it is the very reason why the bellicosity and fiscal largesse from Capitol Hill won’t diminish any time soon. That is to say, the Imperial City politicians are in a full frontal bully mode because they believe (not unreasonably) that the can huff, puff and spend with relative impunity.

This is not at all like the days of the real cold war in the 1960s and 1970s when America actually did face a deadly dangerous enemy; and when it was also evident to most rational people that rash provocations could be fatal and that the Cold War was something to be vigilantly endured, not won.

Accordingly, defense strategy was based on MAD or mutual assured destruction because all except an ultra-hawkish fringe in Washington could see that even attempting to "win" a nuclear arms race and war with the Soviet Union was a recipe for eventual incineration of the planet.

This meant, in turn, that by FY 1979 when the triad nuclear deterrent had been fully built and paid for and the folly of the Vietnam land war in Asia had been fully purged from the numbers, the defense budget totaled only $385 billion (in 2018$).

Significantly, that was the same $385 billion level (2018$) that had prevailed back in FY 1960 right after Nikita Khrushchev had promised to "bury" America. Yet the nation’s greatest war general then in the Oval Office, President Dwight Eisenhower, thought that level was adequate to insure America’s security, and even warned in his parting address to Congress about the dangers of excessive military spending and the insatiable fiscal appetites of the military-industrial complex.

Our point is that the sobriety of purpose and military spending restraint that went with it under Dwight Eisenhower and Jimmy Carter alike has vanished in the aftermath of the Cold War’s end and the subsequent rise of the Russophobe branch of the War Party among the Dems and mainstream media.

And as this phony Cold War 2.0 has gotten agitated to a fever pitch, the military/industrial/surveillance complex surely thinks it has died and gone to heaven. After all, Washington is now spending 85% more against essentially a nonexistent threat than it did during the pre-1980 era of Cold War 1.0 when the Soviet nuclear threat was palpable.

Indeed, in their mindless and unhinged anger at losing the 2016 election to Donald Trump, the Dem/liberal media wing of the War Party has so demonized Putin and so grotesquely exaggerated the Russian threat that they literally cannot see straight or assess actual facts with even a modicum of rationality and proportion.

That’s more than evident in their hysterical response to Trump’s unwillingness to attack Russia for its purported election meddling; and in their utter incapacity to see that Mueller’s grandstanding indictment of the 12 Russian spear-phishermen is not Pearl Harbor at all – and much more like the false flag hurled up from the Gulf of Tonkin by LBJ.

In ordinary circumstances it might be the case that the present Russophobe hysteria gripping the Imperial City would eventually burn itself out. At length, Chris Cuomo (CNN) and Rachel Maddow (MSNBC) would be exposed and discredited as the modern day equivalent of Betty Parris (age 9) and Abigail Williams (age 12) – the cousins who famously incited the Salem witch trials in 1692.

But the problem at the moment is that the nation’s fiscal accounts are exploding wide-open in the here and now. What is unfolding is a tripartite perfect storm consisting of:

To be sure, the deficit eruption now underway has been obfuscated by the vicious partisan warfare attendant to the Helsinki Summit and its aftermath, but the figures are published every day by the US Treasury and they do not lie.

Moreover, the annual borrowing rate (which exceeds the reported deficit owing to accounting shenanigans which cause it to be underreported) is going to accelerate sharply from here. That’s because the three drivers – defense spending, interest on the debt, and the GOP’s reckless, unfunded tax cut – are now literally off to the races.

Thus, for the first nine months of FY 2018 ending in June, gross interest in the Federal debt total $414 billion and was up 18% from the $376 billion recorded during the like period a year ago.

At the same time, the tax cut shoe is just beginning to fall. Owing to a revenue windfall from a surge in end-of-bubble realized capital gains, GOP propagandists have been touting "surging" collections.

Actually, that’s a bald-faced lie and is based on the estimated tax payments made in April, not the actual run rate of post-tax cut receipts. However, collections since May 1 leave little doubt that if you massively cut tax rates, you also get a big drop in revenues – notwithstanding any so-called flow-back revenues from more growth.

After all, under the Trumpite/GOP tax bill, Federal receipts are projected to hit a non-recession low of 16.6% of GDP for the year ahead. Obviously, therefore, you need $6 of GDP growth for every $1 of tax cuts to break-even, and that’s not going to happen in a month of Sundays.

Accordingly, from May 1 through July 17th, corporate tax collections totaled $51.5 billion. That represents a huge 36% reduction from the $80.3 billion collected during the like period last year.

Similarly, withholding collections for both income taxes and social insurance taxes amounted to $492.2 billion since May 1st. By contrast, during the like period last year withholding receipts were $515 billion – meaning that receipts have already declined by 4.5%.

But here’s the thing. While the US economy is in the waning days of the current expansion cycle at 109 months of age, total wage and salary compensation was still rising at a modest pace, even before the tax cut became effective in the withholding tables in February.

Accordingly, in the absence of the tax cut, withholding receipts during the May 1 through July 17 period would have been $534 billion – far above the $492 billion actually collected during that 68-day period. That is, the tax cut has reduced receipts by 8% at a time when the principle drivers of spending – defense, interest and Medicare social security – are rising at an accelerating pace.

Stated differently, the Federal budget is coming apart at the seams, but the policy process is now completely paralyzed when it comes to the moving parts which make a difference.

During the year just ahead, Social Security, the medical entitlements, veterans, and military and civilian retirement programs will cost $2.64 trillion. On top of that comes $800 billion for national security and law enforcement and a further $400 billion for net interest (net of trust fund receipts).

Altogether that amounts to $3.85 trillion – meaning that via bipartisan consensus 86% of the spending side of the budget is off the table; and by the writ of the Trumpite/GOP majority, 100% of the revenue ledger is excluded as a source of deficit reduction.

In short, the Federal budget has become a doomsday machine. For all practical purposes, 98% of the budget (revenue and outlays) has been taken off the table in the face of built-in structural drift that is heading for $2.4 trillion annual deficits by FY 2028.

But when you overlay, the full frontal hysteria over the Donald’s purportedly treasonous attempt to move toward rapprochement with Russia what you have is this: $17 trillion of built-in deficits, and a $37 trillion public debt before the end of the current 10 year budget horizon – with no possibility of remediation. 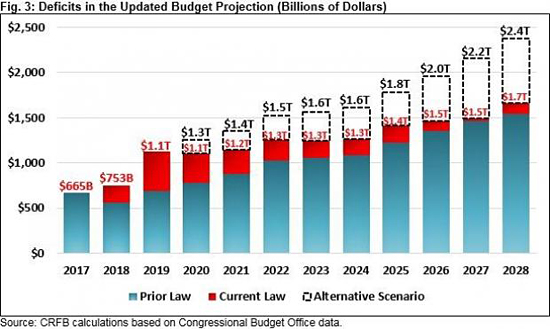 But actually, the fiscal armeggedon is likely long before that because there positively will be a recession before 2028. Yet the CBO baseline which provides the economic assumptions for the above chart assumes a preposterous 232 month expansion – double the longest in history, and nearly 4X the length of the normal expansion.

So when you overlay even a moderate recession on the above chart, you get $20 trillion of built-in deficits and a public debt of $40 trillion by 2028. 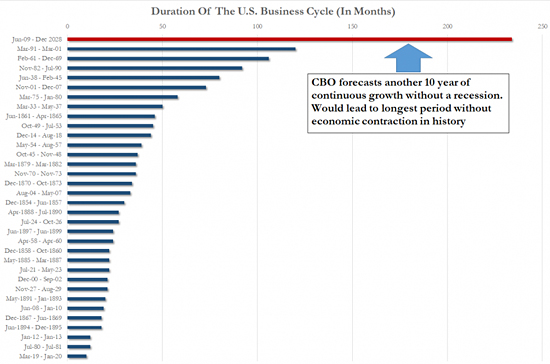 In part 2 we will address the pitiful base of facts on which the current Russophobe hysteria is based. But here is a spoiler alert.

The fact is, the so-called meddling by the 12 Russians – that has produced cries of Pearl Harbor from the Dems and MSM – actually represented, if it happened at all, little more than spear-fishing operations by elements of the Russian security services that were directed at both parties; and it was dramatically less provocative and aggressive than the global malware implantation campaigns conducted by the far larger operations of the US intelligence community through TAO (tailored access operations), among others.

As documented by a recent report in Real Clear Investigations,

RNC emails were stolen through the same spearphishing scams used against Democrats,” a senior U.S. intelligence official familiar with the investigation told RealClearInvestigations. “In fact, prominent Republicans were targeted and similarly victimized by the disclosure of sensitive emails during the campaign.”

In fact, US intelligence officials say the attackers penetrated GOP organizations at both the national and state levels, as well as the individual level, and successfully “exfiltrated" Republican emails during the 2016 election cycle. They add that Trump officials themselves were targeted by Russian intelligence late in 2016, often by phishing schemes, in which fraudulent emails seemingly from trusted sources (e.g. the government, banks or Google) are sent to gain access to personal information

The Justice Department, which is working with the Mueller investigation, has compelled congressional committees investigating Russian election interference to redact information about Russian intrusions at the RNC and other Republican targets from their reports, claiming it is classified at the highest levels.

Here’s the thing. Spear-Phishing is to the internet as the Pope is to Catholicism. It comes with the territory.

During the most recent year (2016) investigated by Internet security experts, there were more than 255,000 discreet spear-phishing attacks, conducted from more than 195,000 domain names. And only a small portion of them represented governments and their intelligence agencies.

In short, spear-phishing is a massive component of global commerce and communications and the digital grids through which they are conducted.

It is not remotely an act of war against America, and a pretty hideous excuse for policies that threaten to bankrupt the nation.